Tony Cummings reports on the man with the "It Is Well" radio hit, DAVID DUNN

Cross Rhythms Radio is currently playing the powerful worship song "It Is Well" by David Dunn. The track is from David's debut release for BEC Recordings 'Crystal Clear' and in many ways is the culmination of several years of developing his spiritual and creative faculties. David was born on 25th May 1984 in Midland, Texas. At college he studied engineering but also began playing in churches and coffee houses and recorded a self-titled EP. Shortly afterwards he went to Africa for a year-long humanitarian trip.

In what he describes as "probably the biggest growth period of my life" David returned to the States with a bad case of malaria and plenty of new ideas for songs. His rich voice gained him an appearance on Season Two of NBC's The Voice talent search and in 2012 he released two more independent projects 'For The Life Of Me' and 'This Is Christmas'.

However it was the signing with Seattle's BEC Recordings which has proven to be the singer/songwriter's most significant opportunity, the company releasing first the 'Crystal Clear' EP in 2014 followed by the 'Crystal Clear' album in 2015. Said David, "The record making process was a pretty easy little transition from what I normally do. They gave me a lot of creative control. Basically all the normal creative control that I would have on my indie projects. We put out this first single ['Today Is Beautiful'] and there's been some great people helping to get it onto radio and it's been nothing but positives up to this point. So getting into it all is a little scary, you hear lots of horror stories about signing with labels. You give them a lot of power - giving my musical future into somebody else's hands. That's a scary thing to do. It took me a couple of years to pull the trigger on it and thus far it's been great."

David had a difficult time in Africa. He was asked whether any of his experiences were reflected in the songs on 'Crystal Clear'. "The way I write songs, there's often snippets of things that I'm learning in my life. They're extensions of what I'm going through, what I'm learning, who I am. So I don't think there's specifically instances in any of the tunes on 'Crystal Clear' that are of 'Hey! This happened in Africa.' But I think that period of time, that year, moulded me into the artist that I am now." David spoke about his "It Is Well" Cross Rhythms radio hit. "Most of the record is dealing with this idea of somebody going through a hard time. Something bad is happening to them, there's some kind of trial that they're in the middle of. They look up to the sky, shake their fist at God, and say, 'God, where are you in this? What are you doing? Why are you allowing this to happen?' Kinda the Job mentality, right? All these crappy things happen to Job and he looks up to the sky and questions God. 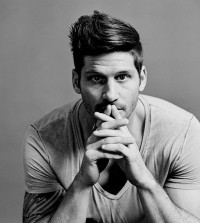 "There's been a lot of things in and around my life that have sort of come to that. I have a roommate who's an atheist and I think this is where this all started. That's basically why he's an atheist. He went through some really terrible stuff, shook his fist at God and then decided he's not really there. There's no way a God that would love me would let these things happen to me. And I get it. I totally get it. I think that's a completely valid thing to think as a human being, and I don't know what the answer is! I learned that as I was struggling through these tunes: I don't know what the answer is. I don't know why God does what he does. But he's God. And what I do know is that he loves. He does. He does love. That's what the first track is about. There's a line in 'It Is Well' that says 'I don't know, but I do know that he loves, and it is well.' That's what that song is about. It's going: these things happen. Depression, oppression, all of these different things that people struggle with that just are terrible. We're humans, and that's a part of life, and it kinda sucks. There's big portions of life that are just a continual battle. Just running up a hill. The only thing that you can cling to, that I see as a participant and a fellow sufferer, is that you have to believe and know that he loves. And he's watching! He knows what's going on, and is in control."

David continued, "The lead single, 'Today Is Beautiful', is about this. These things are happening to you. You see them from how you see them. And because you see them how you see them you're not getting the entire picture. You're seeing that this is a bad thing because it feels like a bad thing, because this bad thing happened in this moment that I'm in, when in reality, it could be the best thing that ever happened to you. Africa was a terrible thing when it was happening to me. I didn't like it when I was there, I was suffering, I felt like what I was doing was failing, I got malaria and the whole nine yards. I wasn't exactly shaking my fist at God, but I did think it was terrible, because all I could see was me being in Africa. But now, seven years removed, I can see it's one of the best things that probably ever happened to me. 'It Is Well' is just a declaration. It's saying that he does love, and because he does, I'm going to say that it is well. It's sort of the same idea behind the original hymn. It's the same song with big synths and pianos and beats."

"Today Is Beautiful" is inspired by a trip to Disneyland. Said Dunn, "I have 11 nieces and nephews. We were at Disneyland with all the little munchkins running around. The slogan at Disneyland is 'The Happiest Place On Earth' and my three-year-old nephew Brady was running between two rides and had a complete and utter meltdown because his older sister wouldn't let him push the stroller. To him, that was the biggest thing ever. He was miserable because he wasn't getting what he wanted, even though he was in the happiest place on earth. So his dad and my brothers, a little later, we were laughing about it and I started thinking about that as a great picture for humanity. We totally do that exact same thing. We focus on these itty bitty problems that make us miserable, and that's all we can see. Really all we have to do is lift our eyes from that problem and see it from God's perspective. Even though we won't understand God's perspective, we realise that he has a perspective at the very least. You're in Disneyland, right? And that problem that is making you miserable is either a tiny thing, or it could even be a big thing. Like you got fired from a job and you see it as a terrible thing but from God's perspective it could be a chance for you to become more like him. God's perspective is different to ours."

One of the darkest sounding tracks on the project is "Nothing Left". Commented the songsmith, "It's actually a tune written from a C S Lewis quote which says, 'To love at all is to be vulnerable.' It's sort of a tune that is trying to capture love as a choice rather than a feeling. It's something that even though it's hard to go through, and sometimes you get squashed when you love another person. . . If another person doesn't love you back or treat you correctly they can really smoosh you. They can tear you apart. That being said, it is the thing that is most worthwhile. It's a completely worthwhile thing to do anyway. It's why we exist. We exist to relate, and we relate by loving. It actually is my favourite song on the record melodically and also because I love talking about love as what I think it is rather than what our culture says it is. I reject the normal definitions people use for love. So that's a part of what that song is about. It's redefining love as a worthwhile thing that you choose to do, even when it's hard and when it's terrible."