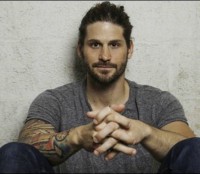 It was only last year that Cross Rhythms reported on the Nashville-based singer/songwriter David Dunn. But such was the sheer brilliance of his 'Yellow Balloons' album that I couldn't resist the opportunity to talk to the Texas-born songsmith about his epic album and the whole songwriting process. Here is what he said.

Tony: Are you playing guitar and keys on 'Yellow Balloons'?

David: I am - guitar, keys. Josh [co-producer Josh Bronleewe] sings some bvs on there as well, and of course there's a whole lot of synths and drum parts.

Tony: Keeping everything under your control has given you a distinctive sound. Electro-pop is unusual for a singer/songwriter.

David: I'm trying to be a creative. It's not that I hate it but I'm trying to not be defined as a singer/songwriter. There's these connotations that go along with singer/songwriter that I would like to not adhere to. I think of Bob Dylan and Tracy Chapman - folksy, wordy, poetry. I care just as much about the musical arrangements as I do about the writing. I like them equally; they're equally important in my estimation. Being a 'singer/songwriter' is something I'm taking a soft step away from - just that title.

Tony: I love the opener on 'Yellow Balloons', "Kingdom". Did that start with the funky guitar riff?

David: That song actually started with the funky riff. I was messing with the guitar part and I went, 'That sounds pretty cool. I wonder if I can do something on the top of that?'

Tony: Where did the lyrics come from?

David: To give you a snapshot, the record is mostly about Heaven and little kids: those are the two major inspirations. So "Kingdom" is about Heaven, and it's me contemplating what it is. If you read the parables in the New Testament, Jesus is constantly talking about the kingdom of Heaven. He'll start them off with that - 'The kingdom of Heaven is like...' - then he lists something off that's really bizarre: there's no harps, no angels, no fluffy white clouds. That always confused me. I was listening to a podcast recently of my dad giving a Sunday school back in Texas, talking about the kingdom of Heaven and defining it rather than something that lives up in the clouds as a place where God is. He was specifically talking about the Lord's Prayer - 'Thy kingdom come, thy will be done, on earth as it is in Heaven.' So how he encompassed Heaven was, 'Heaven is a place where God lives and where his will is done. Any time we do his will, any time we follow him, we're bringing Heaven to earth.' So "Kingdom" is an attempt to explain the kingdom of Heaven the way that Jesus does in his parables.

Tony: "Grace Will Lead Me Home" is another song on the album pointing towards Heaven.

David: Yeah. That's probably the most different song on the album. I do a lot of writing for other people, and I initially wrote it without any intentions to recording it myself. I turned it in to my publisher and he passed it along to some of the people involved in the record-making process for 'Yellow Balloons', and it wasn't until they mentioned it that I thought, 'This song fits on my record!' It was supposed to be more of a corporate worship song, which is not my normal shtick - not because I hate worship music: I'm trying to sing life songs rather than things we do together. I do love the song, but I had to get used to the idea of recording it. It's another song about Heaven - mostly taking grace into consideration. A lot of the song is describing what we think Heaven is going to be like, how the entire process from birth until we're there with Jesus is a gift. We only survive because of God's grace.

Tony: "History" is an intriguing song. Where did that come from?

David: The start of the song is where the song came from. That one is the only song on the record that's not about little kids or Heaven, and you are the first person who ever asked me about that song. It started with me sitting outside on my back porch and talking with somebody about what my back yard would look like if Adam and Eve hadn't eaten the apple. I have three fruit trees that I planted last spring, and one of them had just died because I have not so great of a green thumb. That kind of started us talking about what it would look like and the song sprung out of that.

Tony: Our reviewer has said that the track "Yellow Balloons" is the most moving song he's ever heard.