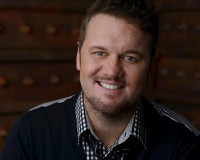 Widely described as the "greatest voice in Christian music", lyric tenor David Phelps has come a long, long way since he first recorded independent album 'Journey To Grace' in 1994. The Texas-born singer became a firm favourite with the Southern gospel constituency when he joined the Gaither Vocal Band in 1997 while his solo albums for Word and the Gaither Music Group have been highly successful. His latest project, 'Classic', puts his rich vocal tones across elegant orchestral accompaniments. He took time off from his busy schedule to be quizzed by Cross Rhythms.

Tony: Would you say you're still embracing new styles?

David: Yes. I've always been known for being eclectic. I consider myself more like a stylist, and I have a classic type of voice. That fits who I am and who I am as an artist, but for the song selection of 'Classic', we really wanted to fill it with songs that on some level felt familiar, like a warm blanket. We were able to compile a few traditional pop things like "What A Wonderful World", and then some sacred things as well like the "Lord's Prayer" and "Ave Maria"; some inspiration things, "You'll Never Walk Alone", which is Broadway; and a couple of arias that are so deeply ingrained in our consciousness we can sing along with them.

Tony: One of my favourite songs was "The Dream", and you wrote that yourself.

David: This project was probably about a year and a half in the making. The song selection part of it, we look our time - about a year. It was four years since my last studio project, so we really didn't want to miss-step on having any songs out of the scope of what we were trying to do. I wanted it to feel like it was almost established. When I started working on "The Dream", I took my lead from a 200 year old violin piece that's a standard lots of violin players know, "La FolÃ­a". It's a chord progression classical musicians use in lots of different pieces. I went from there and worked to try to create this piece that ebbed and flowed: you felt like you were moving toward the end and all of a sudden it backed up, takes the listener by surprise a bit. To my friends I call it my opus. It's been pretty amazing, every night I perform it, the response that comes.

Tony: Were the recording sessions done over a long period of time?

David: Once we got to recording it moved pretty quickly. I had already done arrangements for the songs, I had done some of the orchestrating on the songs as well. When we got moving ahead, going into the studio, I had laid out a lot of the direction. From that point on it was hiring the right musicians, getting the right sounds, the right studio; I brought in a couple of other orchestrators who I believed could lend themselves to this project very well. Once that ball started rolling, because there was a lot of pre-work done, it happened pretty quickly.

Tony: Have you ever strayed from the Christian path?

David: Have I ever. I was raised in a Christian home; I was also raised in a thinking home, and we were always discussing and debating things about our faith. Sometimes it didn't agree with what the pastor had preached on Sunday morning. I've grown to appreciate that as an adult. I've had to define my living faith from day-to-day. There are days that I go through the motions, and it seems like it's easy; there are days that it's not easy to live like I know that I should. I know that I have forgiveness for those things. I try to daily pick myself up and get back on the right path. 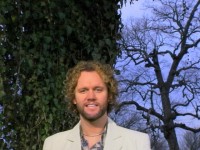 Tony: Would you call yourself a minister of the Gospel?

David: I'm definitely a lay person when it comes to being a minister, but we all, as believers, fall under that category: none of us are called to believe in secrecy, or to believe on Sunday and live like something else the rest of the week. We're all called to live out the message of Jesus on a daily basis - in front of our peers and those who need to hear it. In that sense, I am very much that. What I believe that I've been called to do is simply lift up the name of Jesus. That happens whether I'm at the grocery store, or at the bank, or on stage singing my music - even if it's not a Gospel lyric. I sing a real mixture of things from opera to Broadway pieces to full-out Gospel and sacred things, and I've always felt it's my calling to lift up the name of Jesus, but I try to give people hope, to inspire them on a journey through this life that can get hard.

Tony: Aren't a lot of Christians hung up with trying to classify music into two types, Christian and secular?

David: I grew up in that atmosphere, and it's not one that I felt comfortable with. As I began to expand in my art, it quickly became a shoe that fit too tightly. That was the metaphor I used as I began to talk about who I am as a believer, who I am as an artist, and who I am as a family man - a husband and a father. I don't think our world is like that at all; I don't think any of us do that very well even if we tried. Art should reflect that we all have times when we feel lost. Shouldn't art be reflective of that lonely feeling of not having an answer to a problem? We are people of faith, and in the end we can find hope through that. Also, we have relationships that we feel deeply for and passionate for the ones we love. Songs about that are part of the human experience as well. I'm so glad you asked, because that has been a really big theme on my journey through who I am as an artist. I talked to an older fellow once about this - it was when I was making my project 'Life Is A Church' - and he said, "The older I get, the more the line is blurred between my secular and spiritual experiences". I thought, Boy, that is really the truth. If you have your eyes open, you'll see that many of the spiritual experiences that we are a part of can seem very secular, and vice versa: many of the secular experiences can bring a spiritual truth.

Tony: Someone said to me you'd be great in Les MisÃ©rables. Has musical theatre ever interested you?

I HAD NEVER HEARD OF DAVID PHELPS BEFORE EASTER OF 2016. I WAS HOUSE BOUND AND DEPRESSED. THE LORD LED ME TO MY COMPUTER TO LISTEN TO BEAUTIFUL CHRISTIAN SONGS AND I DISCOVERED DAVID PHELPS. YOUR SONG, "END OF THE BEGINNING" HOOKED ME ON YOU. I LISTENED TO EVERYTHING I COULD FIND. YOUR MAGNIFICENT VOICE LIFTED MY SPIRITS. YOU PUT YOUR HEART AND SOUL INTO YOUR SINGING. YOU HAVE BLESSED ME MORE THAN YOU WILL EVER KNOW. MAY THE LORD CONTINUE TO BLESS YOU.

David Phelps is a true gift from God. His version of It is Well is as moving a song as I have heard. I hope he has a DVD of him singing the GREAT Christian Hymns we learned as Children & found in our hymnals .

This was a great interview! I'm a long-time David Phelps' fan; and whether he is singing Southern Gospel, Contemporary, or Classic, his voice is THE absolute best!

David is my most favourite artist and I so excited to know that I will get to hear him sing twice this year. He is extraordinary! My life has never been the same since I first heard him sing and is a source of comfort and joy in my life.
Love you David

YOUR LATEST VIDEO AND CD ARE WONDERFUL AND SUCH A BLESSING TO HEAR. WE ARE IN OUR EIGHTIES
SHIRLEY LIPPINCOTT