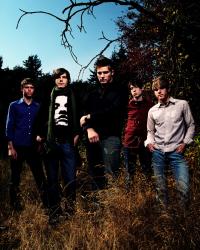 Dead Poetic are on a mission. The hard rock outfit from New Lebanon, Ohio have been relentlessly promoting their music since signing to Tooth & Nail back in 2001, and remarkably for a relatively unknown Christian band, have ventured across the pond to complete a 14-date tour of the UK, including such prestigious rock haunts as the London Underground, Leicester's Charlotte and Nottingham's Rock City. Originally a four-piece, Dead Poetic have strengthened their line-up since 2002 debut '4our Wall Blackmail' with second guitarist Todd Osborne. He joins vocalist Brandon Rike, guitarist Zach Miles and brothers Chad and Josh Shellabarger on bass and drums respectively. Their sound encompasses both rock and pop, both hardcore and emo - one might compare them to Finch or Poison The Well - their crunching riffs and screaming vocals finely balanced with sweetly melodic breaks and tone-perfect pop harmonies. Their two albums on Solid State have cemented their reputation in the States as Ones To Watch, and their constant touring has earned them a legion of fans.

But of course Dead Poetic are not simply about catchy songs, as frontman Brandon Rike explained to Justin Style, backstage at their recent gig at the Bristol Fleece. Rike was refreshingly frank about the problems of maintaining a ministering attitude whilst being in a rock band. "All I can do is be myself in my songwriting. To outwardly confess that I'm sinning day after day. The thing about a band is that you start off with the purest of intentions, but then you get to a point where you sacrifice everything for this band, and when you mix ministry with career, a lot of things can get in the way. But for me the ministry has never stopped, the desire to show people God has never stopped."

Despite such difficulties, Dead Poetic's second release, 'New Medicines', manages to capitalise on their early success (avoiding what its known in the trade as "Difficult Second Album Syndrome") and sees the band, still mostly in their early 20s, more mature, more musically confident. Enlisting the production talents of producer Aaron Sprinkle (Kutless, Jeremy Camp), Dead Poetic find a more polished sound; the guitar work is tighter, the vocals are more assured, and crucially, the lyrics hint at a broader world-view. Rike commented, "This record completely blows the other record away, in our opinion. This record shows a confident band that has found their niche. The progression is obviously that the band have matured, and so we had a lot more influence on this record compared to the first. ['4our Wall Blackmail'] was more us trying to put something together, whereas the new album is more us and our music coming out." Zach Miles added, "'New Medicines' is the kind of album we wanted to create for our first album, but we weren't there musically." The secret track, a tender little guitar ditty stashed away at the end of "A Hoax To Die For" is emblematic of how far the band have come.

Their origins are similar to many teenage bands; back in 1997 three small-town high school friends "basically obsessed" with Green Day and Nirvana wanted to start a pop-punk band. The fourth, Chad's brother Josh, was invited to join when the others realised that he was both the only drummer they knew, (and, rather crucially, the only one who could drive them to practice sessions.) And so, Dead Poetic - so named because "it just sounds cool" - was born that day. Incessant touring around Ohio's churches gradually brought them a little acclaim and led to an appearance at the Cornerstone Festival in 2000 where the band's confident self-promotion brought them to the attention of America's leading exponent of Christian rock, Tooth & Nail. Even since coming into such celebrated company, Dead Poetic have remained modest. Rike noted, "I don't consider myself a natural singer. I think sometimes my ideas can be a little bit beyond my skill, but I think that pushes me to be a better singer."

While being on the road has brought them and their music to a greater audience, Dead Poetic still find elements of touring hard to bear. The constant instability, said Rike, makes life as a Christian very difficult. "Number one, there's no way you can go to church. The routine of daily life that would enable you to stay in the word and follow your own daily devotions, that's pretty much gone. And then there's definitely the rock and roll lifestyle that tends to be the demon that pulls down on all the standards you've built up for yourself. But everyone's trying their hardest, and I've been trying my hardest, but I fail all the time." Still, true to form, the hard-working rockers are currently in the middle of a mammoth tour with Anadivine and Acceptance, taking 'New Medicines' all across the States.