Delirious?: Back with the long awaited new album 'Mezzamorphis'

Seemingly the whole Christian music world has been anxiously awaiting the protracted birth of the new DELIRIOUS? album 'Mezzamorphis'. Mike Rimmer has watched its slow but sure emergence. 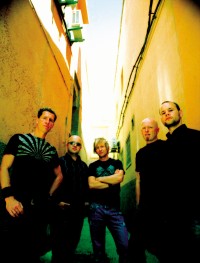 It's a rainy, windy April afternoon in 1998 as I make my way to New England College on the outskirts of Littlehampton. In this empty run down former education establishment, Delirious? have set up a studio home. This will be the place where the bulk of the next Delirious? album will be fashioned.

The band are spread out into different rooms in the building. I'm given a guided tour and taken to a huge hall with oak panelling which has been utilised in order to give Stew Smith's drums a vast sound. Nearby in a tiny broom cupboard of a room, keyboard player Tim Jupp is slaving over a digital editing machine, the technology of which he admits he has only recently mastered. He is doing something terribly complicated with Smith's drumming, editing and creating loops, a man with his machine!

Doesn't he get lonely? He chuckles, "I would if it wasn't for days like today when you turned up, Mike, and shared a little story with us and a little meal at the Beefeater." He reflects, "Recording is a long process and we've found that out this time. We wanted to move things on a lot and that's not been a question of spending another week or two but spending another month or two really to get things to the next level."

In another part of the college, the band have converted one room into a recording studio. A huge mixing desk is the main feature; equipment spills out across the room. I sit on a sofa and notice the now famous standard lamp from the D:Tour "living room" is in this makeshift studio. Stu G stands with his back to me facing the room's huge French windows that reveal the dreary day outside. His body taut with concentration, he records the incredible solo guitar parts to the moody "Blindfold". It's a memorable moment and soon the band's manager Tony Patoto

"Blindfold" continues the theme of "Summer Of Love" describing the feelings of the band after Stew Smith's wife sadly had a miscarriage. Martin describes it as "quite a tense track" and adds, "Thankfully they've had a little girl since but it felt such a dark time, it affected all of us so much. It was just one of those times where it felt there was no light in the sky and we were all kind of scrabbling around for answers. The song really reflects the darkness and the tension and I remember talking to her and getting the feeling that there was just no tomorrow. It was like, take this blindfold off me, I'm walking but I cannot see. There's no sort of happy ending to the song apart from at the end it goes into this big sort of glory thing and it's not meant to be a triumphalistic thing, rather that sometimes that's all we can sing. All we know to do is to keep on praising. It is a big moment on the album."

Before Martin heads home to baby-sit his one-year-old daughter, I ask him about preparing the songs with Stu Garrard. He explains, "We spend a week or two just on our own together with acoustics, just bashing out the songs and getting the arrangements and middle eights. Then we demo them and everyone has a cassette so they can think about it. Then we come in and sort of bash it around and change it a bit and then it becomes the band's sound at that stage."

In April 1998, Martin wouldn't be persuaded to reveal the album's title saying he preferred to keep a little mystery. However he does reveal, "The theme to the album is a lot of the songs are talking about Heaven and the whole idea that yes, we can experience lots of different things here. Joy and pain especially as a Christian but it's all pointing towards one day we're gonna meet Jesus and that's what I'm trying to point people to in the songs a little bit."

Your average rock 'n' roll band will normally record from the evening until early morning but Delirious? have chosen a civilised schedule. The band have always put family first so it's no surprise when Tim explains, " Most of the work we do these days involves being away quite a lot and recording is one of the things that we don't necessarily have to be away for. So we've found this place near home which is great and we get in about quarter to nine in the morning and knock off at six and go home like good boys for our tea."

Tim and Stu G aren't going home for their teas tonight because later in a Littlehampton restaurant, they take Pippa and me out for dinner and the conversation continues. One of the things that is most impressive about Delirious? is the way in which the guys seem to be constantly discussing and dreaming like the family they are. Tim agrees, "I think one of the reasons why the band and the core of it is really strong is because we just have to continually talk about things. You can't let anything fester about the issues that arise and when we go away all the girls sort of look after each other." His thoughts are interrupted by the arrival of food. Tim adopts the role of cheery host and smiles, "Tuck in everyone."

Nearly a year later and the album is in the can, the first single is about to be released and Delirious? are on the road. Ahead of the 'Mezzamorphis' all singing, all dancing, full scale tour, the band are heading out with a stripped down rock'n'roll show. Just set up and play like they used to. No sofas, no videos, no fruit bowl, no Elvis the alien but instead a chance to hear some new tunes and get excited about the next part of the journey. Parked outside the Royal Court Theatre in Liverpool, on a cold Saturday night in February, the gear that filled two articulated lorries on the D: tour has slimmed down to a single artic. Inside the venue I am met by a smiling, similarly slimmed down Tim Jupp, clearly proud that he's shed more than three stones and looking good!

We decamp to the band's dressing room and chat idly of the things that have happened over the previous few months including the band's five-day trip to play the Parachute Festival to a crowd of 15,000 in New Zealand. The band actually spent four days on a plane and one day in NZ! However the event had some good and bad experiences for Tim! "They gave us a proper Maori greeting with the shouting, dancing and tongue waggling." The gig itself went well and the band found themselves with two hours to spare before they had to board a plane for the long trip home. So what's a band to do? Hit the beach. Two hours of frolicking, swimming and fun ensued but there were consequences. Tim remembers, "It was only later on the plane that we all started burning up. Because of the lack of the ozone layer in the southern hemisphere, the burn time in New Zealand is eight minutes and we'd been in the sun for two hours!" Consequently, it was a well toasted set of musicians who landed in London!"

Martin Smith arrives and since this dressing room happens to have an en suite bathroom, decides he'll take a bath. He and Tim joke that I ought to interview him in the bath. I politely decline! In the course of the conversation with Tim, the Delirious? sense of humour surfaces again when Martin shouts from his tub, "Have you told him that we've sold out?" He's joking but there is a strong possibility that there might be some people who on hearing 'Mezzamorphis' will consider the band to have compromised.

Before Martin emerges from his ablutions, guitarist Stu G, resplendent with his new look black goatee beard, counters the idea of sell out. "I don't know if anything has actually changed. I think that the veneer might have changed a bit. There was a difference between the 'Cutting Edge' albums and then 'King Of Fools' which was basically the difference of actually being full time and being able to play music more and working at your songwriting. I think that's taken even a further step with this next album and at the crux of this we're still writing songs from the heart, which is a worship attitude and observation on life and all that kind of thing. It's totally from a God perspective but I think our ambitions and visions are slightly more focused and in wanting to take it out into the general market place."

Taking their music into the mainstream has been part of the Delirious? gameplan for a while. The release of the three singles from 'King Of Fools' was a beginning and taking it further seems to be a case of the band practising what they're preaching. Stu explains, "I think we've been encouraging a whole generation of young people to open up the doors and let the music play whether that music is actually music or whether it's their job of work that they do or wherever they find themselves. We believe strongly that we should be having an effect on people around us and that what we do is done with integrity and it would be hypocritical of us to not do that ourselves if we're trying to tell other people to do it." The release of 'Mezzamorphis' is a fresh step and listening to the album, the band have clearly taken a significant musical step forward. Stu says, "In terms of the actual songs, we want to communicate the truth and the hope we have in a way that is not confrontational or necessarily obvious. I think if you look at the lyrics, there are some very explicit lyrics on this album. We've taken our inspiration from people like CS Lewis who wrote about the Kingdom and about God and about the Gospel in a very understandable way, that even children can understand but it's not apparent to the first look sometimes."