The single "Deeper" is in the charts, they'll soon be playing Wembley Stadium, and rumours of revival are in the air... Mike Rimmer meets DELIRIOUS?. 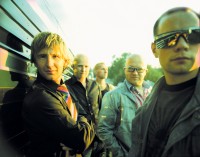 Only exiles on the planet Venus could have failed to notice this year's growing excitement about Delirious?. If, as Paul Simon once sang, "Every generation throws a hero up the pop charts," it could be argued that the same could be said of British CCM's attempts at mainstream success. In the late '70s it was After The Fire, late '80s it was Heartbeat. Late '90s and we're seeing Delirious? create a big, big stir!

Their debut single surprised plenty. The band themselves are excited by the response so far. Keyboard player Tim Jupp reflects on the success of "White Ribbon Day", "We were delighted really. We were quite overwhelmed by the support of so many people who were really behind what we're doing. That's one of the things that excited us." Drummer Stewart Smith continues the theme, "People are just so behind somebody trying to stand up for something they believe in. Everything we do is not just about us playing, but about the fans. They seem to have caught hold of something that we're running for and they're willing to stand up and say that they're proud of Jesus and that's an incredible thing."

The band have an enthusiastic following. Their mailing list currently stands at 12,000 people. The success of "White Ribbon Day" has attracted media attention to the band's faith, as Tim comments, "It would be difficult for it not to! Lyrically, that single was quite in your face and talked about what we believe in." The band already have opportunity to talk about their faith. Stewart explains, "For me, the opportunities to do interviews with people who don't know God has been an incredible privilege. Just to be able to relay something you believe in a way that people can respond to, either positively or negatively, is great. We've found a lot of positive reaction. People are bowled over by the fact we're willing to stand up for what we believe in"

Martin Smith expands this idea. "The industry are amazed that there are so many people who know about the band and what we're doing, and yet the industry itself has never heard of us. It's like the exciting underground thing that you read about, with record companies always the last to know. The fans are proud of the fact that they own it still - it's not gone massive. They're the first to know. We appreciate them and make sure we communicate with them. They're passionate about what the songs are saying. But it's more than a fan base - they're living the whole thing. It's a way of life, not just about the band but the whole message about Jesus. This is a season for making history."
The positive response to the band has expressed itself in the huge numbers of fans seeing the band live. It's the end of April; The Junction in Cambridge is quickly filling with people. Delirious? albums are selling at a rate which would make a hot cake feel tardy. As usual these days, tickets sold out in advance of the gig. The place is buzzing with a sense of excitement.

Local band Chimera take a sprightly trip through their support slot mixing their own material with a couple of Iona covers. Big sound, excellent vocalist, promising future. They manage to provoke a spirited response from some of the crowd and the men from Delirious? even stroll quietly out from back-stage to check them out.

Nine o'clock is showtime and the band hit the stage full on with "Come Like You Promise" and we're off on a 90-minute rollercoaster ride of rock'n'worship. Mixing new material with crowd-pleasing favourites, the live Delirious? experience contains the sort of inspirational moments that fill you with a sense of being part of something bigger than the success of a rock band. One second it's possible to leap about to the solid wall of sound, and then before you know it, the band takes you into the very presence of God with a gentle worship tune. Exhilarating and moving and perhaps the reason why the band have caught the imagination.

The next morning, it's a bleary eyed Delirious? that invite me for breakfast. Conversation is relaxed and it's clear that the band enjoy each other's company. There is much teasing and the bleeping of mobile phones. This is a busy band and they're taking care of business. Tim Jupp gives me a copy of the band's video for "Deeper". It's just been finished. He plays it for me and there is much ribbing between band members about their on-screen antics. I tease Martin Smith for wearing a Meat Loaf-style frilly shirt! The video is fun and visually entertaining and I have dreams that "Deeper" could be the song of the summer in the way Dodgy's "Good Enough" was ever present last year. Basically, the rooftop shot video is an excellent promo for the song. They are clearly pleased with the result. Tim comments, "It was a new departure for us and we had a lot of fun doing it."

The band maintains a strong sense of humour and there is much ribbing of yours truly! At one time Martin Smith tries to persuade me that the band considered dressing up in women's clothes for the video! Tongue in cheek I suggest it would be an interesting but unedifying experience to see Martin in a skirt! He parries my comments by saying that he "tried a few on", rang his wife and she wasn't into the idea! Another idea which didn't even get onto the drawing board was modelling each member of the band on a Spice Girl. I suggest to Stuart Garrard (whose famous wisp' of beard took 14 months to grow, fact fans!) that he could be Goatee Spice! Clearly it's good fun being in Delirious?.

The band has high expectations for "Deeper". Tim put things in perspective, "With 'White Ribbon Day' going in at 41 without any particular media attention or radio play, it certainly made an impression on the industry and all reports so far are giving us the idea that people are sitting up and listening. Also, the fans have been very excited because they've seen the potential of what can happen, so we feel they're very much behind us."

Stuart Garrard chips in, "We feel the Top 40 is an area we want to invade and have an influence in. We felt 'Deeper' was an obvious follow up - it's a bit more up, it's radio friendly." Listening to the song, the lyrics of "Deeper" are less obviously Christian than the previous single. Is this a deliberate strategy to appeal to a wider audience? Stuart responds, "It's not having an effect on the way we write the songs. If you look into the song, it's very much a 'I want to go further with you God' song. We don't think we have to mention Jesus every other line."

Martin Smith continues these thoughts, "We can make a mistake of trying to present the whole picture of God, the universe and a theological argument into every song. But really it's more about our lives. That's not a cop out at all because at the end of the day, you've got to present some sort of truth in your lyrics. I think what the media are picking up on is that there is something real behind this - not necessarily the fact that it's Christian music, but that there's something different about these guys, their relationships and the way they do business. The whole think is a statement. We don't have a problem about sticking some of our songs out that aren't so in your face because the whole wagon is talking about God."

Overnight I've been thinking about the CCM/worship divide and where the band fit in. When I suggest to Stewart Smith that Delirious? are a hybrid and invite his response, he says, "That's for you to say! I think we are who we are and wouldn't want to put ourselves in any particular box. Whatever people want to make of it, that's fine."

When I protest that this is perhaps a bit of a cop out answer, Stewart continues, "I thought it was a very good answer! I think when people come to gigs some come expecting a full on worship thing. Others bring their mates and expect a rock gig. Everything used to be so clear cut and precise that you knew exactly what was going to happen. With us, either consciously or totally by accident, things have become blurred." I suggest that this could be confusing for people. Stewart pauses for a long time and then says, "Possibly." At this stage, the rest of the band who are witnessing the interview collapse in laughter.

'King Of Fools' has excellent potential to work as a mainstream calling card for Delirious?. They started recording on December 1st 1996 and finally finished in the middle of April. The recordings were punctuated by the band's very active live schedule. Martin Smith sees this as a good thing, "It kept it exciting," he explains, "going off for weekends doing some gigs, then coming back in and recording and bringing the ideas back that we tried live. Most bands go into a studio to record the album but this time we took a mobile kit into a house in London and camped out there. It was freezing! We used the big old fashioned rooms and got some great drum sounds, recorded the whole thing and then mixed somewhere else."