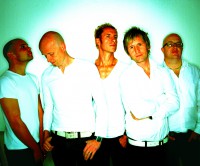 For weeks before the last ever gig by Delirious?, the much talked about item was the announcement that the Cutting Edge Band was going to be their support act. That in itself was enough to get people's curiosity going. After all, who ever heard of a band supporting itself? The choice of the Cutting Edge Band as support was a divinely inspired bit of irony; a real "only in Britain" moment. Dressed in the old outfits they used to wear when they were the Cutting Edge Band (and including one hairpiece - it was a long time ago, remember), they sang oldies such as "I Could Sing Of Your Love Forever" and "The Happy Song".

Sadly, I missed the Cutting Edge Band's support slot - but was very reliably (and repeatedly) informed that it was great fun. I was there for all of the main event, though, and in my many years of going to Delirious? gigs, this was definitely the best one of theirs I've ever seen. I could wax lyrical forever about how great this stunning performance was and what the special bits were. Instead, I'm going to give you a "skip to this bit" list for when the DVD of the historic concert is released. These are the crucial scenes to look out for:

In between songs (usually when the band were off changing costumes again), we were given video glimpses of various highlights of their career, as well as video messages of thanks from each band member. "This is not an end," Martin Smith reassured us in one. "It's a beautiful beginning."

The choice of Monty Python's "Always Look On The Bright Side Of Life" as our tune to exit the venue to was as inspired as the gig itself. This was the first time I've been at a concert at which everybody sang - and whistled - as they departed.

I wasn't at the Apollo but I was at Leeds and reading this article brings back emotions I didn't know I had ! Delirious SIMPLY ARE GOD'S APOSTLES Awesome !