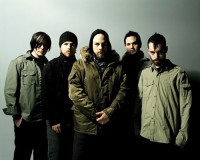 Since Cross Rhythms last reported on Demon Hunter in 2006, this Seattle-based aggregation of heavy metallers have continued their hectic touring schedule and powerfully abrasive albums to remain one of Christendom's top draws. Their Solid State albums 'Storm The Gates Of Hell' (2007) and 'The World Is A Thorn' (2010) both made the Billboard 200 mainstream album charts and their latest 'True Defiance' - released in the UK through Kingsway - has been their biggest chart hit so far, making number 36 in the US charts. The band celebrated their 10th anniversary this year. MetalUnderground.com asked the band's sole remaining founder member Ryan Clark how Demon Hunter have changed down the years.

"As far as changes, there's been lineup changes throughout the last 10 years here and there. The biggest one being my brother leaving the band a couple of years ago, but he's been out of the band for the last two records. That was the biggest change we had to endure because he and I were kind of the songwriters together for the first four records. As far as other changes, we've gone through some stylistic changes. I feel like everyone in the band, whether they are new members or have been with us for awhile, there's been kind of an increase in the talent level and the skill level altogether, which has helped us progress to something a little more technical than what we were when we started. We kind of have more range. The basic framework is still there, I like to call it the 'DH blueprint', it's something you can hear from record one to now, but we've made changes and tried to make it interesting and unique for every record."

With many metal band pulling back on the musical aggression as the years roll on, Demon Hunter remain defiantly brutal in their musical approach. Speaking about 'True Defiance' Clark asserted, "This record is without a doubt our most aggressive. Every Demon Hunter record must be a step up from the last. I know that's a goal for every band, but it seldom works that way - especially today, especially in metal. It seems like most bands' prime years are long behind them. I refuse to let that be the case for us. We've been extremely underwhelmed with metal for the last five years or so, and that's been the fuel to create this record. With an extreme over-saturation of false, fleeting, trend-hopping noise in today's metal scene, we had to make something we've been longing to hear. Something truly meaningful and artistic. Something our fans would love and something that will turn the heads of those who have ignored us for the past decade."

As the years have gone on Demon Hunter have become increasingly assertive about the band's Christian faith. Ryan told JesusFreakHideout about the message behind 'True Defiance'. "I would say the overarching concept is an unapologetic look at Christian faith in the modern age. In an age that consistently grows further and further away from the core ideals and beliefs of the Christian worldview, this album is about being steadfast in those beliefs, despite adversity or popular leanings. That's really where the album title comes from."

Clark was asked whether the addition of Jeremiah Scott on rhythm guitar to Demon Hunter's ranks had influenced the songwriting process. He replied, "The songwriting has always been the same. I write the songs, and when we get together to record, we make subtle revisions/additions/etc in order to fine tune them. I want everyone in the band to feel fulfilled in their respective roles, but the songwriting role has been mine since the band's inception (for the first four records, it was both my brother Don and I). The only blatant exceptions are the guitar solos, which are all written and performed by Patrick."

Aaron Sprinkle has produced all the Demon Hunter albums so far. Has the studio whiz been a key figure in developing Demon Hunter's sound? "I always call Aaron the sixth band member in regard to the recording process. His input has really helped shape the Demon Hunter sound over the years. All of those little details you hear in the songs - the cool little keyboard parts, programming, anything like that - are all his doing. Additionally, he's a priceless asset when it comes to vocals. He really brings the most out of the melodies and harmonies. He's helped me completely re-write melodies, or bring parts to life with harmonies I would never have considered. He understands the band like no other producer could."

Ryan was asked what role he saw Demon Hunter playing in the music industry as a veteran band. "I hope that we're seen as the guys that are still writing great music and standing true to our beliefs. Like I said, there's a lot of modern heavy music that I can't really relate to, so I'm hoping our music really reaches people that feel a connection with what we do."