Demon Hunter: The Molten Blastbeats Of 'The Triptych'

Elizabeth Cook reports on the heavy metal band Demon Hunter and their rise in mainstream popularity.

They've got a name which is almost a throwback to those confront-the-Devil Christian thrash metal bands of the early '90s. Yet Seattle's Demon Hunter have been getting rave reviews in mainstream mags like Kerrang! and Rock Sound and their stunning latest album 'The Triptych' with its groove-led blastbeats and molten melodic underbelly is being bought by plenty of headbangers who've no idea that their new musical heroes are believers. The band's current line up has quite a pedigree: Ryan Clark (vocals) was formerly guitarist for Focal Point and vocalist for Training For Utopia; Jon Dunn (bass) is A&R, manager of licensing and publishing at Tooth & Nail Records; Don Clark (guitar) was formerly guitarist for Training For Utopia; Ethan Luck (guitar) was formerly guitarist for The OC Supertones and drummer for The Dingees; and drummer Timothy "Yogi" Watts also plays in The Lonely Hearts, who were previously known as Holland.

Ryan, whose day job is overseeing the design company Asterik Studio and being involved in label and artist development at Tooth & Nail, heads a band unafraid to do things that might bemuse detractors and fans alike. This has led to the adventurous music present on 'The Triptych' and the visually arresting artwork that accompanies it. While doing A&R for Becoming The Archetype, a band Ryan signed to Solid State, he came across the work of a British artist called Dan Seagrave, who has a history of working in metal creating often disturbing pieces for the likes of Morbid Angel, Pestilence and Suffocation. After hiring Dan for Archetype's debut album art and seeing the work produced for his protÃ©gÃ©es, Clark gave Seagrave the job of creating the visual triptych to which his own band's album title refers.

Clark told Rock Sound, "I emailed Dan, we started talking about things, and he understood that this band was not a dark project like he was used to. He was totally cool about it. He did not refuse to work on it because it was not evil enough or anything. He got what we were about and just worked with it. We wanted the album visual to be fine art, something illustrated rather than merely designed, and we were amazed with the results." The concept of a triptych is a work of art that is divided into three sections that are interlinked or interdependent on each other. Renaissance painters loved them and they are mainly found as gothic altarpieces in churches in Europe. With their latest offering, Demon Hunter have engaged complex tricks with the visual form as a metaphor for the band.

The potential controversy of a Christian band using an artist known for his demonic influences and work with seriously off-base bands was not lost even on avowedly secular Rock Sound magazine. With commendable discernment they wrote, "The band are blurring the lines between the worlds of the sacred and profane, something they feel is very important not only artistically but lyrically. That is, to create something that speaks of the faith this band have, but does not do so at such a volume that people are intimidated, disgusted or disqualified by that said belief system. "It has been trial and error," admits Ryan. "With Demon Hunter, by the time we started this band, we had it figured out how we wanted to do this. I think we are outspoken enough that if anyone reads a little or listens to the lyrics there is no denying our faith or anything like that, but there is no Bible-bashing going on so that non-Christians find us overbearing. We have got to a medium point and we know what works; we've been in bands that have been really hush-hush about their beliefs and we have seen bands get no acceptance as they have pushed too hard. We wanted to make sure we did not scare people away with our beliefs, but have a platform to say what we believed in and be outspoken." 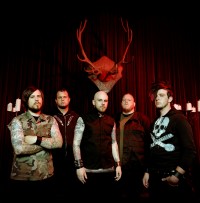 When they began, the group chose to keep their names anonymous, but later revealed them when they started their first tour. Demon Hunter's self-titled first album was released in 2002 on Tooth & Nail's hard music subsidiary Solid State. Demon Hunter returned to the studio to record their second full length release, 'Summer Of Darkness', in 2004 which was a huge success, propelling Demon Hunter into the secular market. Their single "My Heartstrings Come Undone" from 'Summer Of Darkness' was selected for the Resident Evil: Apocalypse movie soundtrack.

Demon Hunter's first two albums had a lot of extra electrics and guest singers, whereas 'Triptych' has been stripped down a little and made into a straight up metal album. Ryan explained, "We like experimenting a little bit and exploring different areas but we definitely had it in our agenda to make this one just more straight forward and more metal." The album also contains a re-recorded version of "Snap Your Fingers, Snap You Neck", originally a Prong's song released on their 1993 record 'Cleansing'. Ryan said, "It was totally a favourite record of ours growing up and we got into them right when that record came out. We felt that it would be cool to re-introduce them to a lot of new metal fans and re-do it so that some people who might never have heard of them could hear it and also to kind of pay homage to them for being an inspiration."

Ryan talked a little more about the new album, explaining, "We're aiming more at the legitimately metal end of things. We're always going to have melody and we're always going to do the slower songs and things like that because it's something that we love, but I think that there are small things that draw us apart from what can be really cheesy about new metal and the bands that are within that genre. I think that we have enough diversity and we tackle enough in every kind of genre of metal that we're not too specifically in new metal, so I think that'll help draw a line between just an average new metal band and us."

The band have previously toured with Dead Poetic, Extol and Agony Seeds across the US. They would love to tour Europe. Ryan said, "We've talked about it so much, we're so into the idea that I would assume we will. I don't know how soon but it's all very appealing to us. I wouldn't doubt that we'll be there in the near future." 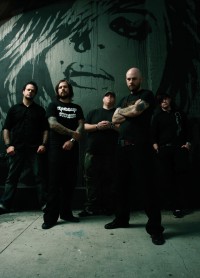 Strangely enough, metal and Christianity has been one of the most popular collaborations in recent years, yet for more conservative elements in the Church it is a difficult concept. Despite this, Demon Hunter's popularity continues to grow. Even Ryan himself is surprised by the phenomenon. He told Rock Sound, "We were there when it was definitely not as accepted to be Christians playing metal, we felt the wrath for sure. Things have certainly changed, but I think for the most part it is people coming round to the music rather than music changing for people's acceptance." Armed with metal that crosses scenes, styles and spiritual and secular boundaries, Demon Hunter are in a strong position to assert their authority on the heavy music landscape.

I think deamon hunter is an awsome band!

Demon hunter is giving me the power to confront the things that have been eating my curiosity alive(vampires ect.) Whatever Im not afraid anymore cause I know God can be put into anything and still come out victorious. Thank you for giving me that courage.

demon hunter is my favourite band and they do not even compromise their message.respect man.they rock.

Demon Hunter changed the way i listen to Christian
music, i have always been a fan of hard rock and metal and til i heard Demon Hunter, i couldn't find a "good enough" substitute for some of the more known but very wrong bands out there.

I believe that music is soul food, and where some people need soft gentle song, i need the powerfull passion of the guys from Demon Hunter. I really feel God in their word and it calms me down.

i totally agree with you! deamon hunter freakin rules!

yeah i know they freakin' rule. they are my favorite band. i listen to hard core, and ive never heard a christian metal band till' now. i love it.

i love the fact that they're christian. demon hunter si soooooooo freakin awsome and people who say that metal and christian can't mix are stupid.

some people think christian&metal mixed together is wierd i have people at my church& they say "noway metal and christian can mix" they think metal is just about screaming for no reason,or vometing in the mic but its more than that it has a good messege behind it im glad there is bands like demon hunter that play my favorite music demon hunter is my favorite band ever :-D

I think metal is one of the most Christian styles around - think about it, its a genre thats certainly NOT lukewarm, its incredibly passionate, has enough action to really carry epic themes etc... I mean, sure God appreciates all music but I really think metal helps express the more fired up side of Christian life, the determination to break sin and the anger at worldly values that still manage to corrupt you... im glad people are coming round to it alot more now :-D

dude like metal rocks the house, but you can get mad passionate about God using some old school smooth church tunes, its the heart that makes the song passionate not the style :) but yeah guy metal is AWESOME!!!! and Demon Hunter is kicking it true school.

I agree...And I've pictured Christian metal as the music of God's warriors. It's like fighting fire with fire - fighting the fire of hell with the fire of God!

view older comments
The opinions expressed in the Reader Comments are not necessarily those held by Cross Rhythms.