Drakeford: Folk-tinged acoustic pop with a touch of soul 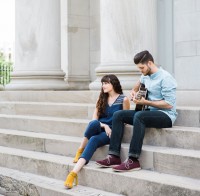 Drakeford's first full length album received accolades from all who heard it. Cross Rhythms wrote about the 'Anchors Aweigh' album, "Drakeford Lanier had previously used is first name for a singer/songwriter EP but now the addition of his British born wife Lucy Jayne has brought his Americana/folk-tinged music into full focus and the songs they write together deserve the widest possible audience," while SolidGroundReviews enthused, "This album is solid, not a meandering melody, not a line that does not point to which Drakeford has to say. The acoustic sounds, soul infused rhythms and lyrical excellence married to the ultimate relationship with Christ makes a wonderful album. . . If you like Jason Mraz, Ed Sheeran's acoustic side and a touch of soul and a sprinkle of jazz you'll love this album."

Thomas Drakeford Lanier ("I never went by Tom or Thomas") was born and raised in Florence, South Carolina. He recounted, "My parents split up when I was a kid, and I had two different houses to live in - the good, city-slicker Drake, who went to church with his mom and did well in school; then I'd go to my dad's house and I was rebellious, a redneck, wearing camouflage and going hunting. So I didn't grow up in church consistently. When I was in eighth grade, my neighbour was a youth pastor and invited me to his church. That changed everything: I was 13, and I understood the gospel for the first time. I felt a need to put an end to the half of my life that was reckless and lacking any sort of authority."

Drake continued, "The church I learned about Jesus first in was a very traditional Baptist, and it wasn't until I moved overseas to start serving in ministry that I came across this very relevant and current being called the Holy Spirit. Music started around the same time - 2006. What I did have, right off the bat, was this crazy, supernatural desire to learn anything I could about music, which came out of nowhere and went from zero to 60. Within that first year I learned guitar and piano, and started hacking out songs. That's turned into eleven years of singer-songwriter travelling around. After high school I moved overseas and started doing music ministry with this team in the Near East. It started out as a gap year, figuring out what I wanted to do. It was there that Lucy Jayne and I met for the first time. We were in Central Asia, touring Kyrgyzstan."

In January 2014 Drakeford released a solo EP 'The Shining Of The Sun' and he was singing songs from that. But when he met Lucy Jayne things began to change for the singer/songwriter. Said Lucy Jayne, "We had a really good connection and realised we enjoyed singing together. A lot of people would come up to us and say, 'Your voices blend beautifully.' It wasn't until we started dating and eventually got engaged that we thought, 'Maybe we should give this a go, and see if it's something God wants us to do together, to use the gifts he's given us to minister.'" 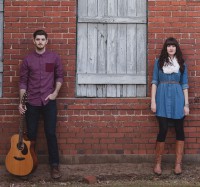 Lucy Jayne already was quite experienced in music ministry. Originally from the Midlands she'd moved with her family at the age of 10 before moving back to the UK when her training in dance and music led to her joining Manchester's Innervation Trust where she was a member of the four-girl teen pop group tbc whose album 'Talk Of The Town' (2007) won them a big following in Britain's schools. When tbc disbanded Lucy Jayne continued to work with Innervation for two years as a choreographer and back up dancer for schools musical evangelist BeBe Vox. Then in 2012 she left England to join an outreach team in Istanbul, Turkey. After meeting Drake the couple found they enjoyed making music together. Said Lucy Jayne, "We didn't initially commit to saying, 'Yes, we are a duo; we're going to do this.' It was just, 'Let's see where this goes.' After we got married in 2015 it became full-time: it kicked off and we started touring. We've been doing it ever since."

Lucy Jayne explained how the all-important debut album came into being. "It was amazing. Drake is an incredible songwriter. He's been writing since he was 13 and has gathered up a lot of songs. As we were in that experience of a different culture, living overseas, he wrote lots of songs; we started praying God would open up a door for us a record an album. Because albums are really expensive, we knew it would have to be from God. We moved back to the States, and through some amazing things that happened and some very generous friends, we were able to gather the amount of money we needed and recorded the album in various places around Tennessee and Georgia. We had lots of friends come and play instruments, and we had a good friend in Nashville mix and master the album, but on the whole it was us producing it. For about eight months we worked really hard on this album, and put our heart and soul into it. We feel really blessed to have had that opportunity. That album 'Anchors Aweigh' is a big reason we were able to start touring."

Drake chipped in, "The title track is a very important song that came to us when we were living overseas. It was a reminder that no matter how far we feel like we've come, we can always go back to the Scripture that says, 'God delights in calling us his own.' He's our anchor. What do we have to hold back for?"

Now Drakeford have begun working on their next album. This one is being recorded in Nashville with producer Riley Friesen (Group 1 Crew, Family Force 5). Drakeford's enthusiasm to share the Gospel through song is hugely infectious. Said Lucy Jayne, "It's amazing because it's trusting in God: we know that he has placed this calling on us, this passion for music, so we want to give it our all. We know he's going to provide. There are some months where it's like, 'God, how are we going to pay our rent?' He comes through every time. We know that as long as we remain in his will and what he wants us to do, he's going to provide what we need. Living overseas helped us get used to that lifestyle, because we were depending on him financially. God is a provider, and he's going to provide what we need."

For more on Drakeford visit the Drakeford artist profile