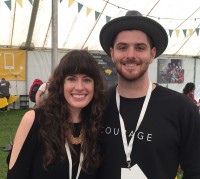 THE HUSBAND and wife duo from Chattanooga, Drakeford, who have built an international following through their constant touring and their appearances at the Big Church Day Out, have released their second full length album. 'The Venture' was produced by Riley Friesen at different studios in Nashville, Tennessee.

For more on Drakeford visit the Drakeford artist profile