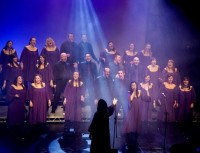 Although everyone knows that the rich harmonies and call-and-response dynamics of the gospel choir is an Afro American invention, for many a long year such music has been an international musical language. Gospel choirs from Scandinavia, Africa and even Japan have sprung up to connect with both church goers and non-church goers alike. Undoubtedly, one of the best aggregations is the Dublin Gospel Choir. They've sung before the Queen, back Rod Stewart and Stevie Wonder and in their 15 years of existence have been celebrated ambassadors for the sound of gospel. I caught up with the choir's musical director Orla Gargan to find out how the DGC came into being in Dublin's fair city.

Their origins go back to a graduation ceremony in a Dublin secondary school. They soon became the choir of St Mary Of The Angels, named after their local church. Orla, who has bee with the choir for 11 of those 15 years, admits that the film Sister Act was part of the inspiration. It wasn't long before they spread their wings to other venues but without losing touch with their faith background. In the early days they performed their Nights Of Soul at many churches in Dublin and also performed in small theatre venues around the capital and beyond.

"We essentially run a professional choir other than the fact that the singers give their time voluntarily for the most part," explained Orla. "There are around 35 members, but on any given night there might be around 20 singers in the choir." This allows the busy members to be flexible. That's particularly important around Christmas time. "We had 13 events in Christmas week this year!"

Some members have been with the choir from the beginning, but they like to bring in new members. Commented Orla, "It's hard to get men into the choir. At the moment there are roughly four females to every male." Not surprisingly for such a close community there have been romances and marriages in the choir, and of course the choir finds itself singing at the weddings.

I was impressed by the musical company they keep - in particular Orla remembers special occasions when the choir supported Rod Stewart, and when some of the members got to sing with Stevie Wonder in Dublin. Among the Irish performers they have supported are the Chieftains, Damien Rice, Paddy Casey and Chris de Burgh (on BBC's Songs Of Praise). A recent event included backing some Irish politicians for a charity single of "Bridge Over Troubled Water". Before Christmas this was outselling Simon & Garfunkel's version. Continued Orla, "We also performed for Queen Elizabeth during her visit to Ireland," and recommended a YouTube video: http://www.youtube.com/watch?v=8zcohxCWcAU. "This is a sample of the choir's work and what we are about with 'Liberty Bell' playing in the background."

I asked Orla about her own favourite events. "I love singing Christmas carols in the streets on Christmas week. It gives people a lift." She also has fond memories of the many times they have played the main stage at The Electric Picnic, one of Ireland's biggest summer music festivals. It's a Sunday morning wake up call at midday for the revellers! The New Year's Eve festival at Christ Church Cathedral is also an annual highlight.

The choir has professional management and is frequently booked for weddings, corporate and church events, Nights Of Soul, and even funerals, suggesting a diversity of approach that keeps the choir in good shape on an ongoing basis. The Nights Of Soul are aimed particularly at young people in the hope that the vibrant music will bring them closer to the Church. The choir brings a Capuchin preacher with them on the night, so it's not just about the music conveying a spiritual message.

DGC's song list for weddings is extensive, including gospel classics like "This Little Light Of Mine", modern gospel songs like Kirk Franklin's "Hosanna", songs from the Catholic tradition like "Ave Maria" and "The Cloud's Veil" and secular inspirational songs like "Over The Rainbow" and the Beatles' "All You Need Is Love". The choir's versatility is also shown in the inclusion of Irish language songs in their repertoire. A similar list, with appropriate additions, is provided for funerals and if people want songs that are not on the list, the choir are willing to learn them. 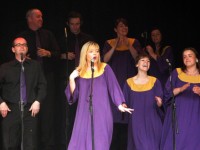 The choir has released two albums to date. 'Moving On' (2006) features gospel classics like "Oh Happy Day" and "Swing Low Sweet Chariot", and 'Doing Their Thing' (2009), featuring less familiar works like their own "Liberty Bell", a Dublin gospel song written by Ken McHugh and Carol Keogh, and "Faith", penned by one Naylor. What is particularly impressive are the new arrangements to "Here I Am Lord" and "Make Me A Channel". The funk/soul versions of the oldies undoubtedly connect with young people while there are plenty of more traditional gospel tracks. Vocals are consistently strong and the choir has some excellent solo singers. I was particularly taken with "Something So Wonderful" with Anna Carey on lead vocals. "Liberty Bell" has also been released as a single and its distinctly Irish flavour and references also make it stand out.

I asked Orla about her favourite composers and Kirk Franklin was high on her list. In fact a Franklin song, "My Love, My Life, My All", is one of the standout tracks on the recent album. Richard Smallwood and Kurt Carr also figure on Orla's top composers list. So what about the message such songs convey? "There's a huge faith aspect to the work," Orla responded. She pointed out how the choir sings so many uplifting songs, even just from a human point of view.

For the future, DGC is as busy as ever. One of the projects Orla is looking forward to is a collaboration with legendary Irish folk group The Dubliners. As I was writing up this interview I heard an appropriate verse in church: "I will sing forever of your love, O Lord" (Psalm 88). That is just what the Dublin Gospel Choir continues to do.

The opinions expressed in this article are not necessarily those held by Cross Rhythms. Any expressed views were accurate at the time of publishing but may or may not reflect the views of the individuals concerned at a later date.
About Brendan O'Regan
Brendan O'Regan lives in Co Wicklow and is a regular reviewer for Cross Rhythms.