ECHO: The covers band Extending Christ's Heart to Others

Use the phrase "covers band" to some music buffs and it will conjure up all kinds of stereotypes of second rate musicians performing third rate renditions of pop hits of yesteryear. But ECHO, the aggregation of musicians and singers from East London and Essex, are a covers band with a huge difference. Today an increasingly popular band at Christian festivals, but also a group who can play all manner of mainstream gigs, ECHO are clearly on the rise and are already planning the followup to their popular album debut 'Bought Not Souled'. Cross Rhythms spoke to the band's bass player and founder Greg Nash to get their story.

I began by asking him whether he minded ECHO being referred to as a covers band. "Not at all, we are a covers band and we do play covers gigs. But what we do is take old soul songs, usually classics from the '60s, and worship God while playing them. Sometimes that means we have to knock out a 'babe' and put in 'Lord' or something like that but almost all of the songs we hardly have to change and some we have not changed at all. It's just that we sing and play them with a different heart. We sing them to the Lord and it really lifts us and it lifts our audience. ECHO stands for Extending Christ's Heart to Others and that's what we're striving to do."

The origins of ECHO go back around five years. Explained Greg, "ECHO used to be a gospel choir; there used to be 10 singers and it was led by a man called Martin Tyson and Lisa, his wife. They were based in East Ham, Newham. Lisa and Martin left as they felt the Lord was leading them to do different things and Martin was the energy behind it and it did rather fall apart. At that time I was brought in as the number two bass player. They already had one but people had left for their own personal reasons and it lost a lot of momentum. It ended up with the deck, bass player and Clive the drummer who played with a function band doing Motown stuff and three girls and they were the only ones left of the original 10. It was the enthusiasm of these girls to carry on which was the driving force. It stated off with Marie da Silva who works with children and she does a lot of singing with them and puts together choirs. She had a handful of positive songs like 'I Can See Clearly Now' and 'Something Inside So Strong' and Clive and I know countless Motown songs which we had played many times at gigs. So we thought why don't we put together some of those positive songs, not choruses like the choir did. So we developed a set of about 45 minutes and we played our first gig in a cafÃ© which was in the foyer of a church. It packed the place out, it was not very big place anyway but they sold out the tickets about a week before we did the thing. Looking back on it, our first gig, it went down really well and we were encouraged and carried on. That was two and a half years ago and this year now we have got our hundredth booking and we have done 40 gigs already this year. We have come a long way."

Greg talked about the kind of concerts ECHO are now playing. "We love to do the church gigs but we found doing songs by people like Stevie Wonder and Aretha Franklin is fantastic for bridge-building 'cause everybody loves to hear the old classics. So we started getting used a lot for outreach and for parties. It goes down okay with non-Christians, even though we are singing to the Lord. We have to be careful what we say and how we witness in those secular situations but we love to witness and you can't stop those girls doing that anyway." 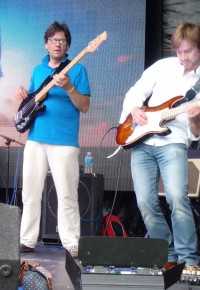 More conservative elements in the Church might consider it strange that a band running through the greatest hits of Jackie Wilson, The Four Tops, Labi Siffre and Martha & The Vandellas will bear spiritual fruit but clearly God has no problem with the concept. Greg remembered, "We did a gig at Eastertime, an outdoor thing in Brentwood High Street. We finished our set and two people came along and the girls started talking to them. I had my bass in my hand and was walking back to the car park and I could hear the girls saying, 'Do you want us to sing for you?' as this couple had come late and had missed our set. When I got back they were singing 'Your Love Is Lifting Me Higher' because they can do that unaccompanied. When they'd finished we led the couple to the Lord. I can tell you many stories like that."

"I used to be in a band called Medals who released two EPs through Plankton in 1990 and 1991. Paul our keyboard player and Clive our drummer were in Medals as well so we knew Keith Dixon, the main man at Plankton, from way back. Totally coincidentally, Paul had started to go to Keith's church and they know each other very well. Keith was very pleased that we had got ECHO going and was a going concern so he said, 'What about an album, boys?'"

'Bought Not Souled' was recorded in a rehearsal studio, Basildon Studios, which had a small recording studio upstairs. I did all the producer stuff and chose all the songs. The arrangements are pretty much band arrangements; Paul on the keyboard is fantastically musical and he arranges stuff like bars and such." Cross Rhythms called the album, which, as well as the Basildon-recorded tracks, contained four live recordings made at Highway Church, London E15, "a warm-hearted and thoroughly enjoyable exercise." 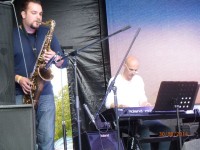 Said Greg, "We are now saving up to record the next album. The budget is five times more than the last one. One of the songs we'll be recording is a very ambitious one - Earth Wind & Fire's version of 'Got To Get You Into My Life'. It's very jazzy and there is some fast stuff in there. We are also going to do Sly & The Family Stone's 'Dance To The Music'; I like playing that Larry Graham bass part! There is another one I just can't wait to do. The vocals by the girls are just amazing. It's originally by Incognito, a song called 'Crave' which is very vocal. It was originally about girls craving their boyfriends and talking about it at night and all that kind of thing. We didn't have to change the words too much, it is just a beautiful love song and we sing it to the Lord."

So loved hearing you guys play at Bath Christian Festival.. real blessing to all.

I have just brought 2 cds after hearing the Best of my Love on Premier radio. It was wonderful to worship God and to sing along to such an amazing track. Please please let me know what gigs you are doing and where as I cant wait to see and hear you live. Every blessing for such a great work for the Lord Yvette

For more on ECHO visit the ECHO artist profile