East To West: The US duo producing classy pop

Neal Coomer and Jay DeMarcus, better known as EAST TO WEST, zipped onto America's CCM scene in 1994 and have so far delivered two infectious albums of classy pop. Tony Cummings reports on the duo's progress. 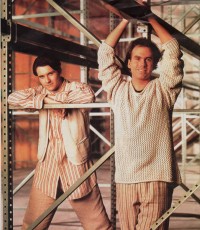 The catchy song "Welcome To The Next Level" got duo East To West away on American Christian radio and since then Neal Coomer and Jay DeMarcus have been steadily gaining popularity on the US scene. Although a recent Cross Rhythms reviewer suggested George Michael as a major stylistic influence, songwriter Jay DeMarcus insists it's the sounds of Nashville which have most shaped his songwriting. "I pattern a lot of my writing after country music. I really think that country lyrics get to the heart of the matter and they do it in a way that is so convincing that it just pulls on all kinds of heartstrings."

However it's achieved, East To West crank out great pop music with a timely and meaningful message. 1994's "Welcome To The Next Level" apparently became an anthem for many of America's church youth groups, while the duo's stage show combines high energy pop gems with heartfelt ballads, all the while keeping the audience as their main focus. Neal's voice emerges as sort of an "everyman's" voice, putting sounds to people's passion to be closer to God. While he may not be the "voice of a generation", he somehow imparts friendliness and warmth to all who listen.

With the second release, 'North Of The Sky', Neal and Jay show that they've grown up since their debut and they felt they were able to put more of their hearts into this project. Though easily described as two of the craziest guys this side of the Mississippi, Neal and Jay strongly convey a serious message - the hope that forgiveness in Christ will bring.

Family life hasn't always reflected The Brady Bunch mentality Neal and Jay remember from TV as both come from homes where their parents divorced. Jay's parents split when he was about 14 years old, getting ready to start his freshman year in high school. It was an especially difficult situation because his parents had been divorced once before and then reconciled. "I felt cheated in a big way. I really did. I always questioned why in the world could this happen twice. I always felt like I was missing out on something. There was a period of time when I blamed myself for a lot of the problems...which I later came to realise was not the case. But when you're young, you don't know any better," Jay says.

"My parents divorced when I was even younger than Jay," Neal continues. "It didn't really become hard for me until I started getting older and then I moved away from where my dad was, so then it became this thing where you have to split up your Christmases and that's where it kind of got difficult... In the back of your mind you wish for things to be perfect...but in a way it has a way of drawing you, in a different way, closer to your parents. My sister and I have become very close through all that. We really stuck together. She's just a really special person in my life."

Because they lived together, a deep relationship developed between Jay and his mother as well. "We have a very unusual bond between us. She is one of my best friends... I can talk to her about anything."

It's a different story for him and his father. Jay continues, "My father and I - it's a little more complicated. But the thing that has been the common bond between us is music. My father is very musical. It's almost like, even when we couldn't talk or communicate, we could speak through music, as strange as that may sound. I'm sort of living out his dreams, or he lives his dreams out through me. That gives me a good feeling."

Though divorce complicated their immediate family ties, Neal and Jay found rest in strong relationships with their grandparents. But the deaths of Neal's grandmother and Jay's grandfather have also forced both men to deal with the loss of those close ties. At the funeral for his grandmother, Neal's pastor said something that shot right through him. The pastor commented, "The thing that I wonder now, is after seeing these saints of God, they've grown up their whole lives and they kept the faith and they've been consistent and they've carried God's word with them everywhere they go in their witness and testimony...where is the generation that will follow after them and do the same? Are they a dying race?" For Neal, these ideas brought a new area of conviction to his own life. "I thought, wow, that's me...that's me he's talking about," Neal explains. "Am I going to be the person that at my funeral people are going to utter those words?"

A close paternal bond had developed between Jay and his grandfather. After his death, a devotional book Jay was reading on a plane started him thinking about how loved ones that have died can never really be forgotten. "It was just a real solemn time for me sitting in the plane remembering my grandfather and the times I had shared with him, how close I really was to him and how much I longed to see him again," Jay says. Sitting in a window seat, Jay looked down and noticed the clouds below, realising that it looked almost possible to just jump right down on them, he continued his thoughts: "I was (thinking), 'When I'm in a plane, this is probably the closest I'll ever get to being where he is.' And I was just thinking we are north of what we call the sky and someday we will be north of the sky forever."

Jay shared his thoughts with fellow songwriter Dave Clark who took his ideas and crafted them into the lyric of what would eventually become the title track on 'North Of The Sky'. Jay says, "We made it into a song, not about (death), but anytime you have to have separation, any time you have change or lose someone close to you, that you'll meet again north of the sky. I think that it became a special song for Neal because of dealing with the loss of his grandmother. It was just sort of a healing song for both of us, losing somebody that was that close to us. My grandfather was sort of a father figure for me for a long time. It really hurt to lose him.

Through the early separations caused by divorce and the recent ones caused by death, Neal and Jay have emerged on the other side, wiser and stronger. Jay adds, "I do believe that although we may not understand why we go through certain things or why we have to experience certain things, I do know that everything is in God's hands. I know that there's a reason for everything that happens. I'm excited to see what the future holds. Who knows what it will bring. I'm just going to wait and see what the Lord has in store and I'm going to take this time to get focused and build my relationship with Christ as much as I can."

Tony Cummings acknowledges the use of material originally published in an article by Mark A Smeby in CCM magazine.

East to west is just another seed that God has planted on earth.l tasted the fruits when l was in my teen and now I'm a grown up man but the messages of songs are still fresh.