Eastern Block: Nashville rockers who are enjoying the broad crowd 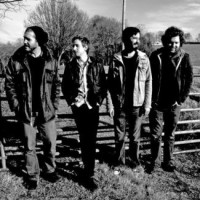 Over the years Cross Rhythms Radio has introduced many American bands to an international audience and now it's happening again as "Protecting God" by Eastern Block nestles in the CR playlist. So who are this band from Nashville, Tennessee whose music is described in their artist bio as "meandering between the ethereal and hard-hitting, from shoe-gazer and art-rock to edgy alternative"? Broadcaster Mike Rimmer met up with Aaron Ahlstrom (vocals), Jon Shearer (guitar), Sean Savacool (bass) and Jonathan Williams (drums) to get Eastern Block's story. First off, how did the band arrive at their name? Said Aaron, "Jon and myself started a new project from the last thing we were doing. We have a similar interest in history and different things and we liked the sound of it. I don't think it has any particular meaning, though eventually we all lived on the same street. So we named the band Eastern Block, it was very cute. We've gone back and forth as to whether the second word should end in a 'k' or a 'c'. Spelling it the way we do helps when people google the name."

Forming in 2007 the band found their way to MTSU studio where one Ian Anderson asked Eastern Block to record two demos for a recording technology class he had. Instead, nine months later Ian ended up co-producing the band's first independent EP 'Eastern Block'. In January 2008 the band played their first gig and have been at it ever since. Being based in Nashville has advantages and disadvantages. Said Aaron, "Nashville is a very saturated town musically, so when you go to play a show in town you definitely spend a lot of time cutting your teeth, and if you get a response you know that you're going to get a response out of town I think. And at the same time it's just as harsh a response as if you make the wrong move in this town. So yeah, it's a good place to be if you want to make a living being a musician 'cause it's not very forgiving sometimes, and other times you don't realize how spoiled you are living here." Added Jon, "Especially as a fan. Just a music fan, to live in this town, there's countless shows you can go to on a regular basis, and you know, being a writer or a musician in a band, it's usually very inspiring, at least if you have some bit of confidence in yourself and you don't run away, 'cause of all the good music."

In 2010 Eastern Block released their first album 'Past Palace'. Pitched at the mainstream its lyrical themes are mainly concerned with relationships, with several songs, Aaron admitted, inspired directly by his marriage and divorce. Said Aaron, "Songs about marriage are really relatable. A lot of people get married, and for a lot of people it doesn't work out very well. I have a lot to be happy about, for sure, and there's a lot of good and positive experiences from my marriage inspiring my songs. But there was also a divorce. I think the lyrics touch on them. But the songs like 'The Brave' or maybe the next song, 'Buried In The Sea', are especially therapeutic for me."

When asked what Eastern Block are trying to achieve Sean Savacool responded with stark simplicity, "to play music". He continued, "You come to a part of your life where you realise that you have a gift or a talent or an art form or any kind of vocation and you try to chisel away at it and perfect it as best as you can and do the best job you possibly can. Whether it's being in construction building homes or making music, writing, you try to do your best work possible. I think that I can speak for all of us that we want to do our best work each time we play a concert or record something."

So how does the band respond to those who would criticize a band of committed Christians for not making lots of overt statements about their faith in the songs? Said Jon Shearer, "I think that a band's art, the themes of their songs should come naturally out of them. It shouldn't be something you have to force or say 'we're a Christian band' or 'I'm a Christian artist' and therefore only write songs about God. Of course we are a band of believers and in our case that is reflected quite naturally without it being an overt thing."

Added Aaron, "As a songwriter I know I enjoy the broader palate. I'm not trying to run away from any particular subject. I like the idea of using a particular size canvas as opposed to a singular smaller one that might only reach a particular crowd. I think as a band we very much enjoy the broad crowd."