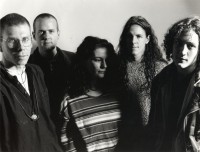 At 5.00 pm on the Sunday, the closing act at Cross Rhythms '95 are EDEN BURNING. Almost from their inception the band have been championed in the pages of this journal. But now with the Eden's "You Could Be The Meadow" and "Be An Angel" making a tilt at the pop charts, some evangelicals have begun querying the band's motives and pop-chart aspirations. Andrew Long asks Eden's frontman Paul Northup the hard questions.

It's inevitable isn't it? Any Christian band or artist who attempts to place wary feet on the dodgy-looking rope bridge that spans the yawning chasm betwixt Christian subculture and the secular music industry, betwixt ministry and mainsteam, and 'cross over' as it is known, will face a barrage of questions from Christians wanting to know whether they are 'selling out'. Some will even accuse them of losing their faith, or at least failing to represent Christianity in the lyrics of their new material.

We've seen it with Amy Grant and Martyn Joseph and even with Steve Taylor in his Chagall Guevara days and now it falls to me to become, as it were, the Spanish Inquisition to an unsuspecting Paul Northup of Britain's most recent success-chasers, Eden Burning. The band have so far had two singles, "You Could Be The Meadow" and "Be An Angel", distributed by Total/BMG into the mainstream (like real record shops) and they are gaining ever increasing profile on the club and university circuit.

I begin on safe territory by asking Paul how successful the initial launch into the mainsteam market has been.

"Very successful, although success isn't really a nice word to use. It's been successful especially in the live work in that we're very fortunate to have a very loyal and very understanding following, a largely Christian following, who are prepared to burn their boats and come out to see us in secular and mainstream venues. Not only do they come out, they bring their friends with them and we feel that non-Christian young people are less threatened about coming into live music environments than they would by coming into church halls. Essentially what we feel that we're doing when we do a secular gig is that we're transplanting a church hall audience into a secular environment and hopefully adding their friends, so live I think it's worked really well. There's certainly more of a freedom performing in such venues because there's no hidden agendas about what the person who's booked you is hoping to achieve. Sometimes it's very, very difficult to labour under the burden of an organiser wanting a certain event to be the lynchpin in their youth programme for the next five years, and you're thinking, 'Wow, sometimes it's difficult enough just to get the notes right apart from to make that sort of impact', so we've been ever so thrilled and the sort of conversations and the effects that we've had with the managers and proprietors and the staff in these venues has been, we think, although it may be very small fry, we think it's been quite eventful."

Like Torquemada in the old Monty Python sketch I begin to prod Paul with the soft cushions, asking him if Eden Burning are now forever lost to the church halls. "Not entirely, the nearest we come to it is that we will work with local promoters to put on gigs in college or school halls in a local area which could function as a youth group pull-in event. To be honest with you we've not played in a church hall for quite some time, apart from when we went to Northern Ireland recently. We feel that the environment isn't quite right for what we do, we feel that it's too much of a barrier for people and, just from an infrastructure point of view, there's just so much equipment to take in that to put on a one-off concert in a church hall is a costly and time consuming thing whereas to go and play in a venue that's set up for that sort of thing is less costly and actually, we think, more effective."

Eden Burning will however be caught doing their thing at a lot of Christian festivals in the summer including Greenbelt, Firm Foundations, Kingston, Soul Survivor and a certain magazine-related affair in Okehampton.

"Yes!" Paul jumps in enthusiastically, "because, in saying what I've said about the church halls we do not want to turn our back on our Christian audience at all, because we would be foolish to say anything else than that they are still the mainstay of our support, without which we could not go forward at all, so we want to really, really keep giving to them what they've given to us."

In the midst of all this festival-hopping is a Sunday afternoon slot at Glastonbury with Why? and lona which should prove interesting.

"We played at a venue in Shepton Mallett called The Amulet," explained Paul, "which is a stepping stone to getting on at the Avalon Stage at Glastonbury and the organiser at The Amulet liked what we did, he's quite a spiritual type of chap, although you wouldn't call him a Christian he's very spiritually aware and he's obviously attracted to the fact that we're singing about spiritual things, so we're thrilled to get the chance to play there.

Late last year the band commenced a serious attack on the charts with the release of the single "You Could Be The Meadow" which reached No 104. This was followed in February with the second single "Be An Angel" which reached No 123, both singles achieving sales around the 2,000 mark.

'"You Could Be The Meadow' is just a soppy love song," Paul explains. "We've never really released one before, but there you go, had to have a go sooner or later, there's nothing more to that than just a girl/boy love song. It's a bit of a lightweight thing."

The story behind "Be An Angel" is told in Eden's latest newsletter. It's basically revolving around the theme of people who have in one-way or another helped or inspired the band, and thus 'been angels' to them.

"There is a sense in which the help of these folks, certainly that we have received, has been like angels 'ministering' to us," writes Paul. "Now this theology may be too catholic for some and too liberal for others but it's really how I feel, perhaps we have entertained angels at our gigs without realising but I'm sure that we have been aided by angels in return. Is there an angel at your table?"