They're huge in Eire and now the thrilling musical collective known as EMMAUS are ready to zap Britain. Steve Stockman reports. 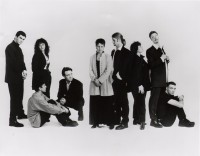 Dublin is the city of a thousand bands and, come on, we can all name at least one of them! I suppose the interesting thing is that the one that we can all name happens to be Christian too. Emmaus are probably therefore the second biggest Christian band in Dublin. They have charted in Ireland, they have released three albums and two mini albums, this summer they did an extensive tour of America before starting on Europe and amazingly doing their first ever Greenbelt Festival. Just as a throwaway, two of their number are regularly at Number One in Ireland as the main musicians behind super puppets Zig And Zag and their accomplice Dustin The Turkey. On the last album that meant having The Sawdoctors and Bob Geldof as session men.

Yet Emmaus are much more than a band. At the very embryonic beginning of the band, a twin was also conceived and the prayer group of some 10 years ago is now a flourishing Christian community in the southern suburbs of Dublin city. This lot live together, pray together and share their finances together though in no cult kind of a way. It all began as a result of the conversions of main men Ronan Johnston and Tony Kelly as a result of the charismatic renewal in early '80s Catholic Dublin. Though the boys found God in the midst of the traditional Roman Catholic church they got a little burned too. So about four of them met for prayer. "We got together to play a few songs and pray, but to keep it extremely uncharismatic. Before we knew it God had different plans. Our quiet little music group had become a wild charismatic group, and community even, and we were doing outreaches all over the place."

Today that community is 50 strong. Indeed Ronan took Emmaus off the road for a few years to build up the community while Tony formed Greenbelt-popular Little Black Train. That community is now spread across the denominations and has members from most of Dublin's recent Christian bands. What?, Watch This Space as well as the aforementioned Little Black Train appeared on a 1993 compilation 'Sounds Irish' with Iain Archer and another, Forever Remain (playing Greenbelt this year as Drown), which sold out of its 250 limited edition at Greenbelt '93. Such a surprise was this that friends who promised to buy the album when the bands came home never got one. Other musicians include cool groovin' Julian Plant and wonder-voice Lynn O'Hara from Crystal River Band and Belfast boy wonder Ian Macmillan who joined just a few weeks before the US tour and has sat in with Belfast's best dance act Booley House. Most of these bands were the stalwarts at the sadly demised Arklight, a Christian arts festival held for three years in Avoca (Ballykissangel to you!) during the early '90s.

So what comes first, band or community? Ronan has no doubts. "The community drives the band," he says. "Without it we're just a bunch of people making music and though it may be pleasing to the ear we reckon that without what we do at home, what we represent as a bunch of people then it loses its integrity." Their recent 42 date US tour in what they called the Mother Bubba Ship taught them their need for this even more. "Even the most focused, most rooted, holiest of Christians would go stark raving bonkers after a couple of months of that if you didn't have a bunch of people around you holding you accountable and supporting you."

Emmaus's integrity pours over into their music too. Do they just entertain? Ronan sees the importance of being the best. "We seek to entertain them first. We don't entertain them; they don't care about what you have to say. However, we think of it very much as an outreach ministry," Ronan says. Hailing from the non-CCM world that Dublin is has helped hone the quality. Never mind the Number One side projects or the fact that Rojo has written the incidental music for Eurovision. He is so aware that "the music stands or falls on its own merits." As a professional composer for TV and film in his day job Johnston is very frightened of mediocrity. "I can't stand mediocrity and if ever we became mediocre I think that would be a cause for throwing in the towel. We need to be excellent and excellent for God."

This demanding self-assessment is proving its worth as the band have just won a licensing deal with Lion, a new Catholic-based record company in the States. They have now distribution all over America in CCM, secular and the 50 million strong Catholic market. Another tour is an option later in the year and full time is the way it is for the time being.

So as the Mother Bubba Ship arrives at Greenbelt, Emmaus's alternative rock, Commitments-style soul meets rap 'n' rock 'n' roll, the future is so bright that they need a tinted windscreen. Eight band members and that is a paired down team, along with six crew. And do not forget the other 36 back home in Dublin who are just as important to what Emmaus has become. "Music becomes community and lives for a time among us." A sign of the Kingdom in music and life.

The opinions expressed in this article are not necessarily those held by Cross Rhythms. Any expressed views were accurate at the time of publishing but may or may not reflect the views of the individuals concerned at a later date.
About Steve Stockman
Steve Stockman is an Irish poet, author and long time Greenbelt contributor.