Esther O'Connor: The Scottish singer songwriter with a hard-to-classify style 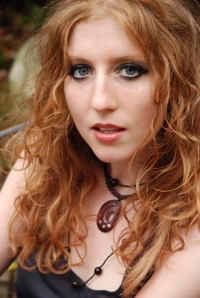 The critics are united in saying that Scottish singer/songwriter Esther O'Connor is a class act, even if they can't easily place her in a pigeonhole. BBC Radio Scotland suggested her style was "somewhere between Suzanne Vega and Sheryl Crow," the Scotsman described Esther as "the country-ish K T Tunstall while Get Ready To Rock magazine said that Esther's 'Right Here' album "covers all the bases from pop to country to rock and folk." Maybe the best response to Esther's pure and beautiful music was demonstrated by presenter on BBC Coventry. After she had sung live on the station there was a long silence before the presenter exclaimed, "Oh, I'm sorry, I don't know what to say. We don't usually get singers of this quality coming in to the studio."

Esther visited Cross Rhythms to sing some songs and talk about her music, her new album and her faith. As Esther Duffin, the singer grew up immersed in music, her father being the renowned guitarist Graeme Duffin who recorded and toured with Wet Wet Wet. Hers was an extremely musical upbringing. She laughed, "I was at a folk festival when I was 10 days old in a little basket, brought by my Mum and Dad. They're both passionate about music and I was taken to my Dad's rehearsals when I was about two and put on top of an amplifier - my Mum was working and my Dad was rehearsing in the band. So it's in my blood. Dad is a phenomenal guitarist and had a wonderful career. My brother Jamie and I were very lucky to be able to travel with Wet Wet Wet, seeing the live shows and experiencing the touring thing. It is great to have those memories as a child."

With Graeme being a committed Christian there was none of the rock'n'roll excess which can so often blight the lives of rock music children. Commented Esther, "I think part of the reason he managed to keep his feet on the ground is he's a very honest person and he's pretty self-aware. In that sort of a job in the music industry there are people who are kind of idolising you and it is very difficult to keep reality and spiritual maturity about you. I don't know if this is a bit of an urban myth but I've read when Bono comes home after a world tour his wife makes him take some solitary confinement for a while till he comes back down to earth again. They both know that's what he needs to do. My Mum and Dad come from a Brethren background and they've had a lot of experiences when God became very real to them."

In the same way that music became part of Esther's life at an early age, faith too came early. "I think it's been a journey really - a continual journey of awakening, awareness. There have been significant times in my life - I certainly remember as a child having a sense of wonder as children have about life and about God and a love for God in my wee heart. But then you live your life and you come up against situations which will shape you, if you let them. There's a good quote by a guy called Father Richard Rohr, 'It's the things that you can't control in your life, the things that you can't change that if you let them will be the things that change you.' We want to change reality but reality wants to get to you and change you. I've had a few of those experiences where life maybe hasn't gone the way I wanted it to go. But there are other times when God is just so tender, he's there and it's great."

Esther got her first opportunities to sing in church. She laughed, "One of my earliest memories of me singing is in my little pink dressing gown with bits of string tied to my hair for some unknown reason singing to 'Angel Eyes' in my living room, just pirouetting about. I kind of regretted that one later, particularly as my Mum has it on video!"

By the time Esther was seven she was a seasoned trooper. "Mum has a tape of me singing with my Dad playing guitar and I was doing all these key changes and stuff." Esther also remembers singing on an early children's ministry album by the King's Kids, 'Harvest Fields'. "I remember being asked to do a couple of verses of a song and people were like, 'Wow, you've got a really great voice.' But I never thought I had a great voice and just sang it." 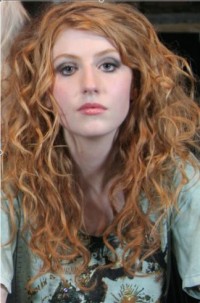 Esther continued her story. "When I was about 14,15, I began to sing with my friends, writing songs and playing about on a guitar. I started to showcase for major record companies while I was still at school. I remember going away for a week and I was supposed to be studying but instead of studying, I took my guitar and wrote half a song. So I was definitely much more interested in music than I was in biology."

As it turned out, one of the first songs that Esther ever wrote, "Beautiful", was to eventually appear, accompanied by a lovely string quartet, on her first album. Esther remembers the showcases before music industry big wigs. "I suddenly had the head of Virgin records coming up to Glasgow to see me. I had four or five record companies fly up to Glasgow to see me showcase and I was terrified. It was really not an easy time. I signed a publishing deal when I was 17 and a record deal when I was 18 and again I had fairly mixed feelings about it. I think because I'd gone into it so young that it was quite a challenge really, a lot of nerve-wracking experiences, quite a lot of anxiety but I knew I wanted to do it enough to sign the deal and do the thing and I was like this is such a good opportunity, I can't pass it up. So I had to go ahead and do it. I was in that deal for two and a half years. I put a band together called Ashton Lane after a street in Glasgow. It was an amazing time."

But despite the big publishing and record deals nothing got issued and eventually Esther was released from the contracts, seemingly another talent whose potential hadn't been realised. Then, in 2003, Esther decided to record and release an independent album. Under the simple billing of Esther, the singer/songwriter put out 'The Place Where We Are'. Explained Esther, "The album was recorded after I'd just come out of my deal. I was in a bit of a space that things had not exactly gone as I'd pictured or wanted. It was an album I enjoyed making. I felt it was a therapy thing for me, getting back into the studio and writing and channelling all the different experiences - relationship experiences, career experiences, spiritual experiences and channelling those things that you feel life is kind of teaching you into your art and into your craft. It gave me a great sense of fulfilment."

Some of the songs on 'The Place Where We Are', like "Beautiful", "Fragile State", "Nirvana Man" and the title track, are still performed by Esther today. Esther is the first to admit that only a limited number of people got to hear 'The Place Where We Are'. She explained, "I recorded it and it was as much as I could handle at the time. I didn't do much with it for a year or so. I did the odd gig; I just did whatever came up. If someone came up and wanted me to do it I would do it but I did less and less performing until I was just not doing very much music at all. I came back a couple of years ago and thought right, I'm not doing any music, this is ridiculous. I felt really down and I needed to get back gigging again. So I got myself back on the acoustic circuit and started to perform again, which was actually quite terrifying, getting back out because I hadn't done it for quite a while. I had gotten married and my husband and I began to do little acoustic gigs and also I began to work with my brother Jamie. We did some songwriting and recording together. We put a band together and we've got another couple of session players who play with us and we do a lot of acoustic gigging together."

In 2007 Esther began working on the 'Right Here' album. She said, "It's an interesting bit of a collaboration really. Some of the songs were ones from a number of years ago that I had recorded when I was with EMI and they were great songs, are great songs. But when I came out of my deal I was so close to them that I thought, right, I'll just have to leave them for a little while so I didn't put them on my first album. But it's been quite interesting really the way this album shaped up. I got back in the studio and used five tracks from the EMI time and five brand new songs and it just jelled together. It's an album that's got a lot of continuity and it's got an Americana-Celtic-y, folky, pop sort of feel to it and all the songs just sort of locked in together. My musical influences are reflected in it as well. I've got quite a lot of '70s stuff in my collection, people like Bonny Rait and Janis Joplin, James Taylor, Carole King and Joni Mitchell - these fantastic greats. Fleetwood Mac was another big influence."

One of the outstanding songs on 'Right Here' is "Hope", written about a young lady Esther met on a youth exchange that she was involved with while taking her time out from music. She explained, "We did a youth exchange with some kids from Blackhill in Glasgow and some Zambian kids. I met a young girl called Hope and she just kind of showed me about a different worldview. She made a comment and said basically, 'I don't have anything materially but I've got so much treasure in Heaven.' And you could see it in her. It was awesome. In fact Tim and I just came back from Zambia about three weeks ago, we had an amazing time there. I find songs have got an amazing way of getting under people's skin and it's not necessarily a head thing but they feel something, sense something. The lyric in the chorus of 'Hope' goes, 'You see Heaven is just a breath away.' We're all spiritual beings and people have a sense of the other, a sense of something beyond the world we see, feel and touch. People have a sense of it without always being religious about it. They call it the mystery or they call it something different. But because we're all spiritual beings we all sense it."

Such a warm and tender story of Love for God and people. An angel received.