In our continuing series documenting the roots of Christian music we highlight easy listening pioneer EVIE. 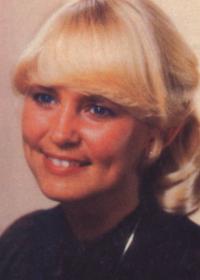 The easy listening style of Christian music dubbed "inspirational" by American radio execs has an intriguing pedigree, evolving from the sacred solos and hymnody of the '50s and '60s. By the '70s the style had evolved into the sweet concoction much loved by many of today's middle of the road church-goers. A seminal figure in the development of the inspirational music style was a sweet-voiced singer who was one of Christian music's best selling artists of the '70s, Evie Tornquist. Born to Norwegian parents in Rayway, New Jersey, Evie grew up singing in church, performing with her mother in churches and schools. It was while singing at a camp meeting in Norway when she was 14 a TV director spotted her and asked her to appear on the Norwegian version of America's Tonight Show. From there, little Evie was catapulted into Scandinavian superstardom.

Evie soon returned to the States, where she was an average high school student who liked bike riding and needlework. But Scandinavia wouldn't let Evie rest. She spent one week every month across the Atlantic, singing at churches, youth rallies and more television programmes. Soon her fame in Scandinavia spread to the USA, where she later became the object of much discussion in a small town in Texas. Waco-based Word Records, then the largest Christian record company in the world, signed 17 year old Evie to a recording contract in 1974. Her first album for the company, 'Evie', became an immediate bestseller.

As CCM magazine commented, "In the midst of a me-first generation she was a modest teenager, exemplifying a Christ-centred life." Touring Canada, Australia and Europe, Evie's sweet toned singing won over huge audiences while her albums 'Evie Again' (1975), 'Gentle Moments' (1976), the Swedish language 'Du Skulle Vara Med & Sangen' (1976) and 'Mirror' (1977) all became best sellers. She sang in Carnegie Hall before the King of Norway and sang at the White House for the US president.

In 1977 Evie enjoyed her biggest ever success with the Christmas album 'Come On Ring Those Bells' with the title song today considered a yuletide classic. More albums for Word followed but getting engaged to Pelle Karlsson, a pastor of a church in Stockholm, Sweden, meant Evie gradually slipped from the public eye. The singer officially retired from full time ministry in 1981. Evie's last Word album 'Unfailing Love' topped America's CCM charts. Two concept albums with husband Pelle, 'Teach Us Your Way' and 'Restoration' and more recently a children's project 'Songs For His Family' credited to Evie & The Karlssons were Evie's last releases. But it seems that Evie is happy in her role as pastor's wife. In 1982 she told CCM magazine, "As a wife I see my ministry first of all to my husband and our child. Nothing is more important. If we travelled around the world ministering to hundreds of thousands of people and yet those closest to us suffered, we're talking about hay, wood and stubble. I think God requires of us that we take care of first things first."

I love Evie. Her music was so pure and inspiring, they brought out the best in you and promoted your love for Jesus and His kingdom. I miss her so badly in Christian music. I would love to get all her music for keeps and share it with my children. God bless her.

I have had several of Evie's early recorded albums and would LOVE to get some of those songs on my Itunes program in the computer.

I have Evie Again in front of me but the old tape won't play anymore. I have played it far too many times. Is there anywhere on the web that some of her songs of early days have been saved? I love them...especially ones like "Give it all to Jesus"...so sincerely, ruth Campfield-Fuller

Ruth - some of Evie's old albums and her new hymns album are on iTunes. And more recently, some of her old albums have been made available on amazon.com in CD format. You can also find 2 compilation CDs on her website eviemusic.org

I bought the Christmas album 35 years ago and my children grew up with it. My foster son who has no urge to get involved with Christian matters remembers the album as being part of the only good Christmases he knows. . Now he has my album- it was the only thing he wanted from his time with our family.

where I buy "Teach me Your Way" by Evie

hi evie,for long i have been trying to find this christmas song"come on ring the bells"at last i got it on youtube thaks.i love gospel singers and i love the way Evie sings.may Jesus Christ bless her and give
her the power to continue this holy proffession
love you evie
your listener louis

WHERE CAN I FIND AN EVIE SONGS FROM SOUTH INDIA? A CD/DVD PERHAPS? I'VE SING HER 2-3 SONGS,BUT I WUD LOVE TO 'VE HER RECORDS.

Go to http://eviemusic.org/wordpress/, where you can purchase a few of Evie's CD's!

I was a baby Christian the very first time I heard Evie sing the song 4ft 11 and going to heaven. It was also at that time that I heard her sing Give Them All To Jesus, which is a song that I performed at Church camp one year.

I love her music and I would like to get into contact with her to find out if I can get permission to use her song "Give Them All To Jesus," I am wanting to use this particular song as my ministeries both opening and closing.

The name of my ministry is..." The Brats" which stands for Reaching All Teens for their Savior Christ Jesus. We work with teen's who are absolutely lost and in need of the Lord. To my knowledge the ministry that the Lord has laid on my heart is about the only one like it in the United States. We open our home to any and all teen's who are in need of a place to go, to get out of a bad situation. We can't do much if the teen is under the age of 18. The vision for the ministry is to reach as many teen's with the gospel and win them to the Lord.

If there is a web site to where I can contact her please contact me on Face Book which is under Armilda Eldridge George.

Thank you so much for your help.

For more on Evie visit the Evie artist profile