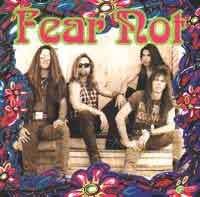 After years of doing the 'music journalism thing', I've come to find the recording industry to be a very interesting animal. I was again reminded of this when I received the record company bio for Fear Not. It blithely ignores the fact that the band previously recorded as Love Life and makes it out as if the team are a carefully watched-over new discovery. Hardly! As Love Life, the band presented stuff to Pakaderm, who gave them the typical industry run-around...'til Love Life came into Pakaderm West to record their debut album for Blond Vinyl. As Love Life's former manager related to me, the Pakaderm fellows were less than pleased by this turn of events. "John and Dino (Elephante) didn't dally around when they got a second chance, though. And I believe all of us are the happier for this."

If you liked Love Life, you will like Fear Not. If you didn't, try 'em again. John and Dino have given Fear Not, now consisting of Chris Howell, Larry Worley, Rod Romero and Gary Hansen, better production without losing the punch of their sound. The band's drummer Gary Hansen spoke about the transition from Love Life to Fear Not.

"We had a big dream with Love Life and it didn't really happen. The label we were on was an alternative label and didn't really know how to promote a rock band or have the resources to. In the rock industry, you're up against people who have a lot more money to promote and put out a better record. We went through some member changes and direction changes. We got a little heavier and the name Love Life didn't really fit the new sound. Michael Cutting (ex-Holy Soldier) came in the band for a little while and had a name Fear No Evil. He left, because he wasn't into the fulltime ministry and fulltime touring, and when he did, he took the name Fear No Evil. We thought, 'Shoot, we'll just call it Fear Not.' Two weeks after Michael left the band we did a showcase with Pakaderm and got signed."

So how did the ex-Stryper superstar come to momentarily join Love Life?

"Michael and Larry started working together, out of the blue, painting apartment buildings," explained Gary. "They started talking and jamming at lunch a little bit. We let Michael in the band and Larry dropped the guitar. It was great, as far as chemistry, and musically it was a really cool sound. After we did some recording, Michael decided not to do the fulltime band thing. And Larry was itching to play guitar again anyway."

Fear Not are now toting a new guitar player, Chris Howell. "He joined the band before Michael, when our old guitar player, Darin Eby, left. He used to be in Showdown. We met Chris at the NAMM show. We gave him the Love Life CD, and he didn't really like it. So we sent him our new demo and it was exactly what he liked, so he joined the band."

After the band signed to Pakaderm the band weren't particularly keen to recall the Love Life era.

"We just wanted to start over with a new label and a new name and not really dwell on Love Life. But you know what's strange? That was our original idea, but after going to the Midwest (playing the Cornerstone Festival), we discovered there's tons of Love Life fans...so we might have to rethink that. We didn't realise how many people knew who we were. We played one of our Love Life tunes and the whole crowd was singing it."

So what is the real difference between Fear Not and Love Life? "Recording-wise and band member-wise, just musical and spiritual maturity, I would say. Also, Chris has a really different style of playing. I think Larry sings a little better now, too. The songs are a little slower and more heavy."

There have been spiritual changes in the band. "I think we just realised where we're at," said Gary. "When Michael got in the band, we were thinking about looking for a secular deal and doing that route. We're not closing any doors on ourselves, but at this point we're more into reaching the lost sheep that are sitting out there bored. The sheep in the church rather than the people in the world, in the bars and stuff. Although we're still gonna play clubs."

Is that a substantive change from Love Life?

"Oh yeah, I think it is a lot. We really didn't know what we were doing with Love Life. We were trying to go towards the world rather than the other way."

What do you expect Pakaderm to do for you that Blond Vinyl didn't?

"We had two weeks in the studio to make our first record. We spent three months in the studio on this one. The distribution is gonna be a lot better. And we're already seeing, before the album is out, more publicity than we saw the whole time with Love Life."

Fear Not are determined to press on into '94. "We wanna be a fulltime band. We wanna go out and tour the world, basically, and do what God calls us to do and play music. Right now, we're in discussion with a management and touring companies. We don't have a manager, and we don't have a booking agent. We're trying to set up all our things. We don't want to go out there and get burned. We've heard nightmare stories from bands about going out on the road too soon and people not paying 'em and ending up stuck in the middle of nowhere with no money and no gas and families at home with no money to pay their bills. The whole band...we put our families first. We want to be able to survive, take care of our families and spread the word.

"We hope that everyone likes our new album. We wanna make this a long term thing. Something that the Lord's really been putting on my heart is to trust in him. That he gives and he takes away, and for everything that you receive from him, you should be ready to give it up and more for him. You have to trust him."

This article first appeared in Heaven's Metal and was used with permission.