Galactus Jack: Are you ready for electro grunge with a side order of pop?

Galactus Jack, whose turntable hit "Control" is currently wowing Cross Rhythms listeners, is a hard act to pin down. The DJ/producer describes his sound as "electro grunge magic that rides the fine line between rock and dance with a healthy dose of pop for good measure." It's Galactus Jack's aversion to pigeon holing/type casting that probably explains how he's ended with three individually named personas. As Ben Jack he's a one-time British Youth For Christ worker who between 2001 and 2006 was a third of Aorta whose blending of house music rhythms and creative worship pioneered something fresh in the Church. As Benny J he is the popular radio presenter on Cross Rhythms Teesside presiding over the breakfast programme. And as Galactus Jack he's the creator of a dazzling original EP 'Reality Bytes' which with its driving rhythms, breakbeats, chunky guitars and guest appearances from top talents like Shell Perris and MC Ad-Apt (formerly Presha from thebandwithnoname) is a truly outstanding independent release.

Speaking about the album on its release Ben said, "It's been a two year process from concept to release to get this record made. Over that time the sound of Galactus Jack took some twists and turns and resulted in the record you have before you now. I'm so excited to see how people connect with the music and the concept of the lyrical arc which is focussed on various aspects of reality in the day to day. Many things changed during this record, but one thing stayed the same, my absolute desire to see generations encouraged, challenged and inspired to live distinctive, authentic and 'real' lives for God. The music is just an element of that, but I hope that in some way it draws those who listen in his direction as well as moving them to the dance floor."

I asked Ben why Aorta folded. "It's like everything in life really, you plan for the future, you try and align your plan and your heart and your passion with what you believe God wants for your life. When you're operating in something like Aorta which is three incredibly creatively minded people who probably are more creatively minded than practically in many ways, thinking about the future and what you want to do. So Aorta up to that point had been doing its thing. Andy, one third of us, moved to New York to go and work for Times Square Church, which was an immense experience for him for three years. He's back in the UK now, but he went off and that did change the shape of the group. Not so much in terms of touring because Andy had never been particularly proactively involved in the touring side of things, he had always been more a back room guy doing the production stuff, but it did make getting together to do a full length album difficult. We got a new single ready together and we were on the crest of actually releasing it at one stage. But Si got married and life was just different for him. His heart was really more and more about deejaying in clubs and he was doing a lot of local deejaying in the bars and clubs where we lived. So he was really excited about a ministry that was him being a professional deejay. Simply being a Christian in the secular industry. My thinking was more gearing towards doing a band type of sound because my taste in music is incredibly broad. I like so many different things and wanted to try fusing different elements. So we decided to call Aorta quits. We knocked it on the head in the summer of 2008. We did our last gig in a thing called Rave In The Nave which is at Ely Cathedral with Four Kornerz and the Austin Frances Connection."

The musical glories that were Aorta can be heard on the various artists charity album 'The Rose Sessions: Vol 1'. Also on that groundbreaking compilation, masterminded by Ben, were several turntable hits. "Rainbird" by Sandi Thom, "Heaven" by Lindsey and "Headspace" by Galactus Jack. "Headspace" features the vocals of Christian pop princess Shell Perris and is also a standout track on 'Reality Bytes'. Ben spoke about 'The Rose Sessions'. "I got introduced to a couple called Maurice and Margaret Dimmock who are the founders of an organisation called The Rose Education Foundation. The Foundation exists to better people's lives around the world through the use of education and financing educational facilities, projects and so on and so forth. Andy Robinson, from TVCN, the parent company of Cross Rhythms Teesside, and I were invited to go with them to film a promotion video about The Rose Education Foundation and look around some of the projects and to see if we could partner up and work together. That was an incredible experience. During a flight between Malaysia and Bangkok Maurice and I started chatting. It was a very bumpy flight and neither of us enjoyed flying so we were talking to try to keep away the fear. I asked him what he had for bringing in money into the Foundation to redistribute to these different projects. He said, well we are doing this, this and this. So I said, 'Well off the top of my head why don't you think about doing a CD? It's great on many levels - for exposure but also for finance - a product to sell.' 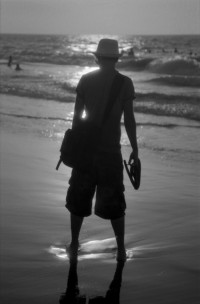 "He said, 'Okay, go away and think about it'. So I went away and planned it and came back to him and said, 'This is what it's going to cost to do, this is who I can get involved.' I had about five artists lined up by this stage to be involved in the project. Maurice said, 'Right, okay, do it, make it happen for us.' So I went away and managed to coerce ten artists to give me a track from their repertoire for no royalties so that the CD could be produced absolutely cheap as chips."

Now after two years of toil, Ben has finally got the Galactus Jack CD out. Why, I asked him, did he call it 'Reality Bytes'? "It's a bit of a concept record in some ways. I don't want to sound too pretentious but the whole album is infused with the concepts and the ideas of reality - 'What is reality? What does it mean to be real, to be authentic?' All the things that I'm into I try to infuse that. I've had some great session musicians playing on the records. I had some cool guest vocalists come in to do some stuff."

So what is the spiritual purpose behind Galactus Jack? "Earlier, I was talking about Si from Aorta going off and doing his deejaying and being a Christian in a secular industry. I want nothing more than that really and I guess for me it's having an opportunity to have conversations with people. I live to converse with people. Sometimes that's one sided through maybe writing an article that gets published somewhere for people to read or on the radio chatting away or through music. But equally, someone listening to that music and responding to it and getting in touch via email, coming to see you at a gig, asking you to go and speak at an event or something like that, and having an opportunity to converse with them face to face. Equally also then being involved both inside the Christian music industry and outside of it to get alongside like minded professionals I guess, DJs, producers, session musicians. I don't feel the need to use a Christian guitar player to play the guitar on my record but I do feel the need to be me while we're doing that session and have some great relationships. And life is about relationships and if Galactus Jack allows me to combine my passions for deejaying, dance music and having a rocking good time with being an authentic person to God's glory and reputation, not mine, through relationships, then I have been incredibly blessed."

I love you mr ben jack - you are a legend and a top bloke to boot!!