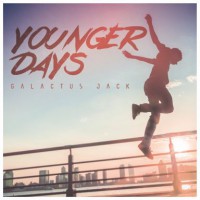 AFTER HIS high-profile, mainstage appearances on all four days of the Big Church Day Out, Britain's EDM maestro Galactus Jack has announced that his full-length album, 'Younger Days', tracks for which have already been drip-fed to the public through EP releases, will be issued on 15th June. Read a press release, "The album features the summer pop anthems 'Lay It Down' and 'On My Mind' - featuring the talents of popular singer/songwriter Philippa Hanna and evangelistic party starters Twelve24 respectively - as well as the Afro-inspired beats of Baba Oluwa and the laidback pop hit '100' featuring Dawn Elektra. The heavier side of Galactus Jack is in full force on the tracks '82' - featuring in-demand producer Geek Boy - and 'Lionheart', a collaboration with rising Dutch DJ Roberto Rosso and featuring the vocal skills of Wilkinson hype-man Ad-Apt, as well as on the trap stylings of 'Breathe Again'." The title track is a collaboration between Galactus Jack and Australian spoken word artist Joel McKerrow.