Gareth Davies-Jones: The singer/songwiter who has gone full time 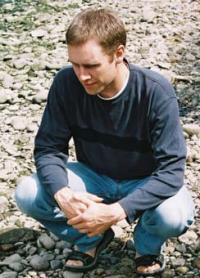 The music industry has always rewarded the few at the expense of the many, and the Christian music industry is no different, except that there's even less to go round. It takes a great step of faith to go full time. An English singer/songwriter with a very Welsh name Gareth Davies-Jones has taken the CCM vow of poverty and from earlier this year is a have-guitar-will-travel full time musicianary.

The music bug first bit Gareth when he was 16 and had started playing guitar. "I was in and out of bands as a teenager, garage bands, '60s covers bands, things like that. I came away to university and realised there that just to believe in Jesus wasn't enough. You had to do something about it, go and use your gifts and talents to honour him and glorify him and tell other people what it's like to live under him. So we started up a band called Two Small Fish, which was sort of a pop band, and we did that for two or three years in the Northeast. That kind of stopped when me and my wife had kids, and it seemed to come to a natural end. I carried on with my career working in a telecoms company. I actually forgot about music completely, in a way, thought that was it for me."

It wasn't to be the end. God had plans for Gareth's musical talents, even if it would take a jolt to get things started again. "About two years ago there were a few events that happened in our family life that were pretty tough, and I found myself going to the guitar again and writing a song for probably the first time in about five or six years. From that point onwards things really started to flow out again, and I really felt that I'd had a creative barren wilderness for all that time. To cut a long story very short...we got to a point where we felt this was really something God wanted us to move into." The conviction that this was a ministry that was worthy of full time attention led Gareth and his family straight into a classic problem: "If we were going to do this full time how on earth can we fund it? A lot of prayer and a lot of thought went into it and initially we were thinking that as I was a salesperson with this telecoms company, we could try and build up enough money that way. Maybe after a year if we had enough maybe go at it for three or four months. But then out of the blue my part of the business decided they were going to offer voluntary redundancy. So we took it. I left at the end of March and we set up our own little record label called Heading West Music, which is going to service my recordings, and we're going to attempt to do the distribution and everything ourselves."

It's a bold move and it hasn't gone unnoticed. "Some people have come up to us and said, 'Wow, what a brave thing to do, throwing away a career of 10 years with a big corporate company to come and do this,' but sometimes we feel it's more stupid than brave! Now Gareth has been busy in the studio. "We actually budgeted initially for seven days but it stretched out to 13 days worth of recording, and then quite a lot of time mixing it afterwards. But I wanted to get it right. It ate up the money, but we're getting out there and doing concerts and gigs from September. I've bought myself a big old Volvo estate with bits falling off of it, and the lights and the PA can go in the back of it. Have kit will travel, basically." 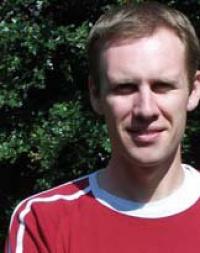 Heading West have already released Gareth's EP 'Days When I Wonder' and have just put out Gareth's excellent solo debut album 'A Play Upon The Conscience'. Comments Gareth, "It gathers together a collection of songs that I think are inspired by the love of God, the truth that God gives us and the justice that God wants to see us provide for people. Those are the three things that I'm passionate about."

It's a message that Gareth is quick to apply to himself. "I guess primarily the finger points at me. It's all very well to stand up on these platforms and tell people what you think they should be doing, but do it yourself first. I've had a lot of things recently in my personal life that have really brought it home that there's a finite time that we have and you can't waste it, but do your best with what you've been given, and don't hide your light under a bushel either. If you've got something to offer then go out there and try it."