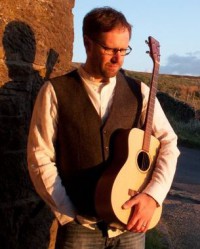 SINGER, songwriter and acoustic folk artist Gareth Davies-Jones has released a new single "What We Leave Behind" for free download. Said Davies-Jones, "Back in the autumn last year I accepted a song commission from Christian Aid looking at the principle behind and impact of legacy giving, ie, folks who decide to leave something in their will to further the work of organisations like Christian Aid. I was delighted to pick up the challenge and look positively through music at the difference a gift can make long after we're gone. I hope you find the result uplifting and inspiring. As mentioned, the download is available free of charge. However, if you would like, there is an option to make a donation to Christian Aid in response."

Gareth is undertaking a UK tour which will feature a special exhibition about Bolivia and the chance to hear more about the work Christian Aid and their partners do there. The eight-date tour commenced on 21st April in Leamington Spa and concludes on 4th August at Redefest, Rochester.