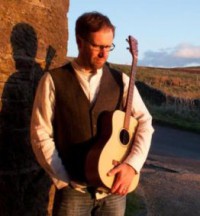 BRITAIN'S popular acoustic roots songsmith Gareth Davies-Jones is currently in the studio recording songs for his second Christmas album. The working title for the project is 'The Darkest Midnight In December'. It will include a piece of prose about Advent by renowned writer Frederick Beuchner adapted for piano and vocal and some "much loved seasonal favourites". There will be a launch event in December in the North East and Davies-Jones will be touring Northern England and Scotland, performing songs from the album.