The vast recorded repertoire of GARTH HEWITT was acknowledged with Word's four-CD boxset 'Journeys'. If that wasn't enough music to ponder, the veteran now weighs in with a new album for ICC. Tony Cummings quizzed Garth. 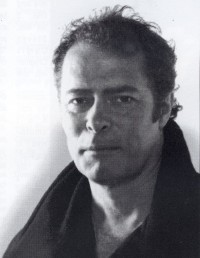 No singer has done as much to encourage the Church to develop a social dimension to its faith than Garth Hewitt. His achievements down the years were recently acknowledged by Sir Cliff Richard who said, "His commitment, expressed through issues of Christian justice and responsibility, has been a wonderful example, and his cutting edge lyrics are more effective than many a sermon or leaflet."

I went to Garth's office in an historic church building which now houses Christian Aid and his ministry Amos Trust. I began by asking Garth why he decided to leave Word, the company for whom he first recorded in 1973. "As much as I respect all the people at Word I felt it was time for a change. I was at the end of my contract with Word and there was a chance of a new relationship with a new company. It's been a very friendly evolution."

Tony: Tell me about your ICC album.
Garth: "I think this album is in some ways different but there are also echoes of my particular roots. The album is called 'Gospel Singer' and it was produced by Paul Field. Musically I think there's a taste of country there. People who've been with me on albums like lonesome Troubador' will like this one."

Tony: Word have been busy re-issuing your back catalogue in recent years.
Garth: "I think what the 'Stories' series has done successfully is put together all those songs from my repertoire based around particular locations. I do think there are some other tracks I would like to see released at some stage, which are on albums which are not available now. I think there's one more compilation, which needs to be done sometime.

"I felt it became my vocation in my journeys around the world to pick up stories from peoples who have been forgotten. Also stories from the world Church. I believe I understand the Gospel better from what I've heard from believers from different parts of the world."

Tony: Doesn't the title 'Gospel Singer' have rather an African American connotation?
Garth: "A phrase like that is often used to denote a particular style of music, but I'm not talking about a style, rather the content. The first song on the album is an old gospel song called 'Guide My Feet' which I came across in a book. It had a melody line there. I don't read music so I got my wife to work out the melody. I didn't quite like the tune so I changed it a bit. Paul Field didn't know it either, but we recorded it, and then my daughter told me that she'd sung this very song at Greenbelt with the lona Community. What a small world! It's a lovely prayer, 'Guide my feet as I run this race.' This song sets up the album in a way. It sets it up musically too, in a way, as it introduces the instruments which are going to be played. Then the album begins to explore issues like the character of God, and the Church - what is this community? The song 'Community Of Love' was born out of a visit to Honduras and the churches I visited there. Those churches, soon after that song was written, were tested incredibly by Hurrican Mitch. The album finishes with a song called 'The Followers', which is about lessons I have learned from followers of Jesus of Nazareth, and again, it's very much about the character of the community which we are called to be. I hope at the end of it, the album will open people up to some of the spirituality they can find in Christ. I hope, it will also show some of the roots from where I started."

Tony: A lot of people are disappointed by the content of American CCM. It seems to lack a social dimension.
Garth: "It only sneaks in with certain people. I do remember once a friend of mine being pushed off a major US Christian record label in the States with the famous sentence, 'Justice doesn't sell.' This is where one has to challenge the industry and ask them, 'What are you more concerned about, profits or the Gospel?' I think that an aspect of the ministry that's linked with music will often be prophetic and if that's not there then Christian music will be incomplete. If we look at the history of black gospel music, the way that it was born out of struggle for freedom and justice, it's a wonderful heritage and I think it gives us some clues to the way we should use music now."

Tony: Isn't a reason Christians struggle with the social dimensions of the Gospel because of a sense of powerlessness one feels when considering all the suffering in the world?
Garth: "I often say to people, 'What should we do?' and I will give them one thing to do. It's not that you take on the suffering of the world, but you can do one thing. A lot of people use the fact that there is so much suffering in the world as an excuse to do nothing. I think it's the five loaves and two fishes, it's the simple act - give that to God, live your life and something happens. One quote I use sometimes is the white priest down in South Africa during the apartheid era. He raised his hat to a black girl in a hospital where she had brought her son. The young lad had never seen a white man treat a black woman with respect. That priest then began to visit them every week and the boy came to faith. That boy went on to become Archbishop Tutu. What I would say to people, 'Live as a Christian, respect others' dignity, pray and we will have an effect.'"

Tony: You have long been recognised, and sometimes caricatured, as belonging to the political left. Have your political perspectives changed over the years?
Garth: "I think my views have remained fairly constant. I was very influenced as a teenager by hearing Dr Martin Luther King preach, not far from here, on his way to collect the Nobel peace prize. The sort of principles he drew out of the Bible are principles that really rang true for me, and I've always tried to follow similar principles. If you look at certain aspects of socialism or Marxism you could say that there are aspects which are very close to Christian faith. The fact that they were then distorted by totalitarian regimes doesn't obliterate the fact that people were trying to bring idealism into government that would make the world more just. I think we have learned a lot of lessons through that whole experience, but nowadays we are faced with a capitalism that is all consuming. Things are valued only if they make money. The message that if we consume, it is good and it keeps the wheels turning. But what about people who are living a simpler way of life? How much value do you put on loving your neighbour? think at the end of the day my politics are very much informed from my Christian motivation, particularly the motivation for love and through that love make a more just society."

Tony: One of the most intriguing songs on your new album is "In The Name Of God". Tell me about that.
Garth: "It's about Yigal Amir who killed Yitzhak Rabim and he said he did it 'in the name of God.' So I'm asking him, In the name of WHAT god?' One of the things I would want to say to people like that is, 'What is the character of the god you are following? Think it through, for if your god is excluding others, is ignoring most of the people of the world, why should we follow your god?'"

Tony: Do you see any signs of increasing church unity in Britain?
Garth: "I think it's interesting how many millennium events are being organised by churches of different traditions working together. In the States the different church groupings seem much more cut off from each other than in Britain. I've spent quite a lot of time in the States trying to get dialogue going, but it's very difficult. One of my concerns that I raised with an American record company was the domination of American music over musics from other parts of the world. There is an imperialism about that. The response was more or less, 'Unless people come and live in America we're not interested in their music'. That worries me."

Tony: What projects have you been working on recently?
Garth: "I recently did a musical 'The Feast Of Life' which I wrote for Christian Aid. It wasn't all fresh material, but putting it together and getting it launched took a lot of time. Now I've-just got a book coming out called A Candle Of Hope which is an advent book and it goes into the new year. I am talking about a new project which I want to start at the end of 2000, and hopefully, I'll go oversees to look for material for that. I'm very concerned about a community in India called the Barras who used to be called the Untouchables. I want to reflect their culture and also the theology that comes out with this group. I don't think that project will be out 'til Christmas 2001. People ask me, 'Why did you pick up so and so,' and I say, 'I feel a nudge.' I remember the Palestinian thing. When I first started talking about that people were shocked and all I could say was, 'Somehow God has challenged me.'"