Geoff Moore & The Distance: The US pop rock group

Down the years one of the classiest American AOR acts to put albums in the CD racks have been GEOFF MOORE AND THE DISTANCE. Mr Moore was quizzed by Jan Willem Vink. 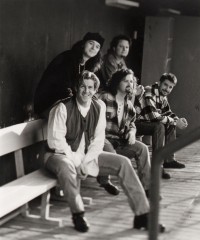 Geoff Moore and the Distance

If there's one band whose following has grown exceptionally over the past decade in the United States, but seems to be somewhat ignored by the large European audience of CCM, it must be Geoff Moore And The Distance. Probably this is because the band has only rarely visited Europe and never the UK. Musically, Geoff Moore And The Distance can best be fitted in between bands like White Heart and Petra on one hand and Steven Curtis Chapman on the other. Geoff writes hook filled songs which are nevertheless biblically-based very much geared to encouraging young Christians to live a godly life. With long periods committed to touring, Geoff Moore And The Distance have become a top level stadium rock band.

Geoff Moore was born February 22, 1961 in Flint, Michigan, the youngest of four children. While his sister and brothers studied music as children, Geoff showed no interest in music and focussed his attention on sports. Although Geoff's parents were not believers when they were first married, they were by the time he was born. Geoff recalls his father, who died while Geoff was a sophomore at Taylor University, and mother as "sound godly parents." Geoff accepted Christ at the age of five, but it wasn't until the age of 12 that he believes he acknowledged the Lordship of Christ in his life.

Geoff's childhood and adolescence were spent in a series of small communities on the outskirts of the Detroit metroplex. As a result, his musical roots are mixed. While in high school Geoff was greatly influenced by the music of the Detroit area, particularly the "blue collar" rock bands ala Bob Seeger. Yet this music lacked the Christian sensibilities he grew up with. It was in his late teens that Geoff discovered Keith Green's pioneering 'For Him Who Has Ears To Hear' album. This was the first time he had heard contemporary music with Christian content and it made a big impact.

After graduating from high school, Geoff attended Taylor University and majored in business administration, intending to help run the family's steel fabrication business after graduation. However, while attending Taylor, a classmate by the name of Arlin Troyer (the original bass player with Geoff's band The Distance) introduced Geoff to the wide world of contemporary Christian music. Geoff and Arlin made a regular practice of learning songs from records and singing them in the dormitory's communal bathroom - "A huge porcelain cave that was like a great reverb chamber." It was Arlin who encouraged Geoff to try out as the singer of his band.

Though Geoff's first experience in a band was very positive, he still was not considering the world of professional music. Instead, it gave him the desire to personally create music he could later use in work with church youth groups. With this in mind, Geoff proceeded to make a demo with a few of his friends. With the help of Billy Smiley and Mark Gersmehl (now of White Heart), Geoff recorded a four song EP in two days.

After graduation, Geoff and his bride, Jan, moved to Corsicana, Texas, to work in one of the family's plants. It wasn't long before the pull of God toward Christian music found them moving to Nashville. After months of living in Nashville, working as a salesman in a men's clothing store and singing on demos, Geoff landed a contract with Benson's Power Disc Records, with which he recorded his first three albums of "straight-ahead" Christian rock: 'Where Are The Other Nine?' in 1983, 'Over The Edge'(1986) and 'The Distance' (1987).

Geoff signed with Sparrow in 1988 and recorded two albums. It was the next record company move that proved most significant however. In 1990 Geoff began utilising the name The Distance for his regular recording and touring unit. The band's debut album 'Pure And Simple' for Forefront sold quite well but with the second 'A Friend Luke U' (1992) sales went through the roof and Geoff Moore And The Distance's punchy brand of pop rock became a staple of US Christian radio. Subsequently 'Evolution' (1993), with its laudable lampoon of the implausibility of the theory of evolution, became an even larger US hit (tracks from it even being taken for a dance remix EP). Now the band's new album 'Home Run' is off and selling featuring as it does lots of well crafted, radio-friendly songs.

I spoke with Geoff a couple of months after the release of 'Home Run' in Europe.

You performed in the Netherlands in the mid '80s. It has been quite a long time since that visit. Could you please indicate your change during that period?
"When we got to Flevo the first time, I was working with Benson. I feel I really found my home as far as record labels go, with Forefront where I've been now for the last five years. I had been making pretty much roots based music, that is pretty much our style and I continued in that vein but brought in some more pop music elements. That really broadened our market place. The second album I did at Forefront, 'A Friend Like U', sold more than the first five previous albums I had done combined! So it really became a time of growth for us. That success afforded us the opportunity to take a little more time to record albums and become a little more focussed in musical style. That was a big turning point.

"In the very early days when we did our concerts, we really tried to be just passionate, honest and play from our hearts and sing about things we felt were relevant in day to day life, but under the gaze of our relationship with Jesus Christ. So part of it is defining our music and reaching a broader audience, the other part is just sticking to our guns and play our hearts out, whether it is for 10 or 10,000s."

You've played with The Distance consistently over the years. Was finding them a major turning point for you as well?
"Yes, absolutely! I decided to make the band part of what we're doing, partly because when I first started I did some singing with background music tracks and pre-recorded music that I would sing along with. I hated it! I just felt like it wasn't live, it wasn't spontaneous. So I brought this group of guys together that really became the springboard for our music, growing, becoming more spontaneous. They are some of my dearest friends in the world, have a real common vision for why this is. When you play the songs two or three hundred times, the glitter kind of peels off, and you get down to the basics of why we are doing it. The camaraderie of the four guys who travel with me is very important. We really believe that we are honouring our Creator by playing music that talks about him and which carries a message that changes people's lives. It's a great vocation, we're really proud of it. The Distance are definitely a big part of performing this music that's caused us to reach a larger audience."

When did you start to find out and when did you discover that this was your calling?
"It is kind of difficult. I grew up in a very non-musical environment. I grew up in a home where athletics, sports were really emphasised. It seems like, I can imagine this would be different in Europe. Here in the United States, it seems like families tend to lean either towards the arts, or to athletics. So that was mine, I played baseball, football, basketball, didn't take any music lessons, but I was a very avid listener of secular rock 'n' roll. Loved it. It was a big part of my identity.

"I became a Christian as a young boy. I had a feeling I was compromising, as the lyrics I listened to, had nothing to do with being a Christian. When I heard Christian music for the first time when I was in college, it just really inspired me; I loved the sound of it, hearing about my faith. It was from there, my roommate was in a little band in college and they had asked me to sit in with them a couple of times, just goofing around and I really took a liking to it. I was at the university and began to get a very strong desire to sing and to share the Gospel with people who would listen.

"I guess it was a culmination of prayer, through studying God's word, through taking the counsel of Christian friends and a bunch of people that I put myself under accountability too. And finally that gut feeling, why had God put this desire in my heart. All these kinds of feelings working together. I knew I would be risking missing God's plan if I didn't try it. So taking that initial step of faith was the tough one and then confirmations came in a thousand different ways after that."