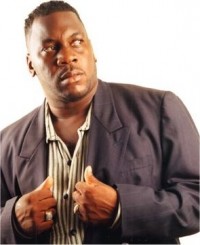 One of the more intriguing acts set to play at this year Oraclez Gospel Festival at Wembley Arena is a singer, not from the star-studded American gospel world but from the mainstream reggae scene of Jamaica. For decades singer, songwriter, record producer and label owner George Nooks has been a fixture in JA reggae music. In the '70s he was a reggae hitmaker recording six albums under the name Prince Mohammed, though it was after George reverted to his own name and began peppering his albums with gospel songs that he came to the attention of gospel reggae enthusiasts. In 2002 Nooks recorded "God Is Standing By", a cover of an old Ben E King song, which became a major hit in Jamaica, being named by The Star newspaper as Record Of The Year. More recently Nooks' contributions to the very popular 'Reggae Sunday Service' series of samplers (including his hit rendition of the hymn evergreen "How Great Thou Art") have kept the singer in the public eye.

Cross Rhythms' Jon Bellamy recently spoke to the reggae veteran and began by asking what George felt like to be asked to play at Wembley alongside such luminaries as BeBe And CeCe Winans and Faith Hill. "I was elated, it felt great. It'll be a pleasure to work with these well-known gospel artists. It's a tremendous feeling to be sharing a bill with these guys. I'm looking forward to seeing all the fans and people who don't know of me yet. I'm coming over with a band and it'll be a great show. The UK is like my second home, I love to come over and perform for my British fans."

Finding fame as a mainstream reggae artist, has George played many gospel events in the past? "I haven't done many gospel shows but I sing in churches. I've done a few but I'd love to do more."

Born in 1958 in Kingston, Jamaica and raised in the parish of St Andrew, Nooks developed a passion for singing in the youth choir of his local church. "I come from a very religious background and the church choir invited me to sing, the response I got was great. From there I started singing in the school, then talent shows then the recording studio!"

George won recording contracts with producers Chinna Smith and Dennis Brown but the tracks recorded did not make an impact on the charts. Success came later when in 1977 Nooks released "Forty Leg Dread" under the name Prince Mohammed and "Tribal War" (inspired by the increasing violence in Kingston) as George Nooks. Both songs simultaneously became Jamaican chart hits.

"Why the pseudonym?" enquired Jon. "The name Prince Mohammed came from one of the producers I was working with at the time, Joe Gibbs, a very famous producer here in Jamaica. He gave me that name because I sing and I deejay and he thought that I did both so well that he wanted to make people think that I was two different people!"

George's self-titled album, released in 1997, contained the hit singles "Real Men" and "One Of A Kind Love Affair" and earned the artist three Tamika Reggae Music awards for Crossover Artist, Outstanding Male Artist and Vocalist Of The Year. George travelled to the US to collect the awards but the Immigration And Naturalization Service decided Nooks was visiting the States illegally and had the singer deported! George's wife and three children were forced to accept the awards.

Reggae music is, of course, known for its links to Rastafarianism. Does George find it difficult being a Christian amongst his contemporaries? "Kind of yeah, but here in Jamaica even the Rastafarian background is coming from the Church. Here we have lots of churches, everywhere you go a church is on the corner. Every Rastafarian knows that his family, his mother, his grandmother or his great grandmother are from the Church. So we're definitely not that far apart, you know."

One of George's best-loved songs is his recording of "How Great Thou Art". How did the reggae star come to record the old hymn? "I was always singing that one in church," said Nooks. "That was something I wanted to do for my own sake, for the Church's sake. Everybody in church knows that song and I wanted to bring out the reggae feel of it."

Nooks explained that the ideas for his lyrics come "from the life that I live" and he covers classic songs because "you have great songs that have been written and the younger generation don't know them. I like to share it with them."

So what is it like to be a Christian living in Jamaica? "Well, it is very difficult at times. The crime rate here is increasing and you'd like to see everybody walking with God. But we all know people turn their backs on good things, we just hope and pray that things will get better each day and we leave it up to God."

I loved George nooks songs especially donât bother worry and ride out the storm.i have some hideous enemies so I have to always carry Jesus with me all the time every time

Thank you so much for this article on George Nooks ( i call him Nooksie). What a Great singer and a Great human being? I play "Giving Thanks" in my car over and over. Always I get goose bumps and a sense of Gods presence when I listen and sing along to the songs.
George's version of "How Great Thou Art" is the Best ever. I would love to see George in concert one day, that's on my "to do" list.
I wish George and his family all the very best in life and I wish you well Tim, and continue your good works.

Thank you for this article. I am so, so proud of George Nooks and I love him to bits. I play his album Giving Thanks over and over in my car. I sing out loud with him. I would love to see him in concert. I did't know George is the same Prince Mohamed of my youth. Thanks to you I now know much more about the Great man. May God continue to bless him and keep him safe and the same for you.
Yvonne