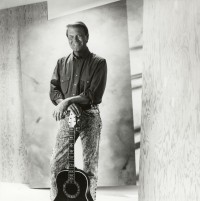 Glen Campbell has kept his seat even after nearly three decades on the recording industry roller coaster. It has taken him from the highs of stardom to the pits of depression. Since leaving the down-to-earth life on his family's Arkansas farm he has learned a few truths about life including where the ride was taking him.

The bright lights of the big city have lost some of their sparkle these days. At least for Glen Campbell they have. They were eclipsed when the Light of the World came into his life during a very dark period.

"Christ has delivered me from all the evil I was in" he says. "I'm happier now than ever in my life."

Campbell, the seventh son of a seventh son, was perhaps destined to become one of the Lord's 'prodigals' eventually but the path was certainly not straight and level. Rather, it was littered with broken bottles and broken relationships. But not with broken dreams of stardom - for a start he had become one of the most established names in the recording industry but also, he says, he never had dreams of stardom.

"I never set out to achieve stardom, I guess it kinda came with the job. I just set out to try to sing and play guitar as best as I could, I've really enjoyed doing that. But I'm enjoying it better now than ever in my life, even on stage.

"I'm not now under the influence of drugs and whiskey. That really makes a big difference. I've got my full faculties with me now."

Glen Campbell would not describe himself as a Rhinestone Cowboy. He likes to work in "comfortable clothes" rather than sequins and rhinestones - as a country singer he's a different breed altogether.

"I'm not a country singer per se, I'm a country boy who sings," he once told an interviewer.

Maybe that explains how he was able to find some middle ground between country and pop, carving out a unique niche in the world of music and a popularity that spans the globe.

Home today for Campbell is way out west in the cowboy country of Phoenix Arizona with its beautiful dry climate. It's not central for the showbiz mainstream compared to Nashville, L.A. or New York, but airport-wise he can get anywhere in the world without worry.

Phoenix, holds a special place in his heart, "By The Time I Get to Phoenix" was his first major hit. Another milestone in his life was his marriage to the former Kimberly Diane Wollen in that city. And so, in a different sense, the name of the city is special, for it is here that he followed the example of the legendary Egyptian bird and rose from the ashes of despair.

Although a southerner by birth, he says the only thing he misses about those "southern nights" (the title of another hit) is the mosquitoes.

Arkansas is said to have some of the whitest cotton in the South, along with a strong tradition of country music and Campbell is the cream of the crop of country artists to come from that part of the States.

He first learned to play on the family guitar. Then, when he was four, his parents gave him one of his own - a five-dollar model selected from the Sears & Roebuck catalogue. Since he didn't read music, he learned whatever he could from wherever he could, first from his family and his uncle, later by listening to Django Reinhardt, Barney Kessel and even a few horn players. He practiced his singing in the local church. 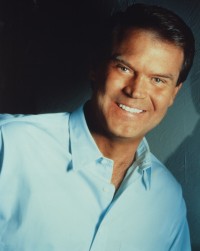 His parents, Wesley and Carrie, devout members of the Church of Christ, instilled in their children a thorough respect for the old-fashioned values. Glen still respects those values and from these sprang his desire to perform gospel music.

"I guess each one of us during some part of our lifetime has a personal, somewhat secret, ambition that he hopes someday to fulfill. My own goal had its beginning years ago when my career was just starting to flourish. I promised myself that if all went well I would record an inspirational album in which I chose all the selections myself."

His recording career took off in the early 60s and during the past two and a half decades his gift has been used to bring listening pleasure to generations - even his oldest albums hold up well, "I like good lyrics. Without that a song's got nothing real positive. You might as well play an instrumental. Nowadays I look for good philosophy songs," he said.

Recently Campbell has been more active in gospel music both in recordings and in meetings with the likes of the evangelist, James Robinson.

"I love singing gospel music and hymns. Being a Christian I love to tell people about Christ and what he's done for me and can do for them."

His latest gospel album is of classic hymns. Asked what he'd say to those who think them outdated he jokingly replied, "Well, I updated them! They're as update and as good as any music I've ever done."

Glen Campbell's new found expression of his Christian faith stems from both an evolutionary progress in his life and also a sudden dramatic experience.

"I quit drinking about three years ago. Everything's been marvelous since. Jesus Christ promised that his yoke would be easy and light, and it is. He's taken all the burden of my guilt and worry off my shoulders. Those things drag me down."

Being in Phoenix - away from the pitfalls of the show-biz industry - helps. "I'm in a real good church in the North Phoenix Baptist Church. It's got an orchestra with strings and a 300-piece choir. It really satisfies my desire to sing with a big choir...it's a great thrill getting to do that about once a month."

A most impressive gospel song with a potential to be an 'evergreen' recorded by the likes of George Hamilton IV and George Beverly Shea is "Less of Me". It speaks a lot of good sense - "I was on the road with the Beach Boys playing bass and singing the high parts. We stopped in a radio station in Canton, Ohio. There I saw the words on the bulletin board and wrote the song from that."

Campbell has recorded more than 45 albums, "and I hope to record some more too!" he says. "My latest album is being produced by Jimmy Bowen. We're back together now after 20 years and I'm back on Capital Records.

"It's a coming home for me. Joining me on the album are many Nashville friends on a song called "Most of All You've Got to Keep Jesus on Your Mind."

Hugely successful as an instrumentalist, singer, songwriter and actor, it is hard to imagine that Glen has any more hills to conquer or ambitions to fulfill. But he has! I wanna win the Bing Crosby National Pro Am of Pebble Beach... I love golf. If they give me enough shots and a high enough handicap I could win it!

But back to the topic at hand he continued, "I've been extremely successful in my career. And, what's more, I've been blessed with a wonderful family and friends. But I know that it wouldn't have happened if the good Lord had not wanted it to.
"I'm very grateful for all that I have, and want to give the Lord the thanks he deserves."

The opinions expressed in this article are not necessarily those held by Cross Rhythms. Any expressed views were accurate at the time of publishing but may or may not reflect the views of the individuals concerned at a later date.
About Paul Davis
Paul Davis is a hugely experienced British journalist who in the '70s launched the UK's first Christian music magazine.

Glen Campbell is one of my favorite
artist..I've Always Loved his
music..He's one of the greats..
I'm so happy to learn that he turned back
to Our Lord & Savior Jesus Christ..
I'm so saddened to hear of his illness..
Such a cruel disease..
God Bless You Glen Campbell..

I am very happy to learn that Glen Campbell became a Christian by trusting Christ as his Savior. I'm sorry to hear of Glen's illness and I'll be praying for him and his family. My wife just went to be with the Lord a few weeks ago so I know what that loss is like. PAU

I grew up in arkansas and married into a family from Delight. My wifes uncle had grown up with Glen and he was not impressed with Glens guitar ability up to age 16 before he moved out west. When I came to the Lord, I heard a preacher say that he had prayed fervantly for Johnny Cash, then heard that he got saved. So I began to pray for Glen, and after weeks and weeks I heard that Glen was going to make a Christian album. So I rejoiced in the goodness of God to give me the news which I took as an answer to prayer. This was back in the early eighties.

I have been a "fan" of Glen Campbell's since the 1960's and am so glad that he turned his life around and became a Christian. His music has touched my soul in so many ways. I pray for him daily.

My age is 65 this year September 4. I have enjoyed Glenn Campbell's music all these years. But right now I really enjoy his turn back to his faith. I have bought the album Jesus and me. I bought this about 16 years ago. And love the songs on it. I wish the best for Glen Campbell. I have heard he has Alzheimer's these days.
He has got to be one of the best. Thank you for the capability of commenting.