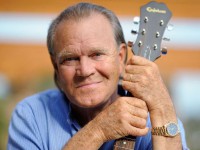 HAVING contracted Alzheimers in 2011 and subsequently undertaking a worldwide Goodbye Tour, country and pop star Glen Campbell has released his final album 'Adios' and seen it go into the US and British charts. The project is described by Rolling Stone magazine as "a loving selection of hand-picked songs mostly comprised of personal favourites."