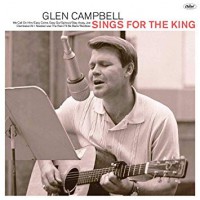 18 PREVIOUSLY unreleased recordings, originally made by the late Glen Campbell as demos for songwriters Sid Wayne and Ben Weisman for submission to Elvis Presley, have been issued on a new CD and vinyl album, 'Glen Campbell Sings For The King'. Read part of a review in Mojo magazine, "One song 'All I Needed Was The Rain' sounds as if it might have utilised an 'Ode To Billie Joe' backing track, while Elvis himself turns up electronically to duet with Campbell on the gospel track 'We Call On Him', possibly providing a well-earned seal of approval."