Prior to sending the crowd delirious at Greenbelt '96 with their pumping brand of Jayhawks-style rock, Lancashire's GOOD SONS were grilled by Sammy Horner. 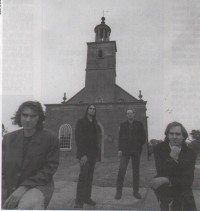 Rolling Stone magazine says that their songs would do Bruce Springsteen proud and other mainstream mags are singing the praises of the Good Sons Glitterhouse album 'Singing The Glory Down'. The band rose from the ashes of the fondly remembered Brit country outfit the Stormkeepers. The Good Sons' style treads the same dusty highways and borrows from the same musical roots as The Band, Green On Red and, most recently, the Jayhawks and Soul Asylum.

Between them, the four band members have been involved in the production of many albums and toured the UK and Europe on numerous occasions. They have shared the bill with, amongst others, Del Amitri, the Pogues, Michelle Shocked, Bob Geldof, Runrig and Steve Earle and made a number of TV and radio appearances including the James Whale show Nighthawks on RTE Dublin, sessions on both Radio 1 and Radio 2, and the Mary Costello Show for GLR (Greater London Radio). Festival wise, they've been busy too, including a set before 15,000 people at Greenbelt and 10,000 people at the Heineken Festivals in Preston and Sheffield. As mentioned, the media love them. Their album, 'Singing The Glory Down', was released to critical acclaim in November last year. Rolling Stone magazine made it their album of the month. Country Music International declared it to be "achingly tuneful country rock that doesn't sound forced or unconvincing." And the Aberdeen Evening Express murmured, "Michael Weston King has the kind of goosebump inducing voice that sounds as if it has been marinated in good bourbon and dunked in honey." Oh yes, and their second album, the acoustic 'The King's Highway' released last July is also on their playlist.

Michael Weston King began by commenting on the media and fan attention the Good Sons have been getting. "It's been going really well," says Mr Weston King (in his English accent, not American as you might expect after seeing the album cover and hearing some of the songs). "The album has been well received and the live gigs have been working out fine."

Sammy: How come you've ended up on a German label?
Good Sons: "It was just a label that I was aware of. I really liked the kind of artists that they had on their roster, people like Peter Case and Butch Hancock and we just felt that they might be able to really help our kind of music along.

Actually, it's been funny how things have worked out. When the Stormkeepers split, Gary Hall decided to sign to an Irish singer/songwriter label called Round Tower, and now Round Tower have taken on the promo for Glitterhouse artists in the UK. In a sense Gary and myself are still going out through the same channels!"

Sammy: Do they insist on a lot of promo work and touring?
Good Sons: "No. In fact, I probably give them more hassle than they give us. I'd like to play a lot more in places like Germany."

Sammy: A number of magazine reviews (including CR) have put the band in a New Country pigeonhole, yet the marketing seems to push you more as a pop/rock outfit. How do you feel about that?
Good Sons: "Well, it only bothers me in that I think it might narrow the appeal and potential audience of the band. We aren't just a New Country band. I think we do more than that. Also, some people will be completely turned off if they think a band plays purely country music. I do like country music, but I think the Good Sons are more than just a country band."

Sammy: You have been getting attention on things like Billboard's country playlist and Country Music International and you've been playing a lot of the country festivals. Are you worried that you might get a country following?
Good Sons: "No, I don't mind if people who are into country are into us, it's just that I would like to think that we appeal to a wider group...and if our live shows are anything to go by then I think that is the case."

Sammy: You managed to get Townes Van Zandt on The King's Highway'. What was he like to work with?

"He is an amazing guy. He's like Willie Nelson or someone of that experience and quality. I will be doing an acoustic tour with him this summer - I'm really looking forward to that. You can learn a lot from a guy like him."

Sammy: Some reviews mention that your songs are "gospel tinged" or hint at a spirituality in them. Does that bother you since you are largely aiming at the mainstream market?
Good Sons: "No, not at all. I write about how I see things and as a Christian I see things from a Christian perspective. That doesn't mean that I am always writing about what you might term 'Christian themes' but it does mean that I see life from a particular perspective. I don't see why that should be a problem for anyone. I'm just honest about what I write."

Sammy: What about the future?
Good Sons: "We will be doing an acoustic project soon and some more touring. We are managing to get around Europe a fair bit and of course UK gigs are very much on the agenda. Phil and I will be doing some acoustic work on the back of the new album and we have a Christmas show in December at the Borderline in London.