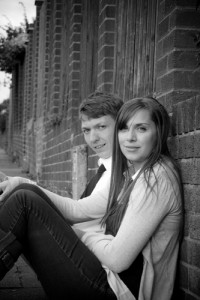 One of the long established parts of the UK Christian music scene is Nexus, the college, based in Coventry, for training Christian musicians. Originally called the Academy Of Music Ministry, down the years Nexus has produced a stream of bands and worship leaders, of which the best known, [dweeb], are currently poised for international breakthrough. Two of the staff at Nexus are husband and wife team Heather and Trevor Flynn who at the end of last year released a much praised worship orientated project, 'Heather & Trevor'. Despite their Nexus credentials, Heather and Trevor are Americans.

Heather spoke to Mike Rimmer on Mike's Rimmerama programme. "We met in Michigan where Trevor grew up and I moved to when I was about 16. We met playing worship at the church. We started university in the same year and got to know each other. We did date for a few years and then we decided to go to Visible School, the Christian arts college in Memphis. We weren't even dating when we did that."

At Visible School Trevor had dreams of becoming a Christian rock star but after a season came to recognise that God had other plans. He said, "I knew that the rock sort of thing wasn't really on the cards for me but we really had a passion for worship music. As much as four or five years ago I couldn't have written a worship song. I couldn't have put pen to paper and actually looked at that and gone that's great! Something's changed and it started with one song and then another and then it just became something that we really enjoyed doing."

Heather and Trevor married when they finished at Visible School. Then Trevor was offered a job at Nexus and the couple daringly relocated to Coventry in 2006. Trevor taught recording technology and Heather began working at Nexus in administration. But the desire to make their own music was something they couldn't shake off. Said Heather, "We'd been writing songs together for years and didn't really start along the worship route. As we were playing more and more in church God was turning our hearts more towards that kind of music and that expression. We had a collection of songs and Trevor started doing his Masters this last year, Sound and Music Technology, and basically his final project was to record and master an album." Using the top rate recording facilities at the University of Hertfordshire and bringing in musician friends like Rich Hall (guitar), Anthony Hippsley and Sam Skirrow (bass), Jonathan Lombana (drums) and Luke Richardson (keys), the album emerged and soon caught the ears of the critics. Cross Rhythms reviewer Kim Cleaton wrote, "The album demonstrates good writing ability and some top rate vocals from Heather which at times resemble Leigh Nash."

The duo refer to the album as 'The Glory' LP though early runs of the sleeve don't show that on the front. One of the outstanding tracks on the project is "Captivated". Said Heather, "'Captivated' is one of the more personal ones. It's more of a love song really to God; looking at his character and catching a glimpse and being captivated by that beauty that supersedes any other form of beauty that we've seen."

Heather and Trevor are not just good musicians, they are great people! So loving and caring! Listen to their music and get Captivated!