Helen Jayne McKellar: Her best ever recording after 28 years of music making

Tony: All the original songs on 'The Last Minute' were, I believe, written in 2017.

Helen: Yes, all of the songs were "given to me" at the piano in early 2017 and it was obvious they were cohesive in their message and I knew I had to do something with them. I was in a difficult place initially, after having had two very worrying medical scares over a six month period, so that influenced the tone of the songs. I drew from a lot of stuff that had gone on in my past and up to the recent times of suffering. I have been authentic and true to myself and the Lord throughout the process. I find more than anything people don't want to know what faith we are but whether or not we're genuine. I can honestly say this EP is written with a genuine heart for people and for God and I'm relieved and very happy with the outcome. I have had a few negative comments and people questioning whether I am still a Christian, which I can't pretend doesn't hurt, but it's something that I'm learning to ignore because the Lord knows my heart. 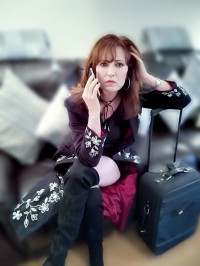 I've never been, nor wanted to be the sort of songwriter who gets up in the morning and thinks, "Oh, I'll write a song today about this or that." I know there are plenty who do and that's fine for them, but it doesn't work for me - unless I'm inspired in some way I can't write. That's not to say all my songs are autobiographical though; of course you sometimes invent a scene or a story, and draw upon your experience and the experiences of those close to you to make it real. That's true of most of the songs on this EP.

My songwriting and singing is truly a gift from God, but just as a Christian architect doesn't only design churches but also houses, shops and schools, I craft songs about life. I think we're allowed to enjoy our gifts as well as using them to help others. There has to be a balance.

Tony: Do you still play any live concerts?

Helen: I haven't played live for several years now due to my condition which is ME/CFS which for some reason I still endure 23 years on. It's a long time to be unwell. I still battle with periods of depression and anxiety because of it. The last gig/live performance I did was in 2015 at the funeral of my dear friend who died of breast cancer. It took all my courage to get up and sing live to an audience of a few hundred. Her request was that I sing Eva Cassidy's version of "Fields Of Gold". I knew that if I got emotional I wouldn't get through the song so it was a big challenge to honour her and I sang my heart out. . . it was a precious moment.

In the past, I have sometimes found performing to be a lonely experience, as it would usually be just me on the stage with backing tracks and afterwards meeting the audiences and praying with individual people when sometimes I didn't have any back up. A lot of the time it was just myself and Doug. I became exhausted and unwell because we didn't have the practical support we needed and just did the best we could with the knowledge and integrity we had. We played some massive gigs. Some of my happiest memories were playing Alton Towers, Kelvin Hall Sports Centre Glasgow and London's Shepherd's Bush Empire, Bournemouth International conference centre and a wonderful concert at The Nordic House, TÃ³rshavn in the Faroe Islands, not forgetting several concerts and TV appearances both in the UK and USA. And of course Cross Rhythms festivals when at one festival I distinctly remember you, Tony, suffering with a sore throat and trying to cool it down with an ice cream in hand and introducing me on stage! We had a little joke at that point. To be honest, I'm not sure what the future holds regarding gigging my music; it takes a lot of energy, energy I don't currently have, unless a miracle happens. I'm asking God to show me what he wants of me. If I got strong enough, I would hire a band to perform with me this time. It's so much more interesting for the audience. As well as the tracks on this EP I have a number of other new tracks too, not yet recorded, which I'm really excited about plus my back catalogue, so if I do get back on stage it could be an exciting, varied show. But I need a lot of prayer for better health and I honestly do not know yet if it is God's will. I look back at some of the TV work I did years ago and wonder how on earth that happened and whether that will ever happen again. My times are in his hands completely.

Tony: Tell me something about your life or your music or anything else which hasn't been covered by these questions.

Helen: The path that I am on I wholeheartedly believe God chose for me, it has taken me in a different direction to CCM. It would have been a far easier option to bring out a worship album and had a readymade audience in the Church and that could have taken off. But my heart wouldn't have been in it at this time in my life. God definitely directed this project from start to finish and I believe there is a purpose for it. Maybe one day I will record a worship album and write a book about my experience in the music industry, but for now I'm contented knowing that I'm in the Lord's will.

Some random things about me - I love being next to nature, garden birds, wildlife. Country walks, walks by the coast. I love photography, capturing nature. I love creating/pottering in my garden. I live a quieter life now. I guard my privacy. I would like to think other people would sing my songs one day after I am gone and that my recordings are a legacy for future generations. Unfortunately, due to ill health, I have not given birth in the natural sense. It made me sad for years that although happily married I would never be a mother. You hear people in the industry equating making a record with "giving birth" because it is an exciting but very painful process. I'm not sure it is a fair comparison but for me this is my fourth "baby"/complete record. So it gives me some consolation that we have "given birth" to something creative and that does give me a real sense of purpose. An ex-Polydor head of promotions recently told me that if Adele had released this EP it would be at the top of the charts by now. But because of ill health I have been unable to gig or promote like other artists over the years so I am just making the most of every opportunity that comes my way. Certainly the radio stations are picking up on it and that gives me a lot of hope for getting the 'Last Minute' EP out there to a wider audience. It is also available to download from Amazon, iTunes, Spotify and CDBaby.