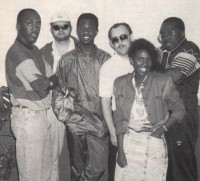 It was 1989 and I was struggling to make a living in media working with an extremely short-lived Christian radio ministry called Network Eleven. Then one day I got a phone call from Dave Roberts. Today, Dave is a highly respected church leader and author of books but back then he was scratching a living writing articles for Christian magazines and doing some kind of consultancy work with Kingsway Music. Dave had a revolutionary idea - recording some Christian dance music. The UK music scene was awash with the sounds of rave and house music and as usual the British Church had completely failed to notice this musical revolution. There was absolutely no gospel dance music being recorded anywhere and the way Dave saw it we two impoverished journalists could do something about it, namely record some tracks which Kingsway could then press onto 12 inch vinyl. Dave knew that I had produced some records in the past and, equally important, might be able to scrounge a bit of studio time in the Walsall studio complex Big Feet Media that was also housing Network Eleven. There were snags - like finding a bunch of musicians prepared to play for nothing save maybe a train fare - but Dave knew I'd go for it, even with Dave's insistence that we adopt the rather silly pseudonyms of Levi (Roberts) and Top Cat ("TC", ie, me).

Dave was full of ideas for the project. One was that one of the tracks should be a rap version of Larry Norman's "Why Don't You Look Into Jesus". Another was that at least one other track should feature sampled extracts of preachers. Even the name House Of God was his idea.

And so it came to pass that one cold weekend in Walsall we gathered to make the three tracks we felt that at a push we could record and mix in a weekend. I'm no technician (if anything, I'm a technophobe) so essential to the mysterious world of samples and 16 track recording desks was Big Feet Media's Kevin Edwards, a talented engineer/producer who was later to produce Sammy Horner's successful 'Celtic Praise' album and become a member of the short-lived mainstream dance act Minds Of Men (Atlantic Records).

The first thing we did was listen to the bunch of preaching cassettes I'd brought with me and decide which of them had extracts that might work over a dance groove. Reflecting my eclectic theological pursuits they ranged from black preachers (Rev C L Franklin - Aretha's dad) to much respected fathers of the Church (Martyn Lloyd Jones) to Spring Harvest favourites (Tony Campolo and Clive Calver).

The first track we recorded, "Say Yes", used a sample of Dr Billy Graham exhorting a throng to "say yes to Jesus Christ". We had it doing that stuttering effect that Paul Hardcastle had taken into the charts (you know, "Ni-ni-ni-nineteen") which sounds naff today but seemed cutting edge at the time. Most of the keyboard groove was provided by Steve Elliott (a non-Christian keyboard player Kevin knew and, as far as I remember, the only contributor to be paid anything). In retrospect the groove was too slow ever to become a floor filler but I was persuaded by Lee Allen, a lad doing a week's work experience with Big Feet and supposedly a "house music expert", that slower grooves, rather than the galloping rave tempos, were coming in in clubland. For the vocal hook for "Say Yes" I'd asked Velveta McGregor to come and sing. Velveta was soon to marry Steve Thompson and made a name for herself working on various Graham Kendrick albums and helping her husband lead worship but back then she was just one of the bevy of Christian singers and musicians who lived in the Midlands and gravitated to Big Feet.

Velveta also sang on the next song, "House In Order", which was loosely based on the old gospel song once chosen by the Edwin Hawkins Singers as the followup to "Oh Happy Day". You know the one - "Come and go with me to my Father's house". Underlining the "house" connection seemed important at the time. For the choir sample, Duke Kerr (who was playing keys on the session along with Steve Elliott) persuaded some of the members of the Walsall-based choir with whom he played, the Remission Choir, to come over and quickly sing a line.

The third track, Larry's beloved "Why Don't You Look Into Jesus", was the most challenging to organise. For a start there weren't any gospel rappers in the UK. Finally, I heard about Dale Prime and Elliot Mackenzie, two black students living in London who'd performed once of twice as D & E and, though they probably didn't know it, were Britain's first gospel rappers. So they came up on the Sunday to rap Larry's immortal lines ("Gonorrhea on Valentine's Day/You're still looking for a perfect lay") which, on Dave's, sorry, Levi's, suggestion we changed "gonorrhea" to "HIV positive". Larry's brilliant lyric wasn't long enough when rapped so I wrote a bit more and when D & E came to rap it, it still was a bit short so they added some couplets of their own. I got Christine Mohabir, who was working at Network Eleven at the time, to sing the vocal hook and then "Why Don't You Look Into Jesus/D & E Rap (Medley) and the other two tracks were quickly copied onto a DAT tape for Dave Roberts to deliver to Kingsway. While D&E were waiting in Big Feet's reception for their mini-cab to arrive I quickly assembled most of the House Of God participants for a photo to be taken and, in a sad attempt to hide the fact that middle aged baldies didn't look right in a dance act, borrowed some shades and a baseball cap.

When Kingsway released House Of God's "Say Yes" I was disappointed. Even though Kingsway hadn't shelled out a penny to receive the master, they decided a 12 inch single release was still too much outlay so they released it solely as a cassette (the same three tracks on both sides). The wrong format for club-orientated music, but such are the ways of record companies. Consequently "Say Yes" didn't sell too many though one shop in Soho, London, the pioneering Duel Edge, sold dozens and dozens of copies by the simple device of playing it loud on their sound system with the doors open. They told me that as a result many passers by came in and bought copies.

The one brief moment of promotion came when House Of God were asked to come and play at Greenbelt and perform the song in Pip Wilson's roudy youth culture marquee. Kevin Edwards brought the backing track of "Say Yes (To Jesus)", complete with its Billy Graham samples and Velveta sang the track to a highly appreciative pumped up crowd. She got it a bit wrong (with dance music it's vital for the singer to count the riffs so they know where to come in) but nobody seemed to notice. There was even a press conference in a Greenbelt porta cabin where Levi and Top Cat pontificated about the need for the Church to engage with dance music culture. I was subsequently quoted in the staid Christian Music magazine calling the music "a solid groove".

Three more memories about the pioneering House Of God cassette stay with me. Memory one was a conversation I had with Manchester production maestro Zarc Porter who, as any follower of Christian dance music will tell you, produced all those electrifying floor fillers with The World Wide Message Tribe. Zarc told me that though he agreed that the House Of God project was too slow to get many feet moving the whole idea of using dance rhythms, sampled preachers and rappers was "a big influence" on what the fledgling studio man was soon to do with the Tribe. That was hugely encouraging for me.

Memory number two was when, at a subsequent Greenbelt, I very nervously passed on to Larry Norman a copy of the House Of God cassette. I had no idea about what he'd think of the radical makeover of "Why Don't You Look Into Jesus", particularly when under a strict interpretation of copyright law I should have gotten permission from Larry and his music publishers before altering (and adding to) his lyrics. To my extreme relief Larry told me he really liked what House Of God/D&E had done with his song.

My third memory was about a letter I received almost a year after Kingsway had issued the cassette. At the time of the 'Say Yes' release I'd written to all the preachers involved (well, those who were still alive!), sending them a copy of the tape with a polite letter saying I hoped they had no objection. The responses I got back were encouraging. Tony Campolo (whose classic "Book of Acts, baby, book of Acts" was my favourite sample) loved it. But then, out of the blue, I got a letter from an American solicitor, acting on behalf of Dr Billy Graham. He demanded that the cassette be immediately withdrawn from sale! I was crestfallen and for a few days was spending considerable time in prayer. I believe the Lord gave me an appropriate response. I wrote back to the solicitor and told him that if he would give me some evidence that this instruction had come directly from Dr Graham himself I would immediately take steps to withdraw 'Say Yes' from sale. I never heard from the solicitor again.

l got my still and play it would like to copy onto disc then mix it up by pitching it faster it true now ..true still sound sgood
Alos Tony did this ace break down of the chart and a commentry at greenbelt around how we listen to music do you recall

be bless sir , for all u have done to promote gospel music , GOD bless u and your family