Isabel Baker: How her one and only album sells for Â£200 plus 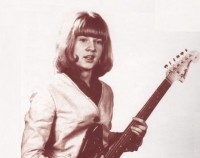 One of the strangest phenomena in today's music scene is the emergence of record collectors prepared to pay hundreds even thousands of pounds for certain records that they consider "collectible". There are many different types of these record collectors. There are those who search for records by the Beatles, Led Zeppelin and hundreds more on rare overseas pressings, unreleased demos and even records with misprinted labels or sleeves. Then there are Northern Soul enthusiasts and deejays prepared to pay vast sums for soul records with a fast rhythm whose initial 45 release got close to zero sales. And then there are collectors of a particular musical subgenre - such as '60s psychedelia or old school heavy metal - keen to search out the obscurest releases of their chosen musical subgroup and pay big money to do so.

Christian music and gospel has not escaped the attention of these fanatical record collectors and be it a Blind Willie Johnson 78 or a sought after album by Britain's Hendrix-inspired Out Of Darkness, there are a small but growing number of recordings by Christian artists which - if they're in near mint condition and on the original label - will sell for serious money.

This is what has happened to the independent vinyl album 'I Like God's Style' by Isabel Baker, copies of which have sold for more than Â£200. Rockabilly collectors, having uncovered the output of the '50s pioneers who put a rock 'n' roll beat to country music, have for decades now searched the thrift shops, car boot sales and eBay auctions looking for rockabilly recordings. It was these collectors who first stumbled across 'I Like God's Style'. Ironically, it is stretching it to call the album rockabilly or rockabilly gospel. The drums on this release are largely inaudible and side two features mainly slow songs so that raw country gospel would be a better description. Yet the album's cover photo, featuring as it does the 16 year old singer clutching a Fender Jaguar electric guitar, and the raw passion with which she belts out her 12 self-written songs about the Lord, was enough to hook those searching for rockabilly obscurities.

In 2015, Harkit Records - a re-issue label which largely specialised in film and TV soundtrack albums but who also put out occasional vinyl re-issues by artists like the Chiffons - re-issued 'I Like God's Style' and with a sleeve note by Dutch musician and journalist Freek Kinkelaar, it was an intriguing glimpse into an obscure corner of country gospel history. Thanks to an interview Kinkelaar conducted with jazz musician Joe Utterback, who happened to organise the two-day recording session booked by Isabel's evangelist parents, a little information about the mysterious Ms Baker has come to light. 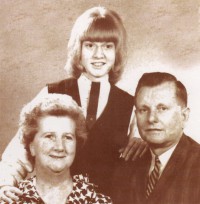 George E F Baker was an evangelist who, under the auspices of his The Challenge Of Calvary Ministry Inc, toured churches in California and the Midwest preaching the Gospel. Mr and Mrs Baker's daughter was gifted in music and wrote her own gospel songs, mostly with a distinct country feel. The purple prose of one Naomi E Fieldstad on the original 'I Like God's Style' sleeve gushed, "Knowing Isable [sic] is only sixteen years old with her deep consecrated life is an inspiration in itself. Her emphatic delivery both in ministry and song is a real challenge to teenagers as she sings them into the Kingdom on the silver strains of love."

When the Bakers stepped into the studios of High Fidelity Recording Inc in Wichita, Kansas to begin recording Isabel's songs, the musicians assembled for the session - Joe Utterback (piano), Bob Garvey (lead guitar), Don Nunn (bass) and Jim Kincaid (drums) - quickly discovered that Isabel had "a big pair of lungs" but no musical training. Said Utterback, "Isabel had no understanding of music and had written nothing down for the sessions. She did not know about keys, time signatures or chord names." The sessions for 'I Like God's Style' took two days, starting at 10am and working hard through the day. The transcription of Isabel's songs to lead sheets was done by Joe: "She just played them again and again and I wrote down the musical layout for each song." Working out arrangements proved difficult at times. As Joe remembered: "It was hard to figure out how to set up the songs. Some were easier to transcribe than others." A particularly hard one to crack was "The Gaderian", a song about the demonic healed by Jesus. "That was a tricky one," remembered Joe.

The raw, occasionally shambolic country gospel on the album may not quite be the rockabilly longed for by collectors or "the very first Christian rock album" suggested by Harkit Records. But 'I Like God's Style' is a fascinating period piece from an era when singing songs about Jesus while playing an electric guitar was still considered a radical act. And it's also a weird coincidence that the photo on the front cover bares a strange resemblance to Larry Norman!

I am doing research on this and no one seems to know what happened to young Isabel. Anyone know?