Jamie Kimmett: Nashville-based singer / songwriter with the "Since I Met You" radio hit 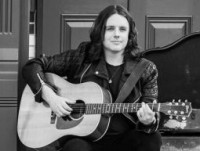 If you've been enjoying "Since I Met You" on Cross Rhythms radio you may have wondered about the artist Jamie Kimmett. So let me explain this lad has come a long way. From Kilmarnock to Nashville via LA and London, Jamie has certainly been turning heads and pricking ears with his melodic calls to faith. His CV includes collaborations with Steve Porcaro (Toto), Randy Jackson (session bass legend), Babyface (Bruno Mars), Jeff Silbar (Garth Brooks, et al), Erik Griggs (Boyz II Men) and Michael Sherwood (Air Supply). These names are part of the bedrock of contemporary music. They are ingrained, deep-seated, implanted, rooted and innate. It's astonishing that, after posting a couple of songs on MySpace in the early '00s, the unknown Scottish singer/songwriter was invited to Los Angeles, which resulted in these stellar collaborations. And, even more impressive, he found his faith not long after he arrived in LA: "Everywhere I went, people were talking to me about God. I said, 'The next person that invites me to church, I'll go.'"

Jamie continued, "So I ended up in a church in Bakersfield, California and, I'll never forget this, the guy was preaching from Genesis, chapter three. When he shared the Gospel, that Jesus came to die on the cross for me, that was probably the most powerful moment of my entire life. Within a week or two of coming to faith, I got the biggest opportunity that I'd ever had, meeting with a major record label and they offered me a deal." This was obviously a great opportunity, but something didn't feel quite right to Jamie. "The way that they wanted to promote me and put me together as an artist, I just wasn't sure. So I flew back to Scotland to try to make my mind up about this record deal and I found myself in a Bible study trying to figure out what the right thing to do was. The verse was [about not ignoring the sin of those who have sacrificed their children to Moloch]. I needed something practical and I said to Lorna, the person who I was doing the study with, 'I don't think this is the advice I'm looking for.'

"This woman Lorna [Farrell] is my best friend today and has managed me for five or six years. God brings people into your life for a purpose. And his timing's always right. I flew back out to Los Angeles and I'm sitting in the meeting with these executives and this one guy looks at me and says: 'Look, I don't know what your problem is. There's people that would sacrifice their first born child for this opportunity.' I was shocked. I couldn't believe he'd said those words. God speaks through his word and so I turned the deal down." Soon after that Jamie was baptised on Malibu Beach.

After this Jamie paused his music to enrol at a Bible College in London. He was on the staff of a Baptist Church and busking to pay his rent. This was in 2015. Once he'd made the rent by playing pop covers, he would worship the Lord with his own songs. That's when God spoke to him again. Jamie said, "I began to feel a pull towards Christian music. Christians from all over the world, from Spain, from Mexico, from China, from America, were coming up to me and saying, 'Can I pray for you? I just feel like you need to use your voice to serve God.' I went home that day and I went, 'Okay God, I know what you're saying.'" This led to Jamie doubling his usual take by busking only with self-penned songs of worship.

Jamie completed a theological and pastoral training course but then relocated to the epicentre of the Christian music world, Nashville. Within a few weeks he'd signed a deal with Provident/Sony and has since been writing and touring with the likes of CCM big hitters Zach Williams and Casting Crowns.

On writing, Jamie told the NewReleaseToday website, "I write about things that are real to me and hopefully others. I write to glorify God. I also get beats, rhythms, melodies, lyrics and sermons popping in my head all day. I usually record them on my phone immediately then decide later if it should be a song, a talk or if it needs to be deleted! Ha."

On how God's word has inspired his faith and music journey, he told Lifter Today, "The word of God has probably been the most important and life-giving instrument in my faith and music journey. It has shaped how I see the world, myself, and most importantly God. I believe what we think about when we think of God is the most important thing about us. The Bible is God's revelation of himself to the world and this has greatly impacted my approach to life and songwriting."

So far Jamie has released four singles: "Since I Met You" and "Prize Worth Fighting For" in 2018 and "Burdens" and "Love Your Neighbour" in 2019. All have been collected on the EP 'Prize Worth Fighting For' along with three new songs. Jamie is now working on an album. Meanwhile, Jamie's younger brother made headlines recently in Scotland, attending a Kilmarnock FC home match in full Kilmarnock blue and white Santa outfit. A talented family.