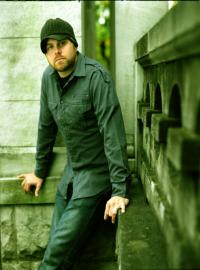 New American singer Jeff Anderson has been described as "bringing a sort of unity to the 'singer/songwriter' and 'worship leader' labels." Certainly his debut for Gotee Records 'Seamless' is one of the freshest albums of the last few months. After signing with Gotee Records, plans were soon made to release an EP and to get Anderson out on the road but, after hearing the compelling compositions being brought to the table, the EP concept soon grew into a full length release. Said the singer, "I kind of went from being considered this developing experiment that they were going to test the waters with to someone on their roster they really wanted to push."

Much of the excitement from the label about Jeff's album stems from the song "Open My Eyes". The track blends yearning vocals with progressive pop, rock and a roundhouse rhythm section akin to the creative likes of Coldplay or Keane. Such a passionate, rock flavouring peppers the remainder of the record, which features nine other vertically focused cuts produced by John Reuben, engineered by CR Pendleton (John Reuben, Spoken) and mixed by Shane Wilson (Michael W Smith, Delirious?). "The music doesn't so much have the standard worship sound, but more what you'd hear on general market radio," Anderson observed. "That being said, it's still a series of prayers from the heart and I feel like that breeds an opportunity to reach across to a wider audience." Such a desire builds from an original teenage ambition of breaking down walls and bridging together the body, which he's able to do with the universal messages of adoration on songs like "All I Need" and "As I Am". "I Will Follow" adapts an appeal of unabashed surrender, "All We Have Is Now" calls for living an abundance filled existence even amidst one's trials, while "So Alive" bursts with a motif of thanksgiving.

A key moment in Jeff Anderson's spiritual development was while attending a performance of Steven Curtis Chapman and hearing him sing the moving song "Remember Your Chains". "All of a sudden I had a real burden for the Church and I felt the need to lead people into the presence of the Lord, regardless of the denomination," he recalled.

During his teenage years, Anderson began to observe a division among many of the people within Church and among the Christian community as a whole. The results of such observations instilled a strong cry of unity within his heart. While studying vocal performance at Capitol University Jeff began to attend the Vineyard Christian Fellowship in Columbus, Ohio. "Going to the Vineyard got me plugged into all sorts of circles and I soon found myself leading worship at a service called Joshua House for young adults in the Vineyard movement," Jeff explained. "I saw a lot of fruit come out of that, starting with the breaking down of any stereotypes between believers of different backgrounds and moving into just a huge freedom to worship the Lord. Soon I wrote my own music, played the songs at church, saw them latch on pretty well and decided to make a record."

The singer/songwriter is pleased with the way 'Seamless' has turned out. "The one thing I can really say about this album is that there's a lot of diversity in topics and dynamics. I always view people's emotions as a roller coaster, so there are a lot of ups and downs with the music that ring you to all different spiritual places." A case in point comes in the mellow beginnings of "Your Love Never Fails Me", which swells into a climatic, European pop influenced eruption. There's also the melodic introspection of "I Don't Belong Here", which was actually crafted in heavenly hopefulness after Anderson's wife experienced a miscarriage. Equally urgent is the vibrant assault of "Paralysed", which speaks of coming before the Lord with reverence and awe.

"There is a lot of integrity going into this project and I feel like it's turned out really solid in a way that can relate to a wide spectrum of people. After all, that was the original stirring in my heart, and after having stuck with it so long, I trust the Lord will use it in whatever way he sees fit."

What's your most favorite song?

I've been listening to Anderson's "Seamless" cd for two years now. It is definitely one of my all-time fav cd's, and I hope he is working on a new cd now. If he has a blog, website, or twitter, I'd like to know about it.