Southampton-based worship leader Jim Rogers first came into view with his 2006 EP 'The Lift' before attracting wider attention when one of the songs featured on the Soul Survivor release 'The People's Album 3'. Since then, he has gone from strength to strength and has released his first full album 'Grandeur And Grace' which sees a contribution from renowned singer/songwriter Cathy Burton as well as a host of well-crafted original worship songs. Meanwhile, Jim continues to lead worship at his local church in Lee-on-Solent on the south coast of England with an overriding passion to see people set free in worship whilst giving glory to God in all aspects of their lives. I caught up with Jim to ask him about his music ministry and to clear up a case of mistaken identity.

Lins: When people hear you for the first time, are they ever surprised that you're not an ageing country singer instead of youthful worship leader with a name like yours?

Jim: Normally, people make the assumption that I am over 60 because I have the name Jim although I'm not so sure about the country singer bit. I have been known to wander off into the Hampshire countryside with a guitar though!

Lins: Your new album has been out for a couple of months now. How did it come about?

Jim: 'Grandeur And Grace' came about from just having the opportunity to record some of the songs I had written over the last two to three years. I'd brought some of these songs to my own place of worship, Lee Community Church, and other songs have just been sitting around. All of them are primarily worship songs and that has always been my passion. Whether a song works congregationally or not I still love to write songs that focus on God. My church is quite small in number but it has some gifted people. My good friend Ross Gill (co-producer of 'Grandeur And Grace') is really into producing so it just fell into place. Basically, there were the people there to do it and I had the songs so we decided to record something.

Lins: What would you like to see 'Grandeur And Grace' achieve?

Jim: The purpose for the new album is to really help and encourage people to worship God and meditate on him. I am hoping it will be inspiring and a joy to listen to as well. Unfortunately, I am not in a position to have it widely distributed or marketed as I am from a small local church but our church does have the resources in terms of people and gifts that may allow us to develop further in the way of producing our own home grown worship songs. The album has achieved already what I would have liked it to do and that is just to be enjoyed and have some of the songs used in my church and surrounding churches. Anything other than that is a bonus.

Lins: I see there's even a guest appearance from Cathy Burton.

Jim: The opportunity for Cathy to sing on a few tracks came about when Ross and Harun Kotch, the two producers of the album, mentioned that it might be good to get a female vocal part to add some dynamics to some of the songs. They'd already met and knew Cathy from when they where in a Christian rock band and it wasn't far for her to come down and do some recording. It was great to meet her and have her sing on the record. She adds something different to the songs and she got really into it. 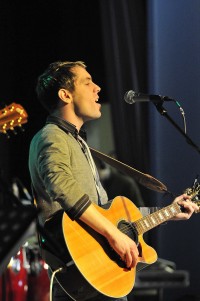 Jim: That's a hard question because I'm biased! "Precious Gift" is a favourite of mine as it just allows me to think about Jesus and what exactly he did on the cross and it also allows me to express my praise. Also, I think "Holy Is The Lamb" is a track that stands out.

Lins: You must be pleased that "Holy Is The Lamb" has featured on 'The People's Album 3'.

Jim: Yeah, it was a really great surprise. They've done a fantastic job in recording the song and putting it out there. I love the fact that they changed the key of the song and got Andreana Arganda to sing it. It all came about when a friend informed me that Soul Survivor were doing another album in the series and that they were asking for people to send in their songs. My friend encouraged me to send one in and I did but I never thought it would get anywhere. It completely blew me away when I received a call asking if they could use the song. It gave me a huge boost of confidence and it also allowed me to meet new people. Hopefully, in the long run, the song will bless people as it reaches far beyond my own field of influence.

Lins: You've been a worship leader at Lee Community Church for quite a while now. What does it mean to you?

Jim: I have been leading worship there for a good five to six years now. Before I got married, I was overseeing the worship team but now I lead worship one Sunday a month as well as leading at some surrounding churches with my wife. I'm responsible for bringing in new songs that will enable our congregation to express their worship to God in fresh ways. I'm constantly aware that I need to allow there to be space for the congregation to express their worship quite freely. As a worship leader, I'm also mindful that my life should be a continuing sacrifice to God. Whether I am leading one week and not the next, I am still leading worship in the sense of being an example. Obviously, I am not perfect but I believe that leading is all about honouring God and having a lifestyle that reflects it. It should be about serving and that means the most to me.

Lins: It sounds like there are plenty of challenges in leading worship.

Jim: One of the challenges is the continuing aspect of pointing people to God and not allowing myself to get in the way. It is an ongoing process of dying to one's self and making sure God gets all the glory. I am sure anyone who is in some sort of Christian leadership experiences this sort of thing. On the other hand, there are many highlights of working in music ministry - opportunities to serve God and see his people really behold his glory within the worship times, for example. It is fantastic when the body of Christ comes together to sing and proclaim God's praises and when individual lives are really changed. There is something unexplainable when we meet God and become part of that coming together through the use of music.

Lins: What are your plans for the future?

Jim: Thankfully, I may plan my course but it's God who determines my steps. I'll continue to serve God in my church and keep him at the centre of everything. I would like to do a lot more songwriting and maybe co-write with other people. I hope to become a better worship leader, whether that's in the abilities God has given me or in my relationship with Jesus and the people around me. Other than that, I would like to see how 'Grandeur And Grace' does. If it feels right then I would like to do some more recording - we'll have to wait and see!