Jimmy Greene: Jazzman lights a candle rather than cursing the darkness 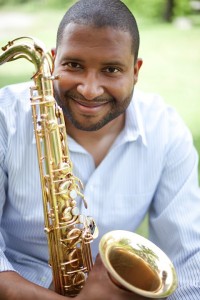 In this week's Billboard Gospel Albums chart, alongside the listings for best-sellers by Fred Hammond and 3 Winans Brothers and the compilations 'Motown Gospel' and 'Wow Gospel 2014', is a jazz album, 'Beautiful Life', by Jimmy Greene. It is a very special album born out of an appalling tragedy which overtook the critically acclaimed saxophonist. 'Beautiful Life' is a celebration of the life of Jimmy's six year old daughter Ana Grace Marquez-Greene who was shot dead along with 19 other children and six teachers on 14th December 2012 at Sandy Hook Elementary School in Newtown, Connecticut.

Said the 39 year old musician, "In the days after my daughter was killed, playing and writing music wasn't even a thought. I was very much in shock, grieving deeply and trying to just function coherently. Family and friends surrounded us and held us up, and we received 10,000 communications - emails, texts, Facebook messages, voice calls, letters - from people around the world. The community of musicians was front and center for that support. When I called, they responded, 'Whatever you need, just say the word and I'll be there.'"

In late January 2013 Greene, feeling that he needed to get back to "some sense of routine," resumed a regimen of practise and composition. Soon after, Norman Chesky, the co-owner of Chesky Records, offered to finance a recording. Said Greene, "An intense amount of media attention was focused on my family and all of us in Newtown, so I was fairly guarded whenever communicating with someone for the first time. But Norman offered to donate the production of a recording that I could do whenever I was ready and to give me complete ownership. I was humbled and honored by his generosity and began to devote my energies to the project." Greene decided to weave lyrics and singers into the flow for the first time on one of his recordings. "Ana loved to sing and listen to singers and had a wonderful singing voice," he explained. "So an album dedicated to her memory needed to have singers and songs that were important to her and me and my family."

'Beautiful Life' opens with a recording of Ana singing the traditional "Saludos" ("Greetings") at a Christmas celebration (parranda) in Puerto Rico with her mother Nelba MÃ¡rquez-Greene's family - and her father playing in the background - a year before her death. Greene segues to a section in which he and guitarist Pat Metheny perform "Come Thou Almighty King" before concluding with another family recording of Ana singing the hymn to her brother Isaiah's piano accompaniment. 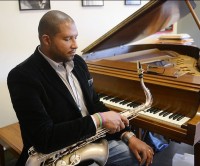 Another of the album's unforgettable moments comes in the track "Ana's Way". Greene initially recorded "Ana's Way" instrumentally as "Ana's Grace" on the 2009 recording 'Mission Statement'. Complementing Grammy Award-winner Kurt Elling's characteristically penetrating, graceful interpretation is the Linden Christian School Early Years Choir, comprising classmates of Ana and Isaiah in Winnipeg with solos by Greene and Canadian pianist Renee Rosnes. "It was brutal seeing Ana's friends again, without Ana there amongst them," Greene admitted. "But we got through it somehow and I think the results are very touching."

Jimmy was born in Bloomfield, Connecticut, in 1975. His father, James Greene Sr, who was an amateur saxophonist and songwriter, got his son making music at an early age, buying him his first alto saxophone at age six. Two years later he began taking lessons and by junior high the younger Greene had become enamoured with jazz music. When he was 15, his teacher brought him to the nearby larger town of Hartford to meet Jackie McLean, the legendary saxophonist who at the time was both directing the jazz programme at Hartt College of Music and running a community school called the Artists' Collective. Greene studied with McLean throughout high school. McLean said that Greene was a natural prodigy, taking a week to learn material that should have taken a month to master. Greene also benefited from the association with the Artists' Collective and McLean when he went to record his debut album, 'Brave New World', which featured several artists from McLean's ensembles, including trombonist Steve Davis and drummer Eric McPherson.

Greene enrolled at Hartt immediately after graduating from high school and was a runner-up in the Thelonious Monk Competition one year before graduating in 1997. Soon after graduation he relocated to New York City, where he played in Avishai Cohen's sextet and with famous jazz artists like Jason Lindner and Omer Avital in sessions at the all-night Greenwich Village club Smalls. His performances were critically acclaimed - Ben Ratliff of The New York Times wrote of a December 1997 performance by Greene, "[Greene is] in command of harmony and can sound very organised racing through fast tempos, but he also relaxed into ballad standards and let an intriguing personality shine through." By 1998, Greene had his first recordings - on an RCA Victor compilation called 'Live At Birdland' which was released in early 1999. RCA also issued 'Brand New World', which, in addition to Davis and McPherson, featured pianist Aaron Goldberg, trumpeter Darren Barrett, bassist, the late Dwayne Burno and percussionist Kahlil Kwame Bell.

Greene made a series of recordings for the Criss Cross label, starting with 'Introducing Jimmy Greene', featuring a sextet including Davis, Goldberg and McPherson, which actually was recorded prior to 'Brave New World' but released shortly after it. He appeared on albums by Barrett, Jason Lindner, Ralph Peterson, Tom Harrell, Mario Pavone and Jeremy Pelt in the early 2000s before the release of his second Criss Cross album, 'Forever', in 2004. This was a spiritually minded quartet project on which he was joined by Xavier Davis (piano), John BenÃ­tez (bass) and Jeff "Tain" Watts (drums). 'True Life Stories', his third Criss Cross album, came out in 2006 and featured Pelt (trumpet), Xavier Davis, Reuben Rogers (bass) and Eric Harland (drums). The rhythm section of Rogers and Harland returned for 2007's 'Gifts And Givers', along with Marcus Strickland (saxophone), Mike Moreno (guitar) and Danny Grissett (piano). For 'The Overcomer's Suite' (2008), recorded live in Hartford, Greene moved to the newly formed Nu Jazz Records label. It featured a quartet including Xavier Davis, Luques Curtis (bass) and Kendrick Scott (drums). A year later, he returned with 'Mission Statement'. The concert album 'Live At Smalls' appeared in 2011. As a member of Harry Connick Jr's Big Band, Greene is a featured soloist on two DVD releases, 'Harry For The Holidays' and 'Only You'. He was featured as a soloist on Connick's 2003 holiday special aired on NBC, in addition to NBC's Today Show and BBC's Parkinson Show. Greene is Assistant Professor of Music and Assistant Coordinator of Jazz Studies at Western Connecticut State University in Danbury, Connecticut.

With the release of 'Beautiful Life' Jimmy is now experiencing the major record sales that his consummate talent deserves. It has received numerous accolades, the Irish Times, for instance, writing, "Rather than curse the darkness Greene chooses to light a candle, gathering some of his illustrious musical friends to celebrate his daughter's life and raise money for the project started in Ana's name." Jimmy himself has written, "Music has a unique way of communicating and healing. I'm so thankful that music is my profession - that I am able to write and arrange to create settings that convey the emotions I experience, not the least of which is the pain that my family and I have endured at a time when words fail."