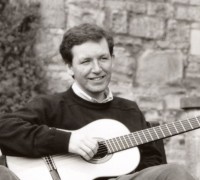 Tony: Simeon & John are still fondly remembered by Christian music buffs. What have you been doing since the duo split up?

John: Well, I got married this year, for one thing! Other than that, I have been teaching guitar and playing in a couple of local bands in the Manchester area. In 1998 I was fortunate enough to be part of the worship team at the Lambeth Conference, which was a fantastic experience. I was one of about four or five musicians, led by Geoffrey Weaver, of the RSCM. Then, about a year ago I started recording 'A Still Small Voice', and, after getting married, moved to Birmingham this summer.

Tony: How does a classical guitarist come to compose? Do you doodle around until inspiration comes?

John: That is embarrassingly close to how I work! I do have a keyboard which I can connect to a computer, and I find that very helpful when composing, but often the best tunes will come from just strumming around when I am waiting for a student. The hard part then is trying to remember what is in your head! The old cliche of hit songs that only took 20 minutes to write is kind of true for me, except that I never complete anything in 20 minutes ... but the basics can be done in that time. Very often a piece isn't really finished until I'm in the studio. There was also another pair of ears there, belonging to Andy Summers, who was excellent throughout the recording.

Tony: Have you been influenced by people like Julian Bream or Segovia?

John: To some extent, though neither of them have written their own music, to my knowledge. But I have seen both of them play concerts, and Bream in particular was inspiring. I think the way he played influenced the way I might tackle a classical piece. My influences, not surprisingly, come from the music I used to listen to a few years ago, like Pink Floyd, Mike Oldfield and Genesis. It all sounds very "old hat" now, but there is a piece on 'A Still Small Voice' which I would never have written if I hadn't heard 'Carpet Crawlers'. There is also a solo acoustic guitarist called Gordon Giltrap who used to inspire me a great deal.

Tony: Simeon & John seemed to tap a large audience for quieter, meditative music. Was that something you set out to do?

John: Not exactly. Certainly, that is often the type of music that I write; 'A Still Small Voice' is meant to be about listening to God - the theme comes from my experience of prayer. I have a friend with whom I have prayed for the last 10 years - and we never say a word in prayer, the majority of the time is spent listening. I think there is a bit of variety on the recording, it isn't all at one pace, though you might say that the general feel is a reflective one.

Tony: Some might argue that there is little difference between your music and an album released through a company like Decca or Virgin Classics. Wouldn't it make sense to record with a "proper" classical label?

John: I am very happy to be recording with Eagle, and where my music has a Christian theme I am committed to letting them hear it first. But it's an interesting question; I am about to record an album of classical guitar music, possibly including a couple of my own pieces, which isn't really appropriate for Eagle. It's up for grabs at the moment, so perhaps I'll give Richard Branson a ring.

Tony: What on earth do you make of all the noisy, teenage music which is part of the Christian music scene?

John: I can't say I've heard all that much of it, but if it is bringing young people closer to having a real faith in Jesus, then it has got to be good.