Joseph Haydn: Composer of 'The Creation' and inventor of musical wallpaper 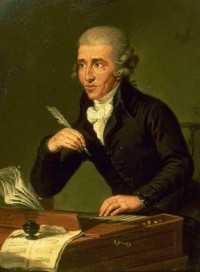 Sacred wallpaper!! No, it's not a new oath coined by a Mutant Ninja Turtle...but they say that you can judge a person by the things they surround themselves with-or decorate their homes with. This being the case, what better starting point with Herr Haydn than his sacred wallpaper!

"I was not rich enough", he said "To buy myself beautiful paintings so I made myself a wallpaper that not everybody can have..." Haydn was referring to 46 unpublished canons to German lyrics that hung on his bedroom walls. His money-conscious missus once complained about a lack of cash saying (cheerfully!) that if he died tomorrow, there wouldn't be enough money in the house to bury him. "If that happens" replied H., "Take the canons to my music publisher - I guarantee you that they are worth as much as my funeral requires." Beats Swinton insurance doesn't it?

The picture that emerges of Haydn is that of a man who was devoutly Catholic and, unusually for someone of his talent, very humble. He never lost sight of his poverty-stricken roots and was always thankful for the opportunity that his God-given talent had given him. One of his first breaks came when a talent scout (Reutter) singled him out on account of his exceptional voice, for the Choir School in Vienna. A possibly apocryphal story has it that the director of the school wished Haydn to keep his youthful voice and asked his father for permission to take a couple of short-cuts (excuse the pun) to that end. A horrified Daddy Haydn hot-footed it to Vienna, and thinking that the operation may already have been performed, greeted his son with "Can you still walk?" Bring back the 'Good old days' that's what I say! Throughout his long life, spanning the Motzart to Beethoven era, Haydn retained a great sense of humour. Sometimes it was potentially harmful.

From the start, Haydn acknowledged indebtedness to God for his talents, and all his major works began with the inscription, 'In the name of the Lord, Praise to God, To God alone be the glory' - and it was not an empty gesture.

After his voice had broken and he was thrown out of the Choir School by the caring Reutter, Haydn spent some months that he would never forget in an attic room teaching himself harmony and composition from the books of C.P.E. Bach and Fux. The roof leaked and he often woke covered in snow or wet through. Eventually he started to get some degree of recognition and had several quartets published.

On one occasion he was walking with his friend Ditters past a common beer hall. Inside some musicians, half drunk were fiddling miserably away at a Haydn minuet. "Come on let's go inside," said Haydn. They went into the taproom and Haydn asked in an offhand manner, "Whose Minuet?" "Haydn's" came the reply. The young Haydn moved in front of the man and exclaimed, "That's a stinking minuet!" At this, the others rose to smash their instruments over his head, but Ditters pushed his friend back outside and to safety.

Arguably his greatest work, 'The Creation' meant a great deal to Haydn. He said of it, "Only when I had reached the halfway mark in my composition did I perceive that it was succeeding, and I was never so devout as during the time that I was working on 'The Creation'. Everyday I fell to my knees and prayed to God to grant me the strength for a happy completion of this work..." In his old age 'The Creation' was played in his honour with many distinguished guests present - among them Beethoven. Haydn was always stirred by hearing 'The Creation' well played, and in his old age it was hazardous to his health. On this occasion, at the declaration amid sparkling harmonies, "Let There Be Light" the audience broke into the loudest applause and Haydn lifted his hands heavenward and said, "It comes from there!" He had to be carried out at the end of the first part. In his instrumental works too there was sometimes a sacred inspiration. One of his oldest symphonies portrayed the idea of God speaking with an abandoned sinner, pleading with him to reform, however in his old age his memory was such that he could not remember which symphony it was.

Most of his life was spent in the service of the exceedingly wealthy Esterhazy family, (from 1761 onwards). They were great patrons of the arts and they provided Haydn with a conducive backdrop for his creativity, but he was also subject to the vagaries of keeping royalty happy. On one such occasion the renowned Haydn wit came into play yet again...

Haydn and the Esterhazy court musicians had to leave their wives for four months to attend Prince Nicholas at his new palace. While there the Prince decided to lengthen his stay a further two months - to the despair of the musicians who implored Haydn to help. One evening soon after, right in the middle of 'the most passionate music', one voice ended (voice = instrumental part), the player picked up his music, snuffed out his light and walked off-stage. Soon afterwards, another followed suit, and another, and another, until the entire orchestra was gone. Needless to say, the hint was not lost on Nicholas Esterhazy who allowed them to return to their wives. The piece is known today as the Farewell Symphony.

Amongst his other musical jokes was the Surprise Symphony, composed during a stay in London where Haydn found that the English tended to have a good meal before coming to a concert, and probably drank a bit too...this resulted in half the audience tending to nod off in the quieter moments of a composition. The grunts and snores that punctuated such moments were not appreciated by the Muso's. Enter the Surprise Symphony!! A beautifully quiet start to the slow movement, the eyelids strain against the pull of gravity...cares start to fall away, and then the crashing timpani thunders and half the audience are left wondering how to retrieve their 18th century wigs from the chandeliers.

Haydn was an irrepressible genius coming out of poverty to consort with kings and princes. Left to learn his art on his own in a period of musical rules and restrictions often meant picking up the dusty old carpet of tradition and beating the dust out of it! He was criticised sometimes for the over-use of certain intervals, but his general rule was, if it sounds good it's OK and he had no time for critics who put music under the microscope and analysed the guts and vitality out of it. His talent he always attributed to God, and constantly acknowledged God's direction in his life and music.

HAYDEN'S LIFE
Haydn was born in Rohrau in Austria, on the 31st March 1732 the second son of the wheelwright Matthaias Haydn. At the age of eight he was admitted to the school at St Stephen's Cathedral in Vienna and he remained there until 1748 when his voice broke. From that point on the Kappelmeister of St. Stephens, Ceorg Reutter, took little interest in Haydn. He was dismissed from the choir and forced to live on his own resources. He taught himself composition and harmony and as a result was probably less affected by the strictures of the time. His early compositions from this period, including string quartets and the Mass in F, brought him increasing recognition. In 1759 he was appointed Director to Count Morzin and one year later he married Maria Anna Keller - more because he felt he ought to be married than from love - as a result the marriage was never happy. When in 1761 Count Marzin's orchestra was disbanded Haydn was snapped up by probably one of the richest families in Austria - the Estherhazy's - where he remained until 1790. When Prince Nicholaus Esterhazy died, the London impressorio Johann Soalomon persuaded Haydn to visit England where he was well received. He was given an honorary degree by Oxford University for which occasion he wrote the "Oxford Symphony". Whilst at a performance of Handel's Messiah, Haydn was moved to exclaim, "He is the master of us all." He retained a playful sense of humour throughout his life, which came through in his music too in "The Surprise Symphony", "The Farewell Symphony" and "The Clock Symphony".

Haydn returned to Vienna via Bonn where he met Beethoven, who became his pupil until he made his second journey to London in 1794. Whilst there he was commissioned to write "The Military Symphony."
He spent his last years in Vienna and his compositions were now tinged with the influence of Handel in his masses, The Creation and The Seasons, which were immensely successful. Haydn has been called the Father of the Symphony but in fact the symphony as a form had been around long before Haydn began to compose. Haydn died in 1809 and was buried in the Hundsturm Church. He was later exhumed at the wish of the Prince Estherhazy and re-interred in the upper parish church at Eisenstadt.

Recommended recordings
THE CREATION: Vienna Philharmonic Herbert Von Karajan
Edith Matthis (sop)
Fransisco Araiza (ten)
Jose Van Dam (bass)
Deutsche Gramophon 410 718-2 (2 CD
set)
Haydn himself viewed this as his greatest achievement - and what a task - to musically portray the power and beauty of Creation! This work displays Haydn's own depth and ingenuity in the creation of music.

SEVEN LAST WORDS OF THE SAVIOUR ON THE CROSS: Delme Quartet
John Trussler (violin) John Underwood (viola) Johnathan Williams (cello) Hyperion CDA 66337
Motzart said: There is no-one who can do it all - to joke and to terrify, to evoke laughter and profound sentiment and all equally well, except Joseph Haydn.' "The Seven Last Words" were commissioned for the cathedral at Cadiz for use on Good Friday - beginning with an introduction and at the end an earthquake! After each of the seven words the Bishop would add a commentary and exhortation.

SYMPHONIES 93/94/100: ("SURPRISE" SYMPHONY AND "MILITARY" SYMPHONY)
Berlin Philharmonic
Herbert Von Karajan
Deutsche Gramophon 427 809-2
The Surprise Symphony affords an insight into the lighter side of JFH with a resounding boom in the quiet movement, whilst the 'Military' Symphony is also from one of his London periods. A quality recording from the Berlin Philharmonic.

TRIOS FOR PIANO & FLUTE "JACOB'S DREAM":
Chris Keller (piano) Christian Von Borries (flute) Accord 200732 MU 750
The piano was a relatively young and developing instrument in Haydns' day and not capable of the same breadth of expression as the modern instrument and this is reflected in the kind of music written for it around this time closer to the harpsichord than to the orchestra.

SYMPHONIES. NOS 88/89/92 (INC THE "OXFORD" SYMPHONY)
Vienna Philharmonic
Karl Botim
Deutsche Gramophon 429 523-2
The Oxford Symphony was written for the occasion of Haydn's honorary doctorate from Oxford University from this point on he could operate on organs!