Judy Mackenzie-Dunn: The return of the British Christian music pioneer

One of the early pioneers of the British contemporary Christian music scene recently made an unexpected return to the Christian bookshop racks. JUDY MACKENZIE-DUNN spoke to Stuart Dearsley. 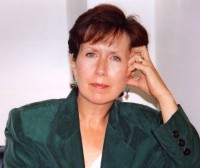 One of the finest singer/songwriter albums 'Original' released for ages slipped into the CD racks recently. Cross Rhythms' esteemed editor enthused about the "haunting acoustic-based songs, full of moving and poetic images caught and held by fine arrangements."

'Original' is not only a breathtaking creative tour de force. Its release (by ICC) also heralds possibly the longest time span between album releases ever recorded in UK Christian music history! For its creator is Judy MacKenzie-Dunn who, as Judy MacKenzie, was probably THE biggest soloist in British Christian music of the '60s/early 70s. Judy still recalls those early pioneering years with pleasure.

"When I became a Christian at 16, I started to write songs and whilst at college doing a music degree, I started doing gigs every weekend," recalled Judy. Her career continued to rise and in 1971 Judy was asked by a Christian youth organisation to perform at a rally at the Royal Albert Hall being led by Billy Graham.

"Without doubt one of the most exciting moments of my life," Judy said. "The invite came as a complete surprise and what made it even more special was when he asked to speak to me. Apparently it was unusual for him to speak to the musicians and we chatted for a while and he said how much he liked my music." Impressed he obviously was as in the summer of the same year Graham invited Judy to join him on two American crusades which drew a total audience of 250,000!

Gradually though, things began to change and over a period of time Judy became disillusioned with the music scene and what she saw as people jumping on the bandwagon. "This really took the heart out of what I was doing, but still I continued to give it my all and near the end I joined up with Dave Cooke (one of Cliff Richard's songwriters) and we did some gigs together. One time together saw us do more secular work and spend a lot of time in pubs and clubs using a mixture of songs, both Christian and secular."

Communicating to non-Christians is however one of the closest things to Judy's heart. "I really got fed up with going to concerts where 95 per cent of the audience were Christians," said July, "as I felt I was preaching to the converted. I felt as if they were saying that Christian musicians couldn't compete with their secular counterparts."

The time eventually came when she had to make a few important decisions in her life. "I got married and found that I didn't want to travel anymore and that I was being drawn to the life of a housewife! I also wanted to have children and decided that I had to make a choice between that or continuing with a career that I was no longer enjoying. It may have been a lack of ambition on my part but I chose to leave the music scene."

Being a Christian "superstar" couldn't have been easy either. "No, it wasn't," remembered Judy. "Everywhere I went people recognised me and I was continually asked for my autograph. It was also very difficult to be in a settled Christian fellowship so that's why it was nice when I visited Spring Harvest a few years ago and no-one recognised me! It was quite humbling to be on the other side."

I asked whether, now that Judy is no longer a full time musician, she had a lot of free time. "I wouldn't say that as such as my two children were born and they took up a lot of my time. I was also Director of Music at Altrincham Baptist until I moved south to Croydon two years ago. I now attend Purley Baptist where I hold similar position."

I asked if there was much difference between being a performer to a worship leader. "It's a big difference really as they give you different joys and problems. You need a certain skill and spiritual stamina for leading worship along with good relationship skills. You're part of a team, not an individual. The biggest joy is knowing that you're making contact with people. Being a performer you need lots of self confidence in your own ability."

Music was obviously still a major part in Judy's life and I asked when she felt it was time for a comeback. "The first time was back in the mid '80s when I felt God asking me to do an album. I had also written a lot of material during my time out. My husband paid for the album and I sent it to various record companies, but no-one wanted to know. Soloists were not very big at the time and the music scene was dominated by praise and worship albums. I still sold quite a lot of copies by word of mouth but the follow up didn't really do anything at all."

Judy MacKenzie-Dunn is obviously a lady determined not to give up and with her third attempt at a comeback she might just do it. "I was still writing lots of songs and felt that by doing nothing with them I was neglecting God's gift to me, so I sent copies of my albums to Paul Field an excellent musician in his own right and an old friend. He thought they were good so I let him have a demo of some recent stuff and he, along with Dave Cooke, took it to Peter Martin at ICC." ICC were impressed with what they heard and decided to, as July herself puts it on her album cover, "take a chance with a lady almost past her sell-by date"!

"That's a comment I've had a lot of complaints about," laughed Judy. "But after the times I've had, it was a measure of how I felt."

I wondered what Judy thought her latest album had to offer. "For Christians, I think it's encouraging as all the songs are to do with different relationships with God. People need concrete images to grasp things and by using a variety of nouns I feel that the album has this. To non-Christians, the songs say things about God in a straightforward way. 'Cry From The Heart', which is probably my favourite track, explains that you can't reach God by good works and that God is available to everyone." Other favourites include "Wear And Tear", which is a song about her mother-in-law (!), and "What Is Truth", which was written whilst taking her dog for a walk in the woods!

Judy appears to find it fairly easy to write songs so I asked her where she got her ideas. "It can be one of a number of ways. Sometimes I get a line from nowhere and build the song around it and at other times I may feel strongly about a subject and write about that. Sometimes they are quick to write but most of the time they take a while. These days I take my songwriting more seriously and work harder at my lyrics. Jesus painted pictures by using parables and I like to be illustrative in my lyrics," Judy commented.

"I also receive a lot of songs from budding songwriters," continued Judy. "A lot of the stuff I receive is not necessarily for public performance. Sometimes the songs are more suited to an individual, house group or church. Just because the songs are not for everyone it doesn't mean that people should give up writing and I say to them that they should pray for God's will for the songs and get others to pray for them too."

'Original' also sees the appearance of Luke Genter, the famous Dutch musician, and Andy Rushton, a man Judy describes as one of the best musicians she's heard. "He is a great talent and is excellent on both piano and guitar and doesn't get the recognition he deserves," remarked Judy.

So, what are her plans for the future? "Well, to be honest, I don't really know. I'm appearing at Spring Harvest but other than that I have no plans. I've written nine or 10 more songs but it all really depends on how well 'Original' does." Original it certainly is, featuring a good blend of ballads and slightly rockier tracks and for someone making a comeback, this could be just the thing needed for Judy to reclaim her place as one of the top female vocalists in Christian music.

I used to go to the warehouse in carnforth in about 1962 and before that the small club house between Kellet and Capernwray I have been looking through some old record and I have found one a 45 recorded by Judy McKenzie one one side there is since jesus came reap what you sew and on the other side there is "Judys song Have you ever ?would you like the record or do you know who Judy McKenzie is or where does she live