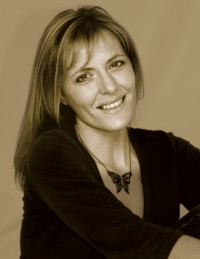 There is a growing interest in folk-orientated singers of every type so it's only appropriate that such interest is extending to Burgess Hill-based singer Julie Hall, who has now managed to release three critically acclaimed albums - 'Bluebells Rising' (2004), 'Days Of Wine' (2006) and 'Balcombe Bridge' (2009). Recently Cross Rhythms caught up with the singer and began by asking her about her background. "I was born in Birmingham into a musical family - my granddad was a percussionist and as a young man played for the silent movies! He'd have to follow a score and throw bricks into buckets of glass and play the xylophone during chase scenes! My brother, who is also a percussionist, has all his old instruments. I started to play the violin at the age of seven. My teacher was a member of the CBSO, and in those days there were spare seats at concerts and she'd get us free tickets. I grew up going to concerts almost every week, and got a job selling programmes as a teenager so I could sneak into the second half. So classical music was what I grew up on. But my brother was into bands like Genesis and YES, which I thought were fantastically cool. My parents were big jazz fans, so there was always lots of different music in the house and my introduction to folk music came through a live LP of Joan Baez, which I played repeatedly. I thought she had the most beautiful voice I'd ever heard."

Julie became a Christian at the age of 18 through a Billy Graham crusade though intriguingly it wasn't an event she had actually attended! She explained, "My sister went, and went forward at the end to pray to become a Christian. She came home and explained what had been said. I remember thinking, 'Wow, I really hope that this is all true', and finding it was true. I went with her to Sutton Coldfield Baptist Church and the first person I encountered was a violinist in the CBSO. He is now a Baptist minister. Soon after I left for Manchester to study at the Royal Northern College of Music. There I encountered some fantastic Spirit-filled musicians who I still play and worship with. It was a wonderful time."

From her early years Julie had gravitated towards folk music. She laughed, "I sometimes wonder if it is simply in my blood. My granddad would always sing in a gravelly, wavery old voice to us at family parties, usually a song with a story and a moral at the end! I love songs that tell stories, and think we need to tell more of our important stories through song. In the Bible, many important events were marked with a song. We need to be doing the same in our time. That's what folk music is all about."

It wasn't until 2004 that Julie began writing songs. She explained, "A good friend from church, Robert Eggleston, had written a play for Easter and asked me if I would write some songs to go between the scenes. I told him 'I don't write songs' and he asked me to try. So I asked God for some inspiration. Soon after I went to hear Martyn Joseph whose performance and songwriting so stirred me up that I wrote most of the songs for the play over the next few days! It was shortly after Easter that I received an email from Robert saying he had been inspired to write some lyrics. Within a few minutes the first song was written, and within a few months of that we were ready to record the first set of songs. It was done in a day, with me playing all the instruments. It was totally thrilling, and a bit scary, recording something of your very own. The title track of that first album is a ballad. It tells the story of the journey through grief, and the hope that is found at the end of that journey. Robert's sister Barbara had died shortly after that first Easter play, and the song came out of that. Another friend was scattering their mother's ashes at bluebell time, and that image of the beauty of the English bluebell wood reflected perfectly with the spirit in the song. I love singing it live, because someone always comes up to me at the end and says how it has helped them, or unlocked something for them in their own grief."

Julie's next album, 'Days Of Wine', was a somewhat more ambitious project. Explained the singer, "I asked Paul Lavender to produce it for me. Being in a studio for a week, with a bunch of great people, watching everyone create interesting sounds with your songs is an incredible experience. I had a throat infection though, but couldn't reschedule. So recording the vocal was a struggle for me. There is a lot of Paul's personality in that recording I think, and my memories of that week are incredibly special. I remember crying at the end of the week because I didn't want it to end."

Through the years Julie has earned a living as a violin teacher though has taken every opportunity to perform her music in acoustic cafÃ© or folk-type clubs or church events. Cross Rhythms asked Julie whether she ever had a chance to sing to her pupils during violin lessons. She responded, "I don't sing to my violin pupils, but I do run baby and toddler music classes so I have plenty of opportunity to sing to them. I love singing lullabies at the end of a session. There is something very precious in singing 'over' someone, singing something good into their life. That's why I included a lullaby on my latest recording, 'Balcombe Bridge'."

Julie promotes Fair Trade and often does concerts for outreach evenings or suppers. She said, "I love the intimacy of smaller venues as I love to tell the stories behind the songs. As a violinist and worship leader, I play with a group called Epiphany. Many of the musicians were involved with a group called Wellspring, mainly based in Manchester. Epiphany plays experimental improvisations, in secular and Christian settings, seeking to share the presence of God through the music, and with them I've travelled to lots of different places, including Sweden last year. It's totally different to the solo stuff, and lovely to play with a large group. Epiphany can have about 12 musicians playing on any one event, and all of them are professional classical musicians."

Julie's latest album 'Balcombe Bridge' was produced by Gareth Davies-Jones, the well known singer/songwriter. Julie explained how she had met up with Gareth. "I met Gareth when I sang at an acoustic cafe up in Northumberland that he was hosting. When I heard his exquisite guitar playing and beautiful songwriting I knew his sound would be perfect for my songs. We both promote Fair Trade through our music, and quite often play on the same bill when he comes down to the south east. Gareth is simply brilliant and I really love what he did with 'Balcombe Bridge'; of anything I've done before I feel that this latest recording really reflects my personality. Gareth's music really deserves a wide audience and I feel very privileged to have worked with him. I hope he will agree to record the next one with me too!" 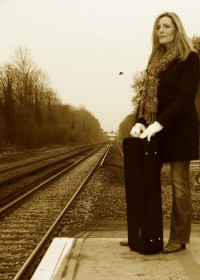 Julie spoke about 'Balcombe Bridge''s haunting title track. "It tells the story of a journey home from work, weary, despondent, asking 'where is God?' And suddenly, the sight of the beautiful viaduct (known by locals as Balcombe Bridge) across the valley bathed in sunlight brings the reminder of bigger, eternal things."

Julie's lyrics are normally written by Robert Eggleston. She spoke about her lyricist, "Robert Eggleston is a very gifted poet (his book As A Boy is available through Amazon) and without a doubt this makes a massive difference to his lyrics. His words are beautifully crafted and make the melody writing really easy. Robert also campaigns for justice issues and organises a Fair Trade and Freedom festival in our town each year. So he puts his money where his words are! He has been a great support and always seems to like what I have done to his lyrics, thankfully!"

Of her many performances Julie finds it all but impossible to pinpoint her favourite engagement. She said, "To be truthful I have too many good memories to choose just one. From the tiny ladies meeting where I wept with an elderly lady after the concert as she asked me to pray for her, to the massive 15,000 Baptist World Alliance event in the National Indoor Arena (scary!), to hearing my voice echo around the Santa Clara Cathedral in Stockholm. . . I think though my favourite gigs are when I get to meet other artists. I was privileged to support Martyn Carthy and Norma Waterson recently, and they were so interesting and sweet. I felt like I was listening to real legends. I adore singing live, packing up and travelling off, not quite sure who I will meet that day. I am incredibly grateful to God, because meeting new people is one of life's greatest joys and fascinations."