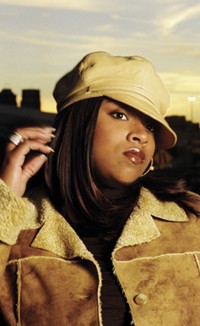 18 year old Kierra 'Kiki' Sheard is undoubtedly the hottest thing to hit the gospel scene for many a long year. She is also the third generation of gospel singers to come from a Detroit family tree that is today rivalling the Winans in its amazing ongoing impact. Back in the '60s gospel matriarch Dr Mattie Clark married gospel artist Bill Moss. They recorded steadily, Mattie being president of the Church Of God In Christ music department for 25 years and Bill recording albums for Savoy and Westbound with his group The Celestials. But it was their daughters, Jacky, Dorinda, Karen and Twinkie who, as the Clark Sisters, were to gain even greater gospel music success. By 1980 the Clark Sisters secured a huge gospel hit with their 'Is My Living In Vain?' album and two years later recorded one of the first ever gospel crossover hits, the infectious "You Brought The Sunshine" climbing the national dance charts. Many more Clark Sisters albums followed though by the mid '90s the sisters were beginning to establish themselves as solo artists.

Karen, under the name Karen Clark-Sheard, released successful albums. But it was HER daughter, Kierra, who surprised everyone when she too emerged as a singing star. As she told Blackgospel.com, it took a while to recognise God's call on her life. She said, "I didn't know that I was called to do this (singing thing) back then, it took me a while to realise it. My mother encouraged me and pushed me out front, which allowed me to begin to actually feel and enjoy what I was doing. When I realised that I was doing God's work for his people, it was a learning process. We think it's an honour to work for people, but we never realise and take advantage of the opportunity to work for God. It was an honour to do God's work, and a big position. I kind of saw it later on around the ages of 12 and 13. It took me a while to realise it. I really didn't even want to sing at first."

Growing up surrounded by gospel music and with her father Dr J Drew Sheard minister of Greater Emmanuel Institutional COGIC, one of the largest churches in Michigan, Kierra was singing as long as she can remember. In fact, a nine year old 'Kiki' won a prestigious Stellar Award for Best Children's performance for her contribution to her mother's album 'Finally Karen'. Kierra admitted that she eagerly picked up musical influences from her extended family. She laughingly named them. "My Aunt Twinkie's squall, Aunt Dorinda's energy, all the crazy notes my mother hits, my cousin's J Moss' 'quick-runs', and my Aunt Jacky's sweet tones."

In 2004 the 16 year old was signed to EMI Gospel and top name producers such as Rodney Jerkins, Warryn Campbell and cousin J Moss were drafted in to produce the precocious talent. Kierra spoke about her eclectic musical style prior to her album's release. She said, "People can expect to hear a variety of gospel musical styles. I see myself as a contemporary gospel hip-hop artist with a traditional 'churchy' flair. I want my music to relate to the hearts of the youth. One of my messages to the youth is that you can still be young, have fun and serve God." 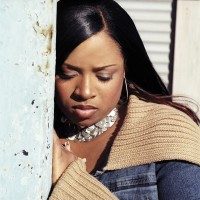 Kierra had still to graduate from high school when 'I Owe You' was released. But with its sassy street beats and its relentlessly soulful vocals it proved to be an instant smash becoming the first album to bow in at number one on the Billboard Top Gospel Albums chart. Kierra told Billboard, "I was really excited but I was speechless. I knew for a fact that it's only because of God that it happened, because I'm just starting out and he just let me go to number one."

In 2004 the demand for another Kierra 'Kiki' Sheard album was so great that, possibly unwisely, EMI Gospel pushed out a remix album, 'Just Until'. It sold pretty well considering how tough it was for remixers like Carlin 'Godson' Mukkular, Paul Boutte and Brother Wilson to improve on the tracks from the 'I Owe You' classic. Now at last a new set of songs, 'This Is Me', has been released. In fact, the new album comes in two versions. 'This Is Me Special Edition' features the entire 12-song album plus five bonus cuts and a live version of the title song. Kierra is justifiably proud of her new project. She told CCM magazine, "The album tells of my experiences as I mature as a young adult. This record is actually my testimony and me just having to go through life experiences. That's why it's called 'This Is Me'." For the Warryn Campbell and Dark Child Entertainment-produced record, Kierra co-wrote seven tracks, symbolic that songwriting has become 'Kiki's form of journaling. "And I tell my journal ALL of my business! Today, I am someone who can actually sing and cry and feel what I'm singing because I've actually been through an experience. Now, I know that Jesus is real. 'This Is Me' is a song anyone can sing because we say, 'Lord, I'm asking that you accept me even thought I make the decisions that I make. Lord, this is me, and I'm talking to you. Nobody else, just me and you. So please here my cry.'"

Today Kierra divides her time between her musical career and studies at Wayne State University in Detroit, where she plans on majoring in criminal law. But her passion for ministry is clear. She said, "My highest hope, in ministry and music is simply for it to continue. I want to be able to travel around the world and draw people not because 'Kiki is coming to town' but because I hopefully have a powerful ministry, and the Lord is using me to reach out to people who haven't yet found Christ."

With Kierra's "Let Go" from her 'I Owe You' recently becoming a smash gold single in Japan - one of the least evangelised nations on earth - that seems to be a wish God will fulfil in Kierra's life.

I love u kierra u r so talented and look just like your mom. And I love this album I owe you I cry every time I hear it. Be blessed love u

i love the passion that kiki has shown in her music even as a child she is an amazing person as well as an amazing singer, its young singers with such faith that shows that there is nothing wrong with being young and praising....GOD BLESS YOU KIKI

I love to her you sing.I think you have a beautiful voice.You are living my dream right know.Keep up the good work.

Mattie Moss Clark is the biological sister of bill moss. She was married to Rev Clark who has a church on puritain and livernois area. Before him Dr. Mattie Clark was a Mccoullgh. She was not married to Bill Moss. His wife was Essie Moss.

I just love Kiki!!! she is sooo inspirational to the youth!! keep it up girl!!!

Hello, my name is Gigi! I just wanted to let you know that you are a wonderful gospel singer. I love the way that you sing and give God your all. I don't have respect for everyone, but i have much respect for you and i want you to know that i love you! I plan on coming out with a cd soon of my own and i would just love for you to send me some do's and dont's! If you would please! I know that your a busy woman, but i would like that. Thanks, love Gloria "GiGi" Collier!!!!!!!!!!!!!!!!!

I,am a Evangelist Missionary of the church of god in christ and i world like to know how can you get kiki to come to your church would you please let me know thank you Evangelist Naomi

I LOVE ME SOME KIKI! She is such a blessing and I pray that she keeps doing what she is doing. She gives praise a whole new meaning, so Kiki if you read this your self know that I love you and be blessed!