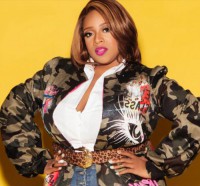 R&B GOSPEL singer Kierra Sheard, who has had such Cross Rhythms radio hits as 2004's "You Don't Know" and 2008's "Won't Hold Back", has released a single, "Don't Judge Me", with mainstream hip-hop icon Missy Elliott. It is released on RCA Inspiration who are also releasing a solo recording of "Don't Judge Me" together with a music video.