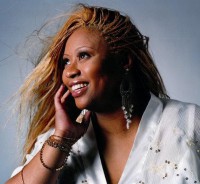 The singer, whose songs "Nite Life", "Unspeakable Joy", "Learn 2 Luv" and "Supernatural" are considered house music classics, died from kidney failure in Chicago aged 48. The New York-based label Nervous Records, for whom Kim recorded many of her biggest hits, announced the singer's passing thus: "It is with great sadness that we announce the passing tonight of Kim English. Kim's discography includes several songs that are widely recognised as all-time classics in the house music genre. She had a unique ability both through her singing and song-writing talents to inspire people to dance and also celebrate the joys of God and religion. She was a deeply religious and devoted member of the Family Christian Center in Munster, Indiana. While she had many opportunities to travel the globe as a singer, she remained a devoted family member and member of her church, and never allowed herself to be distracted from the path she felt was right for her."

Kim was born on 6th September, 1970, to Annie (Herron) English, a schoolteacher, and Ronald English, a corrections officer. She went to high school at Kenwood Academy in Chicago, studying under the famed vocal teacher Lena McLin, whose students have also included the opera baritone Mark Rucker and R&B star R Kelly. On the list of more than 20 influences on English's Facebook page, Ms McLin appears first.

In the early 1990s, the Chicago house DJ Gershon Jackson brought Kim to the attention of the vocalist Byron Stingily of Ten City, a Chicago trio of vocalists, songwriters and producers that combined house and R&B. "Her voice actually reminded me, very much so, of Anita Baker's voice," Stingily said in an interview. "And to hear that smoky alto voice on a dance song, it was just so unique and so different at the time."

Her career as a dance diva took off when Stingily gave a copy of the Ten City/English collaboration "Nite Life" to Little Louie Vega of Masters At Work, who passed it along to the New York club label Nervous Records. "I did know right away the song had something special," Mike Weiss, a founder of the label, said in an interview. "And once I knew that Masters At Work were going to be doing the remix, then it really was an automatic for me."

Masters At Work (Vega and Kenny Gonzalez, known as Kenny Dope) were in-demand remixers, and "Nite Life" was licensed to Polydor in Britain, where it hit the Top 40. In America, where house music was still an underground phenomenon, it was played at Vega's small but influential Underground Network party at the Sound Factory Bar in Manhattan. Weiss said that English's first live performance was there, in 1994.

Remembered Weiss, "She did it in front of the key individuals and all the key tastemakers in the house music community. She really wasn't so comfortable onstage, and it was really putting someone in the spotlight without having had any experience in the New York community - but she did great. The song was so strong that as soon as she sang the chorus, everyone started singing along."

The Armand Van Helden remix took "Nite Life" to another level in Europe, according to Weiss. Soon, thanks to mixes and remixes, Kim's voice was being matched with house heavyweights like David Morales, Mood II Swing, FranÃ§ois K and Todd Edwards. Kim's manager Vickie Markusic said that once English's production deal with Ten City was over, she wrote more of her own songs. In 1999, a song she co-wrote, "Unspeakable Joy," a Maurice Joshua production, got major club exposure. On it Kim testified, "When I wake up, in the morning, gets me out of bed/Keeps me running, skipping, jumping like a little kid."

Explained Weiss, "As her career and her writing got more developed, she did push more and more toward the religious base. She also wanted to have the word 'God' in the songs. I'm very open-minded when it comes to religion, but I did feel like having 'God' in a song all of a sudden, you might limit the audience a little bit."

After "My Destiny" in 2007, Kim became a full-time student at Purdue University. She earned a bachelor's degree in child and family services and joined the historically black sorority Zeta Phi Beta. She remained active in both music and church, singing in the choir of the Family Christian Center megachurch in Munster, Indiana. She was performing her own music live as recently as last year.

"Kim's mission has always been to minister to people through music," Markusic said. "I've seen some amazing stories. I've been in situations where I've been in a club and had one of the club kids come up crying to Kim about how she saved her life from suicide."

In 2014, English was put on a dialysis machine, awaiting a kidney transplant. Sadly, that never materialised.