Kosmos Express: A band with a desire for individuality 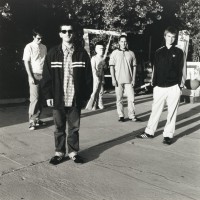 United Christian Broadcasters, who are increasingly having an effect in deciding which of the ocean of new releases by "unknown" American Christian artists is going to sell in the UK in significant numbers, have decided that Kosmos Express have that certain something. Their 'E.B.T." is currently on the UCB Cross Rhythms 'A' playlist, and such is the strength of their 'Now' album that "Little Tree" and "Dream Maker" are strong enough to get there too in due course. The strength of the Los Angeles-based band is their songs, written by the band's vocalist/lead Rob Goraieb. Rob has found his own unique location when songwriting - the bathroom.

"I'm not going to the bathroom when I write," Rob clarifies. "It's just that it's quiet in there, and no one disturbs you when the door's shut. Plus, the confined walls of a bathroom give my voice great reverb."

Rob put together Kosmos Express with a strong batch of tight, hooky rock songs in less than six months. They signed with Sublime Records not long after, and instantly went into the studio to record their debut, 'Now'.

The appeal of the band's music rests heavily in their brilliant '90s interpretations of older British influences. While most US bands still seemingly try to sing like Eddie Vedder (including the singer of Hootie And The Blowfish) or play like Nirvana, Kosmos Express looks to the Beatles, the Who and even the Jam for their inspiration.

Kosmos Express cling to their desire for individuality in everything from their unusual name to the way they portray their faith. "We are named after a Paul Weller song called 'Kosmos'," Rob explains. "I'm not sure what the song really means, but to me it meant a search for God without boundaries or expectations. This is the way we want to express our faith."

Kosmos Express also try to offer a unique perspective on Christianity through many of their song lyrics and themes, not that the band's lyrics are always easy to follow. Rob's words are extraordinary; total-consciousness splurges of lurid imagery, the anathema to meat-and-potatoes Jesus song devotees. Yet Kosmos Express are very committed to the spiritual dimension of their art. Says Rob, "We're a band who live what we believe on stage and off. This philosophy comes through in our ministry and our music. As a ministry we're not ashamed to be Christian, we want people to see us and to be turned on to Christ by our honesty in a non-pushy and non-judgmental presentation."

A surefire tip for future UCB playlists is "Beautiful". Commented Rob. "'Beautiful' is a song about the beauty of being in Christ's presence. It's very influenced by the classic book The Practice Of The Presence Of God by Brother Lawrence.

Finally, Rob was asked why his album was called 'Now'. "Oswald Chambers once said 'now' should be one of the most lived-by words for a Christian. I really liked that. Also the title is a '60's mod idea from England, the focus being on what was current rather than being bogged down in the past - moving forward in your life. I've always subscribed to that point of view."