Krzysztof Penderecki: The Polish composer who's moved from the avant-garde to neo-romanticism

In the Living Composer Society series, John Irvine looks at the life of composer KRZYSZTOF PENDERECKI. 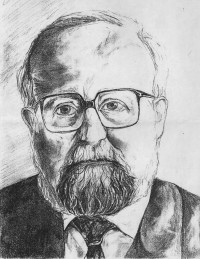 Poland has always suffered. For centuries it was divided between the Russian Empire in the east and the Austrian Empire in the west, with the Polish language and culture discouraged and even banned. Poland reappeared on the map in 1918 under the protection of the League Of Nations - a peace which was to prove short-lived as in September 1939 Hitler and Stalin carved up Poland between them. 1945 saw peace with a communist government nobody liked and a massive Soviet army of occupation. This especially was greatly resented by a people who are fiercely patriotic, fiercely anti-Russian and fanatically Roman Catholic. Economic disasters and food shortages brought things to a head in the early 1980s with the emergence of Solidarity and the imposition of martial law. And now, in the wake of free elections and in a post-communist climate, the sufferings of Poland continue: economic stagnation, lack of investment in education and industry, the worst industrial pollution in Europe. This is the world of Penderecki and his music.

Krzysztof Penderecki was born in Debira, Poland in 1933. His childhood was dominated by the war as the Germans marched from the west to round up the Jews for slaughter, and the Russians marched from the east to remove the Germans. These experiences left him with strong feelings about freedom - he detested anything which symbolised the deprivation of personal liberty. This facet of his character was to emerge in his compositions.

At age 18 he began studying at the Krakow Academy Of Music, graduating in 1958. Six years later, after repeated naggings from his father, he entered three of his compositions in a national competition. The unknown Penderecki took the top three prizes, and became an overnight success within Polish cultural life. He developed his own brand of "texture music" and his own musical language to accommodate it. "Texture music" is a method of composition where the overall effect of the music is important and not just its individual components, where noise and clusters of adjacent notes are employed to create the mood of the piece. "Threnody For The Victims Of Hiroshima" (1960) epitomised this approach, summing up his experimental techniques into eight minutes of apparently hopeless and cataclysmic atmospheres, creating an emotionally charged piece, a piece which was to set Penderecki apart from his contemporaries and bring him international success.

1962 saw the beginning of a process which was to carry Penderecki through 'The Passion', 'Utrenya' right down to the 'Polish Requiem'. He began to blend into a unity materials which at first sight appeared completely contradictory. Gregorian chant, Renaissance vocal polyphony and his own unique style were brought together for "Stabat Mater", a piece which became very popular both in Poland and abroad, and was incorporated into the second part of "St Luke's Passion" (1966). "The Passion", commissioned for and first performed at the 700th anniversary celebrations of the Munster Cathedral in Germany, allowed Penderecki to make his debut on the world's 'mainstream' classical music stage. The piece brought him to the attention of concertgoers not especially interested in modern music. Critics called him 'the creator of contemporary music for those who hate it' and began to wonder if Penderecki had betrayed his avant-garde roots. The truth was, Penderecki was no fool. Avant-garde experimental music could sustain interest for up to 10 minutes, say, but a larger work of 80 minutes would need to have 'experimental' passages separated by conventional passages which would help to increase the power and effect of the 'advanced' music.

'The Passion' received a rapturous reception from the press and spread throughout the world with incredible speed both on record and in performance. Commercially and critically, Penderecki was a success. On a more personal level, he felt that he had achieved a measure of reconciliation between the German and Polish peoples. He felt that his music of the sufferings and death of Jesus had enabled wartime wounds to be healed in some way. Penderecki did not leave Jesus in the grave: his "Utrenya" of 1969-71 dealt with the resurrection and was written in response to a commission from the Russian Orthodox Church. Penderecki was thus able to offer himself as a peacemaker to both past enemies, the Russians and the Germans.

"Utrenya" was in two parts and with the Passion it was performed as a sacred trilogy in Poland and the west.

Penderecki continued the religious theme when he began work on an opera to be based on Milton's 'Paradise Lost'. Writing this was to keep Penderecki busy for most of the early 1970s. It gave him an opportunity to show the world that his style was maturing and that the romantic masters of the past - Bruckner, Wagner, Sibelius -were beginning to be valued by him. Their influence was very apparent in "Paradise Lost", which opened to mixed reviews in 1976 in Chicago. Critics refused to take the subject matter seriously, although Penderecki believed every word of the text about the fall of man and his need for redemption in Christ. The opera proved to be too expensive to put on, and it sank without trace after only two years, leaving only a short "Adagietto" (1979) as an epitaph.

1979 saw Penderecki hard at work on two pieces: a Te Deum in honour of fellow Pole and old acquaintance, Pope John Paul II; and a second symphony. Penderecki found writing his symphony difficult until Christmas 1979 when the carol Silent Night provided the missing key for the work's completion. Despite its subtitle "Christmas", the second symphony is dark and sombre, with the carol providing a brief ray of hope in a dark and dismal picture. Critics could not believe their ears: so much overt tonality sounded like a century's retrogression, a complete betrayal of the principles of the avant-garde to which Penderecki had once belonged. The tendency towards tonality and neo-romanticism continued with both the Cello (1982) and Viola (1983) Concertos. Despite the influence of Bruckner in particular, these works bear the distinctive Penderecki stamp. He had not 'sold out' - he was simply writing music he enjoyed, music which reflected 25 years of reflection and a process of maturing. He had come a long way since his youthful successes.

On the occasion of his 50th birthday, Penderecki received the 'Banner Of Work, First Class' from the head of state, General Jaruzelski, for which Penderecki received universal condemnation. He made his position clear: "I express myself through my sacred music, which I have been composing for 25 years in this communist country. My position (as a Catholic) must be clear... I can only be so thankful that as an artist I have been honoured in spite of ideological differences of opinion." The early 1980s saw the tension between the independent trade union Solidarity and the communist authorities grow steadily worse. In December 1981, martial law was suddenly declared. Despite Penderecki's involvement on a cultural level with Solidarity, no action was taken against him. However, the tensions and the deep divides evident in Polish life drove Penderecki to complete his life's greatest work, the "Polish Requiem" (1984).

The Requiem is more than a requiem mass, however: it is a cry for national unity, and a way of expressing national sorrow. Almost every section commemorates an aspect of Polish suffering, from the Katyn massacre during the war to the death of Cardinal Wyszynski in 1982, a man seen by many as Poland's last hope of avoiding virtual civil war. He was also a close friend of Penderecki. The Requiem is a mass of suffering, a mass of crucifixion; but also a mass of hope, of resurrection. The Requiem ends with the plea that the souls of the departed "pass from death to life", a plea echoed by the living that Poland might also be saved.

Krzysztof Penderecki was, and is, essentially a private man, despite his international standing. It is difficult to get to know Penderecki the man -even Wolfram Schwinger's excellent biography published by Schott & Co reports what Penderecki says or does - never do we see a glimpse of Penderecki's own views and beliefs. As far as his Catholic beliefs go, one gets the impression that faith is something that Penderecki returns to, rather than faith being the motivating force of his life. Faith does not compel him to write - he writes because he is a composer and a musician. His Catholic faith then shapes this compositional process, and as a result, he has written some of the greatest sacred music of the 20th century. That is his achievement and his legacy.