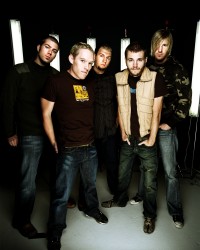 Why call your album 'Sea Of Faces'?

Jon: The title of the album has kind of been a theme throughout our music, about a relationship between us and God. The whole song is just talking about the miracle and how amazing it is that out of everyone that's in this world - the millions and millions of people all around us - somehow God knows, loves and cares about each and every one of us. individually. Not only that, but he sacrificed on the cross for us individually, as well. It's just kind of a contemplation of how amazing it is that God, in his sovereignty, is still willing to know and care and love all of us individually. You know, the Bible even talks about how he knows the numbers of hairs on our heads. It's something that I'm amazed by and don't fully understand. But I'm really blown away by it.

Both your albums were produced by Aaron Sprinkle. How has it been working with him?

Jon: Honestly, we almost see him as a sixth member of our band in many ways. He means a lot to us and we feel really privileged to work with him. The biggest thing he taught us was how to write for radio. We had a tendency, when we first came into the studio (for the debut album), where we had some songs that were just too long. And right away, he was able to show us how to keep our songs short. We need to dig into the chorus quickly, and you've got to have a good hook in that chorus to catch the listener's ear. It was funny, because we'd come in with a six-minute song and he's like, "That's not gonna work. We've gotta cut something off." And if you look at the new Linkin Park record, all the songs are, like, three minutes, and three-20, two-50. They're all really short. And good producers will typically keep your songs short, because it keeps the listener's attention. But before, being on the professional side of the industry, I never thought about keeping the songs short. I was just making music.

What would you say is Kutless' mission?

Jon: Primarily, our first focus is to reach unsaved people. We hope our music is good and fun enough to bring people in who aren't Christians. Hopefully we'll be able to open their eyes and the door to them to realise, for the first time, that you can rock out, have a good time and still be a Christian. Our second mission is to provide an alternative to our fellow Christian brothers and sisters. There is a lot of music out there that is very negative. so we hope our band can be an alternative to that, and Christians can have fun and be encouraged.